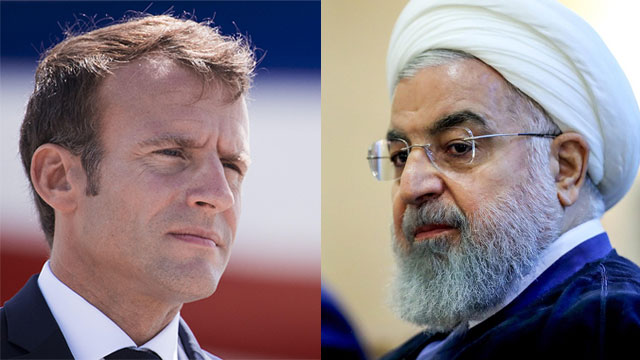 PARIS, Oct 26 (Reuters) – France has expelled an Iranian diplomat in response to a failed plot to carry out a bomb attack at a rally near Paris organised by an exiled Iranian opposition group, diplomatic and security sources say.

France’s foreign ministry said on Oct. 2 there was no doubt the Iranian intelligence ministry had been behind the plot against the June 30 rally. It subsequently froze assets belonging to Tehran’s intelligence services and two Iranian nationals.

About a month ago it went a step further, expelling an Iranian diplomat based in Paris, five sources said. Two of the sources said the diplomat was an Iranian intelligence operative under diplomatic cover.

A spokesman at the Iranian embassy in Paris did not respond when asked about the diplomat’s expulsion. Iran has previously said it had nothing to do with the attempt to carry out a bomb attack at the rally. One Iranian official, who declined to be identified, denied there had been any expulsion.

French President Emmanuel Macron’s office referred all enquiries to the foreign ministry, which said it would not comment.

The fallout from the failed plot has further strained ties between Paris and Tehran, especially as France has been one of the strongest advocates of salvaging the nuclear deal between Iran and world powers, which U.S. President Donald Trump withdrew from in May.

The initial move by France to impose asset freeze was deemed relatively symbolic since neither diplomat targeted was based in France or had assets in the country.

French officials at the time said Paris considered the matter closed, although they were still trying to determine how high up the hierarchy the order to carry out the attack came from.

The decision to expel a suspected intelligence operative raises attention to the issue again.

“Yes, it’s true,” one diplomat said of the expulsion, declining to give further details because of the sensitivity of the issue.

The two sides agreed not to divulge details of the expulsion fearing it could undermine talks between the remaining parties to the nuclear deal – France, Britain, Germany, Russia, China – who are working on ways to continue trading with Iran, two diplomats said.

Two diplomats and one Western security source said the move was directly linked to the plot, which targeted a meeting of the National Council of Resistance of Iran (NCRI).

A co-ordinated intelligence operation between French, German and Belgian services thwarted the planned attack in the days prior to the rally which attracted many VIPs, including Trump’s lawyer Rudy Giuliani and several former European and Arab ministers.

Belgium on Oct. 10 charged an Iranian diplomat, who was one of the two sanctioned by Paris, and three other individuals with planning to bomb the gathering.

Any hardening of relations with France could have wider implications for Tehran as a new round of even tougher U.S. sanctions targeting the oil sector and financial transactions come into effect from Nov. 4.

France had warned Tehran to expect a robust response to the thwarted bomb plot. Macron and Foreign Minister Jean-Yves Le Drian spoke to their Iranian counterparts about the issue at the U.N. General Assembly meeting after demanding explanations over Iran’s role.

An internal French foreign ministry memo in August told diplomats not to travel to Iran, Reuters reported, citing the bomb plot and a toughening of Iran’s position towards the West.

Paris has suspended appointing a new ambassador to Iran and has not responded to Tehran’s nomination of a new envoy in France, underscoring how sensitive the issue is.

No appointments are expected until France receives more detailed information on who was behind the bombing attempt, two senior French diplomats said.

“We are still following up with Tehran on the Villepinte affair to draw all the necessary consequences, but the political and diplomatic dialogue between Iran and France continues,” said one senior French diplomat. (Additional reporting by Marine Pennetier and Emmanuel Jarry in Paris, Andrea Shalal in Berlin; Editing by Richard Balmforth)

Iranian Terrorists Lurk Abroad in Guise of Diplomats, Dissidents Report
Comment
Tehran Recognizes Iran Opposition as the Alternative; So Should We