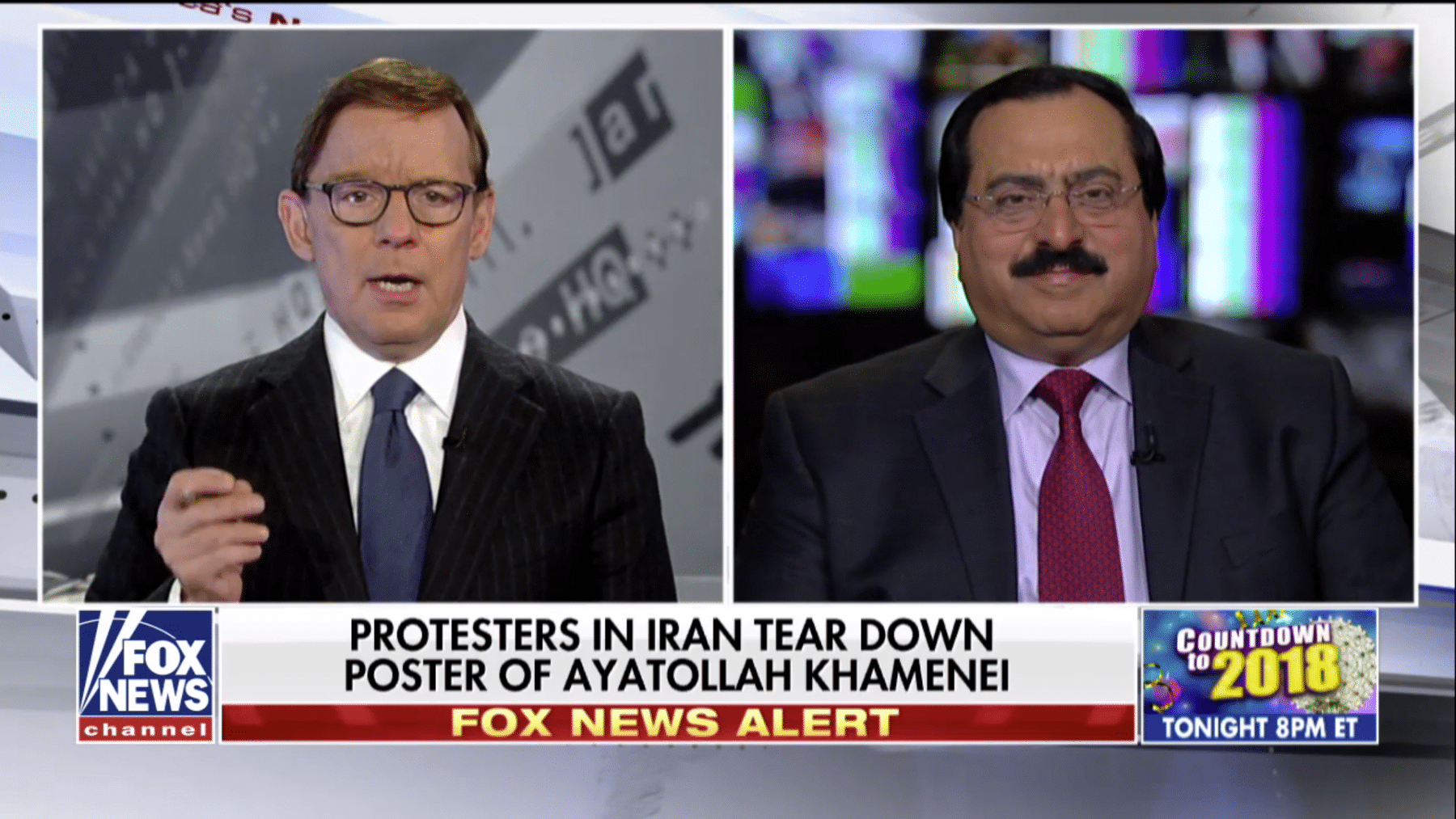 Eric Shawn: We are looking at video from social media that we are told is of protesters tearing down a poster of supreme leader Ayatollah Khamenei in Iran and that’s a once unthinkable act there. It is one of the most repressive countries on earth, as you know… There are growing street protests that are continuing for a fourth day. Some are wondering if they are now at a tipping point against the Islamic regime that could finally lead to it’s downfall. Joining us now is Alireza Jafarzadeh; he is the Deputy Director of the U.S Office of the National Council of Resistance of Iran in Washington and author of the book The Iran Threat.

First question, what is your reaction when you see that? When you see the Khamenei poster being brought down, did you expect such widespread protest to suddenly explode?

Alireza Jafarzadeh: Well certainty I did expect that because this is not happening overnight. It has been weeks and months of anti-government demonstrations prior to that, that was primarily focused on the corruption and the plundering of the wealth. But the tipping point was on Thursday, when in Mashhad, large demonstrations started focusing on Khamenei, the Supreme Leader, and Rouhani, the President, chanting death to Khamenei, death to Rouhani and then it suddenly expanded to other cities. As we speak, so far, 80 cities have been engulfed in anti-government demonstrations. Just today, 37 cities were involved in the demonstrations against the regime, people chanting death to Khamenei, death to Rouhani and they were saying “we want independence, freedom, and an Iranian republic,” that’s the kind of government they liked to see.

And I think that what you see is very reminiscent of the 2009 uprising, but I feel it is far deeper than that and a lot more promising, because now on the top, there is a big rift among the different factions of the regime, each faction is blaming the other. Second, in terms of the population, the discontent is so deep and widespread and it’s expanded to other cities much more than it was in 2009. Third, there is an organized opposition group, you know the network of the Mojahedin-e Khalq, or the MEK, has been active in Iran. This is the group that exposed all the major nuclear sites of Iran. The members of the group, have been the main victim of political executions in Iran over the past three decades. Over 90% of those executions belong to this group and most of the political prisoners belong to this group.

Alireza Jafarzadeh: Well, certainly. Just this past Friday, seven Friday Prayer leaders in various cities, including Mashhad where the whole thing sparked from, talked about the MEK and are showing the fear of the government because they know this is the group that has the ability to organize, it has the whole history and background of standing up against the Iranian regime, and it has very clearly defined their leadership, and ready to pay the price. Because in order to lead the movement, you need to be ready to pay the price and be out there, day-in and day-out, and be among the population. And that is where the MEK is right now.

Alireza Jafarzadeh: Well um, Eric I think that whatever sounded that was to be benefiting the Iranian regime over the past few years is now coming back to haunt them. Because all the money that was provided to the Iranian regime that actually did benefit the Revolutionary Guards did benefit their network in Syria, in Yemen, in Bahrain, in Lebanon, and other places is now coming back to haunt them because people say that money shouldn’t go there. They are saying “leave Syria alone, think about us.” They are saying ”No Gaza, No Lebanon, my life is for Iran.” 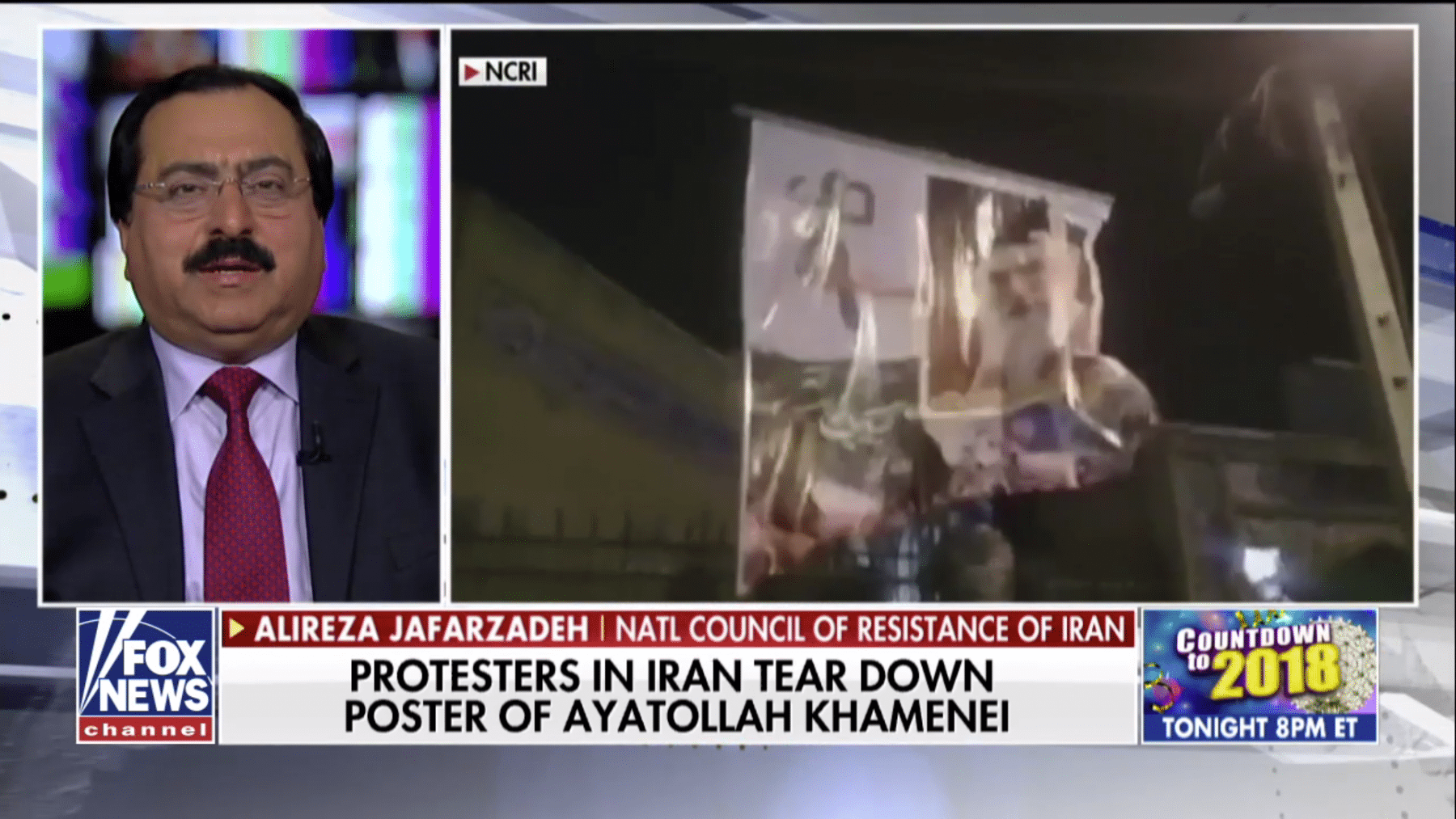 Eric Shawn: So how far does this go? I mean, we saw what happened in the Green Revolution and President Obama came under some criticism for not speaking out strongly. Now you’ve got President Trump, you know here are the tweets today “The whole world understands the good people of Iran want change, Other than the vast military power of the United States, Iran’s people is what their leaders fear most. The USA is watching very closely for Human Rights violations.” You’ve got the President, very strongly, coming out in support of these demonstrators.

Alireza Jafarzadeh: And Eric I think that is very significant because you remember in 2009 when people expected the President of the United States to stand with them. When he didn’t and he was just waiting for the movement to be crushed so that they can go back to negotiations, people showed their sentiments in the streets by chanting “Obama, Obama are you with them (with the regime) or with us,” showing that they really want to see support of not just the president of the United States, but all of the free world. It is so important that President Trump has taken this stance over that past four days, everyday making a statement very clearly, showing his support on the side of the Iranian people.

Eric Shawn: And will that make a difference, finally?

Alireza Jafarzadeh: It certainty makes a huge difference because it creates encouragement among the population, creates fear among the ranks of the Iranian regime, which is very divided right now. It creates fear among the ranks of the Revolutionary Guard and I think that needs to be coupled with specific steps. Not sending arms, or troops, or money to the opposition they don’t need that, but taking specific measures that would weaken the regime, such as designating the top officials of the regime as major violators of human rights, because they have been involved in the killing of so many people over the past few years. Imposing new sanctions would limit the resources of the Iranian regime.

Eric Shawn: Well, we will see if the government of the United States can take those actions as demonstrations continue, we hope they are peaceful. But the Iranian people are speaking out.