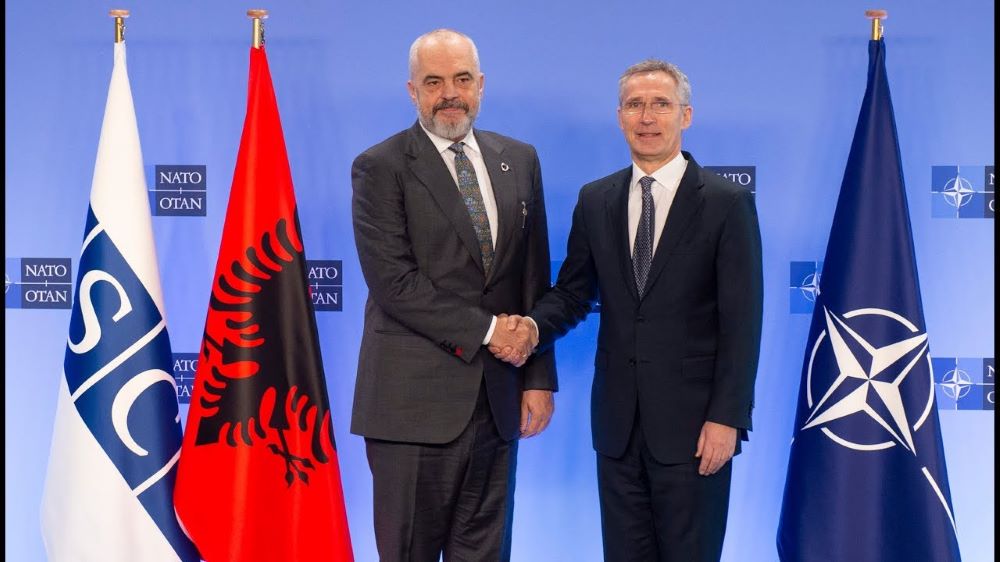 Edi Rama, the Albanian Prime Minister, reiterated on Wednesday that his country will not change its approach vis-à-vis the Iranian opposition group, the People’s Mojahedin Organization of Iran (PMOI, Mujahedin-e Khalq or MEK).

Prime Minister Rama made the announcement at a joint press conference with Jens Stoltenberg, the Secretary General of the North Atlantic Treaty Organization (NATO) in Brussels on January 29.

Prime Minister Rama Also referred to the recent expulsion of two of the Iranian regime’s so-called “diplomats”, de-facto terrorists, for “activity incompatible with their diplomatic status” – a phrase that has previously been used in cases of spying. These terrorists were identified as Mohammad Ali Arz Peimanemati and Seyed Ahmad Hosseini Alast. Albania had also expelled the regime’s ambassador Gholamhossein Mohammad Nia and Mostafa Roudaki, a member of the Ministry of Intelligence of the regime in December 2018.

“Albania has accepted to give shelter to several thousands of people, life of whom has been threatened by the regime of Tehran. It is part of what we are, of our tradition. We have done also this thing as a humanitarian operation. We will not change our tradition and approach towards these people. As for the wrongdoing activities in Albania, we have expelled the diplomats and other people that are outside the regular activity of diplomatic part,” said Prime Minster Rama.

Albania accepted to host around 3,000 members of the MEK. Prior to their relocation to Albania, the MEK members were in Camp Liberty, Iraq, where they were repeatedly attacked by the Iranian regime and suffered an inhumane medical siege. Before being relocated to Camp Liberty, the MEK members were at their 30-year home, Camp Ashraf. Yet, in 2009, when the United States withdrew its forces from Iraq, it handed MEK’s security to the Iraqi government, led by Prime Minister Nouri-al Maliki, an agent of the Iranian regime. Maliki immediately imposed a medical blockade on Ashraf and attacked the MEK members several times, despite the fact that they had protected person status under the 4th Geneva Convention. Maliki forced the MEK members to be relocated to Camp Liberty, a much smaller camp where they could be easily targeted with missiles. The regime’s plan was to either massacre all the MEK members in Iraq or force them to succumb, via imposing harsh living conditions on them, to the ruling theocracy in Iran. Yet, this plan failed due to the MEK members’ steadfastness and an international campaign led by Mrs. Maryam Rajavi, the president-elect of the National Council of resistance of Iran and the help of renowned personalities; and, of course, Albania’s leading role in accepting the MEK members.

Other European countries must learn from #Albania. Representative offices of the Iranian regime are centers of espionage and terrorism. #Iran — Maryam Rajavi (@Maryam_Rajavi) January 15, 2020