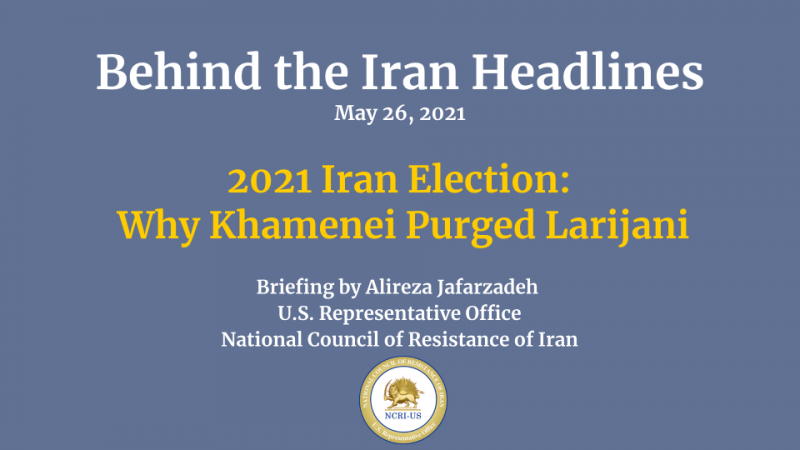 But what happened this week was unprecedented. Khamenei disqualified several longtime establishment figures, most significantly Ali Larijani, former speaker of the regime’s parliament for 12 years. An IRGC brigadier general and Secretary of the Supreme National Security Council, Larijani has been a senior advisor to Khamenei and a member of his inner circle.

Why would Khamenei bar him; what is the message? The reality is that this regime is so weak, so vulnerable that it cannot risk losing even to Larijani, a long-time ally.

Khamenei knows that the society is highly explosive, he has seen the people’s determination to change the regime in uprisings since 2017. He knows there is going to be massive boycott of the elections. He has no choice but to devour his own allies who are not 100% for him.

To preserve the regime, the Supreme Leader needs Ebrahim Raisi, notorious for the massacre of some 30,000 political prisoners in 1988. Raisi’s main task has been to eliminate the main Iranian opposition force, the Mujahedin-e Khalq.

Khamenei needs the IRGC and its Quds Force to stay in power. The Hardliner-Moderate game has been put aside, and the true fight between the people of Iran and the entirety of the regime has been recognized by Khamenei and Raisi. But its too little, too late; the tide has already turned. Khamenei has further narrowed the theocracy’s power base, and the momentum is on the side of the people who seek a FREE IRAN.