2020 “Free Iran” Summit in the Eyes of the World Media 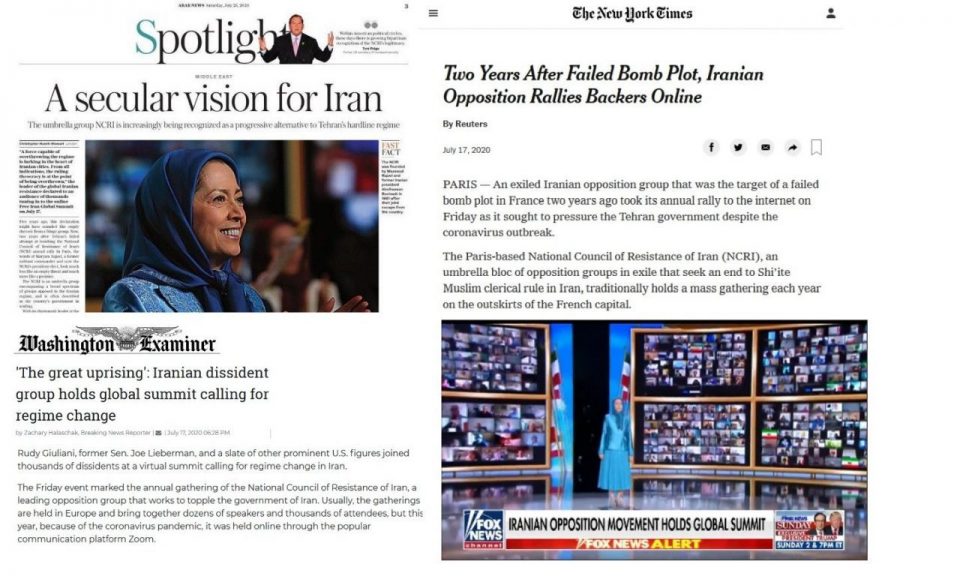 The Iranian Resistance’s annual “Free Iran” Global Summit was held on July 17-19, this year online. Politically, organizationally, and technologically, it represented a milestone underlining the viability of the National Council of Resistance of Iran (NCRI) and its main member organization, the People’s Mojahedin Organization of Iran, also referred to as the Mojahedin-e Khalq (MEK).

An impressive array of speakers from all sides of the political spectrum gathered in the largest-ever virtual political gathering. Attendees included 1,000 international dignitaries, politicians, and parliamentarians from 6 continents and 102 countries. The three-day summit, which connected 30,000 locations, was an impressive display of the Iranian Resistance’s ability to adapt and push forward despite the pandemic.

Not surprisingly, the event attracted the attention of many media outlets across the globe, reporting on different aspects of the conference even before it was held. Excerpts from some of the English-Language reports follow.

In its America’s News segment, Fox News had a live report of the summit’s inauguration by NCRI President-elect. Maryam Rajavi:

JOHN ROBERTS: “A bipartisan group of U S policy figures today, participating in a virtual event, calling for a regime change in Iran… Benjamin Hall is live in London for us with more. Good morning Benjamin.”

BENJAMIN HALL: “Good morning, John. This is a major event that takes place every year. It’s run by the NCRI, who are the largest Iranian opposition group in exile. Some call them the government-in-waiting. But this year, because of the coronavirus, it had to be moved online. It is now virtual. But the message is the same, that the Iranian theocratic regime must be overthrown. And it’s a reminder of the threat that they pose.

“Hundreds of thousands have joined from around the world. Lawmakers and others, including Rudy Giuliani, a former FBI chief, CIA chiefs, Homeland Security chiefs, all signed a letter, all participating…

“Today’s event comes after a year of major protests in Iran and the NCRI claim they have active units on the ground, fomenting this unrest. Observers believe that the people of Iran are now fed up with the corrupt mullahs. They are pushing for a new start in a country whose economy lies in ruins… But the message today is clear. The Iranian regime is still a threat. They continue on their path towards building a nuclear device, and they cannot be negotiated with.”

“An exiled Iranian opposition group that was the target of a failed bomb plot in France two years ago took its annual rally to the internet on Friday as it sought to pressure the Tehran government despite the coronavirus outbreak.

“The Paris-based National Council of Resistance of Iran (NCRI), an umbrella bloc of opposition groups in exile that seek an end to clerical rule in Iran… was responsible for arguably the most influential opposition move in years when it became the first group to expose Iran’s covert nuclear program in 2002…

“Eighteen sitting U.S. senators were among those who spoke on Friday, as did U.S. President Donald Trump’s personal lawyer Rudy Giuliani, who has repeatedly backed the group.

“’The mission of our generation is to overthrow the mullahs’ criminal regime and to restore the trampled rights of all the people of Iran,’ the group’s leader Maryam Rajavi said during the six-hour event.

“The online rally comes just two days after an Iranian diplomat and three others were ordered to stand trial in Belgium over their role in a failed plot to carry out a bomb attack at the NCRI gathering near Paris in 2018.

“Tehran has long called for a crackdown on the NCRI in Paris, Riyadh, and Washington.”

“Rudy Giuliani, former Sen. Joe Lieberman, and a slate of other prominent U.S. figures joined thousands of dissidents at a virtual summit calling for regime change in Iran.

“The Friday event marked the annual gathering of the National Council of Resistance of Iran, a leading opposition group that works to topple the government of Iran.

“‘This summit echoes the voice of the Iranian people’s 40-year resistance against religious dictatorship and fascism and for freedom and democracy. This is the voice of the largest, the longest-standing, most sophisticated, and most serious organized resistance in Iran’s history,’ [NCRI President-elect Maryam Rajavi] said, emphasizing that the first commitment of the NCRI is the overthrowing of Iran’s current government.

“Rajavi said that hundreds of locations across Iran had protests during last November’s mass demonstrations and called those protests ‘a brilliant model for the great uprising’ that she expects to eventually come to the country of 81 million. During her speech, Rajavi also held a moment of silence for the thousands of Iranians who have died since the start of the coronavirus pandemic.

“At one point during the event, the NCRI aired recorded videos from dissidents in all of Iran’s 31 provinces. The videos featured people with their faces obscured to protect their identities, some holding up signs, calling for an end to Tehran’s theocratic rule.

“With prominent supporters from Europe and the United States, an exiled Iranian opposition group on Friday held its annual conference online to press for ‘uprising’ and regime change in Tehran.”

The AFP’s report went on to say: “The event at Ashraf 3 in Albania was addressed in person by France-based leader Maryam Rajavi who stood in front of conference delegates but also a bank of hundreds of screens as guests dialed in from outside. ‘Our first commitment is that we, the Iranian people and the Resistance, will overthrow the clerical regime and will reclaim Iran… The final word is that the mullahs have no solutions and their regime is doomed to fall in its entirety.’

“She claimed the organisation had sympathisers on the ground working to record the events in Iran, saying: ‘These activities serve as the spark for the uprising. They sacrifice their lives to keep ablaze the flame of uprising.’

“Iran’s theocracy is at the weakest point of its four-decade history and facing unprecedented challenges from a courageous citizenry hungry for freedom, prominent U.S. and European politicians said at a major international rally calling for the downfall of the dictatorship in Tehran.

“The Summit was organized and hosted by the multinational umbrella organization, the National Council of Resistance of Iran (NCRI) and its associate group, the People’s Mujahedeen of Iran (MEK). It was something of a technical marvel, uniting via Zoom tens of thousands of people from 102 countries and 30,000 locations around the world. Some Iranian resistance activists even joined the broadcast from inside Iran at tremendous risk to their safety, given the Khamenei regime’s history of violent crackdowns on internal opposition.

“Behind the logistical triumph was a simple message from the NCRI organizers, that Iran’s clerics and terrorist sympathizers are living on borrowed time. They said the leaders in Tehran are facing unprecedented anger from within and crushing external pressure…”

“‘This generation is a constant nightmare for the mullahs. Indeed, the clerics have come face to face with a rebellious generation against which they are vulnerable,’ NCRI President-elect Maryam Rajavi said during a passionate address Friday morning. ‘Today in Iran, one of the greatest battles and one of the greatest tests of our time rages on between freedom and religious fascism, between democracy and religious fundamentalism. This is a battle intertwined with the destiny of contemporary humanity and global peace and security.’”

The English language daily, Arab News, ran a full page article capturing the key message of the Free Iran Summit in its headline: “A secular vision for Iran – The umbrella group NCRI is increasingly being recognized as a progressive alternative to Tehran’s hardline regime.” The article went on to say:

“‘A force capable of overthrowing the regime is lurking in the heart of Iranian cities. From all indications, the ruling theocracy is at the point of being overthrown,’ the leader of the global Iranian resistance declared to an audience of thousands tuning in to the online Free Iran Global Summit on July 17.

“Five years ago, this declaration might have sounded like empty rhetoric from a fringe group. Now, two years after Tehran’s failed attempt at bombing the National Council of Resistance of Iran’s (NCRI) annual rally in Paris, the words of Maryam Rajavi… the NCRI’s president-elect, look much less like an empty threat and much more like a promise.

“With its charismatic leader at the helm and thousands of Iranian, Western and Arab supporters behind its cause, the NCRI is increasingly being recognized as the legitimate and progressive alternative to the supreme leader and the cohort currently in power.

“The NCRI… has three aims for Iran: The demise of the clerical regime, universal suffrage and people’s sovereignty, and social freedom and justice. Its swelling legitimacy, and the credible alternative it presents for Iran’s future, have not gone unnoticed among political and security establishments in the West.

“[Former Homeland Security Secretary Tom] Ridge spoke with Arab News during the summit, and explained his long-running support for the NCRI and stated that ‘Within American political circles, these days there’s growing bipartisan recognition of the NCRI’s legitimacy.’

“‘Recognizing the existence of both an internal and external opposition group that rejects terrorism and embraces principles like gender equality and, most importantly, a non-nuclear Iran seems to be in everyone’s best interest in the globe, not to mention regional states such as Saudi Arabia,’ he said.

‘After 30 years of bombings, violence, and targeted attacks, it is perhaps no surprise that the NCRI is so vehemently opposed to the regime’s use of terrorism as a tool of foreign policy.

“Ali Safavi, a member of the NCRI’s Foreign affairs committee, told Arab News that the group ‘aims to pave the way for more uprising, like those witnessed in Nov. 2019,’ when huge anti-regime protests swept across virtually every Iranian city and town.”

FoxNews.com also had a lengthy report on the Iranian Resistance’s summit:

“The top Iranian resistance group held its annual summit Friday, whose attendees included Trump lawyer Rudy Giuliani, who joined calls for the overthrow of the regime in Iran — calls that have been boosted by recent protests in Tehran and international pressure from the U.S.

“[NCRI President-elect Maryam] Rajavi, who has offered a 10-point plan to form a secular, democratic Iran, told attendees that the campaign for a free Iran had not been slowed down by the coronavirus pandemic, which had ravaged Iran and led to accusations that the regime has covered up.

“‘In this resistance and in this struggle for freedom, nothing has been stopped and we are moving faster than ever before, and today the whole world is with you and have joined your campaign for a free Iran,’ she told supporters.

“Meanwhile, a majority of members of the House of Representatives last month backed a bipartisan resolution that supports the Iranian opposition movement’s call for a secular, democratic Iran — and condemns Iranian state-sponsored terrorism.”