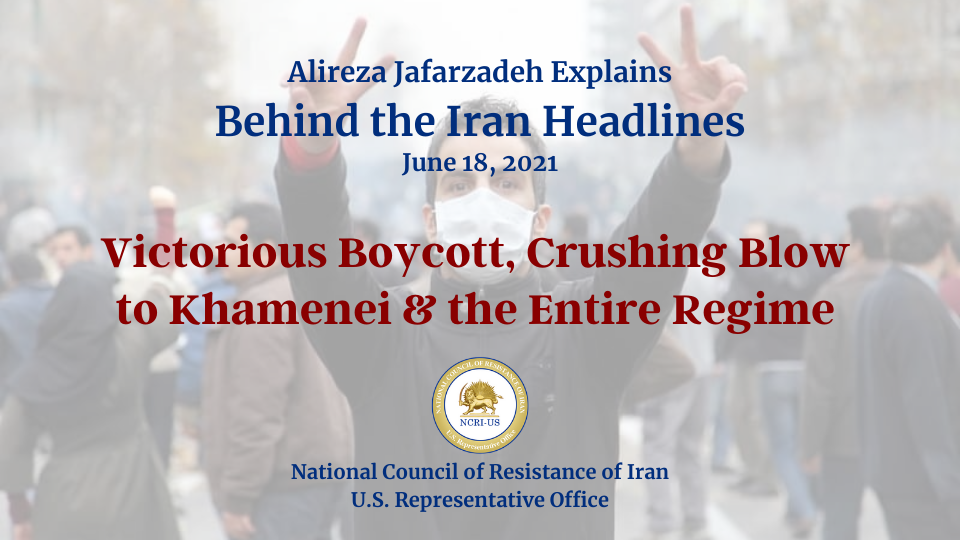 Alireza Jafarzadeh, NCRI-US Deputy Director: As predicted, there has been an unprecedented boycott by the people of Iran’s rigged presidential election. Mrs. Maryam Rajavi, the President-elect of the National Council of Resistance of Iran (NCRI), described the nationwide boycott as an extraordinary political and social blow to the mullahs’ Supreme Leader, Ali Khamenei, and the ruling theocracy.

Some 2,300 reports, pictures, and video clips of thousands of polling stations in over 340 cities in all 31 provinces, provided by the network of the MEK, documented the extent of the boycott of the sham election.

In an internal memo, an Interior Ministry official expressed concern that even with an extension of the voting time until midnight, the number of participants would not exceed 4 million out of nearly 60 million eligible voters, i.e. only 6.5%. Ali Khamenei and his protégé, Ebrahim Raisi, both literally begged people to turn out when casting their own votes today, but to no avail.

Ahmad Alam al-Hoda, Friday prayer leader in Mashhad and father-in-law of Ebrahim Raisi, said, “Those who don’t come to the polls are voting for the Mojahedin,” referring to the main Iranian opposition movement, the MEK.

The Associated Press reported, “Turnout appeared far lower than the last presidential election in 2017. State television offered tight shots of polling places, several of which seemed to have only a handful of voters.”

Raisi’s fixed victory will make the regime even more vulnerable, given the resounding rejection of the regime by the vast majority of the Iranian people, as they strive for a free, democratic, secular republic in Iran.