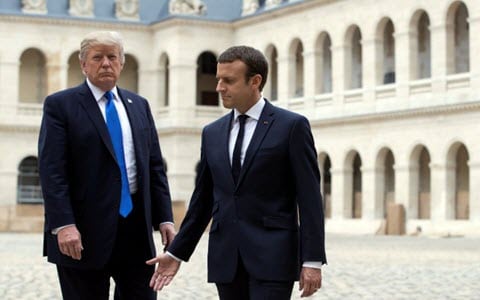 NCRI – JEDDAH: US President Donald Trump and French President Emmanuel Macron on Saturday agreed on the need to partner with allies to respond to the destabilization activities of Hezbollah and Iran in the region. Arab News reported on November 19.

The two leaders’ telephone conversation came in the aftermath of Lebanese Prime Minister Saad Hariri’s resignation, which he announced during a recent trip to Saudi Arabia.

“Both presidents agreed on the need to work with allies to counter Hizballah’s and Iran’s destabilizing activities in the region,” a statement from the White House said.

Hariri has accused Iran and Hezbollah of dominating Lebanon and attempt to covertly target his life, which prompted his resignation, and drew comparisons to the similar “atmosphere that prevailed before the assassination of martyr Rafik Al-Hariri.”

“I refer explicitly and unequivocally to Iran, which sows sedition, devastation and destruction in any place it settles in, as proven by its interferences in the internal affairs of the Arab countries, in Lebanon, Syria, Iraq, Bahrain and Yemen, driven by a deep hatred of the Arab nation and an overwhelming desire to destroy and control it,” Hariri said, when he announced his resignation on November 4.

Hariri traveled to Paris for a meeting with Macron over the weekend upon the French president’s invitation, and also to dispel allegations he was being held against his will in Saudi Arabia, and was expected to return to Lebanon for the Independence Day celebrations on Wednesday.

Saudi Foreign Ministry Adel Al-Jubeir had earlier belied accusations that Saudi Arabia was keeping the Lebanese Prime Minister against his will.

“It doesn’t hold merit as Hariri is free to go anywhere he wants,” Al-Jubeir said in a joint press conference with French Foreign Minister Jean-Yves le Drian in Riyadh.

The Saudi foreign minister also accused Hezbollah of disturbing regional peace and stability by supporting Houthi militias in Yemen, suppressing the will of the Syrian people and violating Lebanese law.

Hezbollah must learn to “respect Lebanon’s sovereignty,” he added.