Discontent of Quake Victims in Western Iran and Their Catastrophic Situation 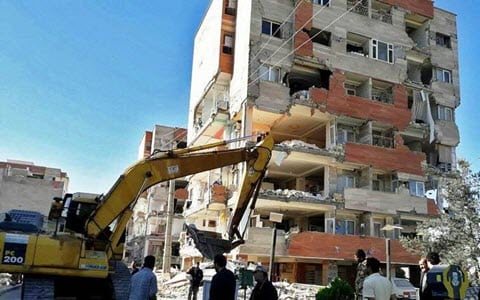 NCRI – Iranian regime’s MP: The number of dead is much higher than official statistics; in my opinion, more than 1,000 people died in the earthquake.

Days after the 7.3 magnitude earthquake in Kermanshah province, and following various reports on inaction of the Iranian regime’s authorities to address the earthquake, government media reflected a corner of the catastrophic situation of people in the quake-stricken areas.

Ahmad Safari, the representative of Kermanshah in the Iranian regime’s parliament, said in an interview with state-run ILNA news agency on Wednesday, November 15, that “some villages have not received any help.” He also said: “Here is the resurrection, and the root of the problems is the lack of crisis management.”

“It’s possible that only 10% of the villages will be tent,” said the regime’s MP, who visited the quake-stricken area on Wednesday. “There are areas where 90% of the villages are destroyed; the situation is very dire.”

Ahmad Safari also criticized the regime’s broadcasting (IRIB – Radio & Television) coverage of the earthquake, saying: “The IRIB provides coverage (of the earthquake) in a way as if everything is alright and in place. The national media with their ineffective news coverage oppressed and betrayed Kermanshah.”

He also said the number of deaths is much higher than official statistics. “The authorities do not know, I myself went to a village where they said they buried 20 people on the first day,” Safari told state-run ILNA news agency after visiting a quake-stricken area. “These people are not included in the death toll. In my opinion, more than 1,000 people were killed; seventy people were killed only in an alley in Sarpol Zahab; more than 250 people died in in the Mehr housing units.”

Qassem Jassemi, another regime’s representative in the parliament, also said: “Drinking water, food and basic and general supplies have not yet reached the (quake-stricken) families.”

He added that relief efforts are very slow and people are faced with the problem of shelter and housing and have spent the last three nights outside in the cold.

According to the regime’s MP, the electricity and water problems are also present in the quake-stricken areas.

The state-run Sharq daily wrote on November 15: “72 hours after the devastating earthquake in Kermanshah, people are still stunned by the helpless relief efforts; many still continue to spend the night out without a tent.”

This government media added: “People are complaining about the way help is provided, and many have not yet received a tent. Almost all people sleep in the street. 700 households in the village of Kani are in a very bad condition without even one relief worker.”

“We cried from the very first day of the incident (earthquake) to bring us only tents and blankets so that our women and children do not die from the cold, but no one listened to us. The villagers endure all the hardships, but the cold hangs everyone, especially the kids and the elderly. We survived the earthquake and we hope not to die from cold,” the state-run Javan newspaper wrote quoting a quake survivor.

The state media added: “Two days after the deadly earthquake, there is still no news of relief and assistance to the villagers. The villagers, who do not have any shelter, spend the night in the cold under zero degrees outside, without tents and blankets and heating equipment.”