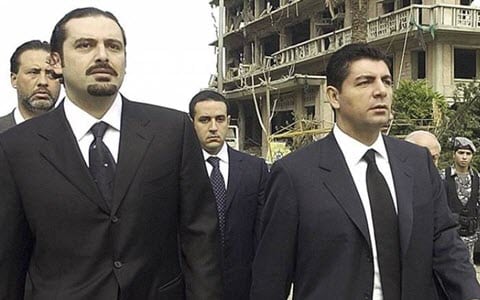 NCRI – The older brother of recently resigned Lebanese Prime Minister Sa’ad Hariri voiced his support for his brother’s decision in light of the actions of both the Iranian Regime and their proxy terror group Hezbollah.

Bahaa Hariri gave a statement to the AP, on Wednesday, which criticised the Iranian Regime, accused Hezbollah of attempting to seize control of Lebanon, and expressed gratitude towards Saudi Arabia for its support of Lebanon and its legitimate government.

He said: “I support my Brother Sa’ad’s decision to resign as prime minister of Lebanon in the face of the growing demands and actions of Hezbollah, Iran’s surrogate party, in Lebanon.”

Bahaa has been tipped by the Lebanese press as a possible Saudi-backed replacement for Sa’ad, who made a shock resignation speech from Riyadh on November 4.

This statement fuels speculation that he may fill the post but Bahaa, who works in real estate and investment, declined to comment on that.

In his statement Bahaa, 51, said that his family stood for the principles that make Lebanon unique; multiculturalism, religious freedom, and political freedom. The opposite of Iran and Hezbollah.

He continued: “Only a pernicious outside actor, such as Iran and its surrogate, Hezbollah, can upset the balance as this group now seeks to take control of Lebanon.”

Sa’ad resigned his post, heading a year-old coalition government that included Hezbollah, citing meddling by the Iranian Regime and Hezbollah. This includes fears that he may be assassinated by Hezbollah under Iran’s instructions in the same manner that his father, former Prime Minister Rafik Hariri, was murdered in February 2005 in a Beirut bombing.

The Lebanese president, Michel Aoun, has refused to formally accept Sa’ad’s resignation until he returns to Lebanon to explain his decision in person which Sa’ad said he would do very soon.

The Lebanese media has reported that Saudi Arabia decided to replace Sa’ad with his older brother, over fears that he had been too soft on the terrorist group Hezbollah, and was holding him captive in Ridyah.

Hariri has expressed denied this and, in fact, travelled to the UAE since resigning. His office noted that these reports were lies perpetrated by the Iranian Regime in an attempt to undermine Saudi Arabia.

He said: “We are not a herd of sheep or a piece of property whose ownership can be handed over from one person to the other.”