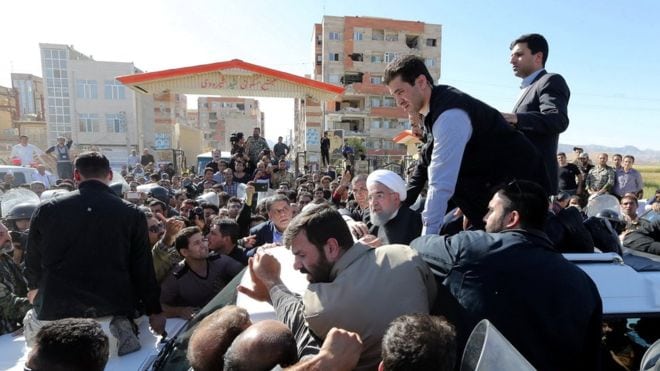 Iranians living outdoors in bitterly cold temperatures after an earthquake are making desperate pleas for help.

About 540 people were killed and close to 8,000 injured when the quake hit near the Iran-Iraq border on Sunday.

The government is scrambling to get aid to the worst-hit Kermanshah province, where hundreds of homes were destroyed.

Night-time temperatures in Kermanshah province fell close to freezing for the second night in succession.

Ali Gulani, 42, lives in the province’s badly-hit town of Qasr-e-Shirin, and told BBC Persian people were burning crates to try to stay warm.

“We are living in a tent and we don’t have enough food or water,” he said. “You can hear children crying, it’s too cold. They are holding on to their parents to warm themselves – it’s pretty bad.”

Mr Gulani said there were an average of three strong aftershocks an hour, provoking panic.

Close to 200 aftershocks have hit the region since the magnitude-7.3 earthquake on Sunday night. It was one of the strongest on earth this year, as well as the deadliest.

Mr Gulani said he understood aid had been despatched within the province, but that people in his town had not yet received help. Instead, people were having to trek to the other side of town to get water from a tank.

Iranian state TV said thousands of survivors had spent another night in makeshift camps or in the open.

“It is a very cold night… we need help. We need everything. The authorities should speed up their help,” one homeless young woman in Sarpol-e-Zahab, where most of the victims died, told Reuters news agency.

One aid agency said 70,000 people needed shelter and the UN said it was “ready to assist if required”.

While visiting the region on Tuesday, a national day of mourning, President Hassan Rouhani pointed out that many privately-built homes appeared to have been spared damage.

In Sarpol-e Zahab, he asked: “Who is to be blamed for this? Our engineers?” He said the government would hold accountable anyone found not to have upheld building standards.

Iranian state news agency Irna said 530 people had died in Iran alone. In the more sparsely populated areas across the border in Iraq, 10 people died and several hundred were injured.

Mansoureh Bagheri, an Iran-based official with the Red Crescent Society, told the BBC about 12,000 residential buildings had “totally collapsed”.

She said now that rescue operations had ended, the priority was getting people into shelters as quickly as possible, and that the delivery of aid was on track.

“Newly constructed buildings… held up well, but the old houses built with earth were totally destroyed,” he told state TV while visiting the affected region.

The Iranian Red Crescent said many areas lacked water and electricity and that aid supplies were being hampered by roads blocked by landslides. Iranian army helicopters are taking part in the relief effort.

About 30 Red Crescent teams are working in the earthquake zone, Irna reported.

The earthquake struck at 21:18 local time (18:18 GMT) on Sunday, about 30km (19 miles) south of Darbandikhan in Iraq, near the north-eastern border with Iran.

Tremors were felt as far away as Turkey, Israel and Kuwait.