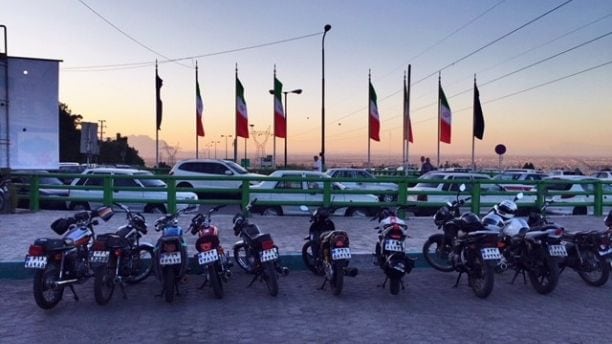 As fierce protests continued across Iran for the sixth consecutive night Tuesday, among the thousands taking to the streets were those who widely appreciate words of support from President Donald Trump – and hope for more substantial support.

“Here is real hell,” a 31-year-old protest leader in Tehran, who Fox News will identify only as Azi, said in a telephone interview during the early hours of Wednesday morning. “This is a real revolution against the mullahs. Iran is uprising. I thank Mr. Trump for his support, but we need more.”

Protestors in Tehran, Iran come up against police as the uprising enters its seventh day.

President Trump has taken to Twitter several times to note the protests in Iran, and on Wednesday morning hinted the U.S. could become more involved – in due time.

“Such respect for the people of Iran as they try to take back their corrupt government. You will see great support from the United States at the appropriate time!”

While the protests – a jolting, collective response to Iran’s receding economy, flagrant corruption and the escalating cost of fuel and goods – sprung up unexpectedly, the turmoil had been brewing for some time. According to one U.S-based intelligence source, the possibility of large-scale demonstrations – or “riots” as described by Iran’s state-owned media – have been on the table for the last two years.

The seeds of protest were sown months after sanctions were lifted by the Obama administration as part of the 2015 Joint Comprehensive Plan of Action (JCPOA) – commonly called “the Iran deal” – when many felt that they had not benefitted from the fiscal boost. Younger Iranians in particular people banded together as advocates for change, largely through social media and apps such as Instagram and Telegram.

Iranian authorities have responded by shutting down social media access, making it more difficult for protesters to organize, but making demonstrators more creative in their quests to circumvent the ban.

“Obama betrayed the Iranian people. He gave the mullahs are ransom and cooperated with (Supreme Leader) Khamenei, he betrayed the Syrian people too. But Trump did not. So we have real expectations,” said Azi. “We want sanctions against the Iranian regime. They plundered our money. The U.S should not pay the mullahs.”

Protestors in Tehran, Iran come up against police as the uprising enters its seventh day.

Azi said he doesn’t know the fate of friends who have been arrested in the ongoing demonstrations. But he assured they are prepared to fight until the bitter end.

“This time, even if we die, we will not stop. This is the price of freedom. We are not afraid,” he vowed. “I am a freedom fighter. Maybe tonight I will be killed.”

Others Iranians who spoke to Fox News agreed their objective is simple: No more rule by the country’s mullahs.

“The issue is not just economic, it is political. People will give many reasons for protesting, and all the reasons have led to us losing patience,” said Nik, a 27-year-old engineering student in Tehran.

“All the money given in the Iran deal went to expand security forces in Syria and Lebanon, all the people know this. We will continue until we overthrow this regime. We thank Mr. Trump for support, but we need all the countries not to remain silent.”

Others on the ground in Iran told Fox News most of the protest participants are “young people” – many students of universities, along with a number of high schoolers and supporters of the MEK opposition group.

Another protester, a 23-year-old communications student named Haroon, concurred the bulk of protesters were fellow students “fed up” with their dim prospects.

“Students and ordinary people are being killed and wounded police,” he insisted. “Because we tear down posters of the tyrannical leaders and we burn them. We only want happiness. We want help from the Americans to end this regime.”

According to data obtained by Sc2 Corp, which provides unique “social insight” data to the U.S Special Operations community, the Trump tweets – along with the support by UN ambassador Nikki Haley – generated an instant spike in positive references from Iran, triggering comments from “Viva Iran, Viva USA, Viva Trump” to “proud of you president trump that strongly support the people.”

At least 21 Iranians have been reported killed in the protests, with hundreds more arrested.

Meanwhile, on Tuesday night counter-protesters took to the streets, marching “in solidarity” with the country’s leadership.

Haroon said anti-government protests were growing “day by day,” despite the effort by authorities to shut them down. Nik said that overnight Tuesday, security forces had buses in place to “brutally” sweep up as many protesters as possible.

“We are looking for any opportunity, some threw trash in the streets or chanted,” he said. “And there are many women with us too. They have a special role in this. They want equal rights. Tonight we will go to the streets again.”

As the protests have grown in intensity, so too have the acts of violence.

“The agitation has reportedly become more violent with protesters attacking security forces and the government seems to be gradually increasing the use of force to quell the unrest,” noted Kamran Bokhari, a Senior Analyst with the intelligence firm, Geopolitical Futures and with the Center for Global Policy.

There is considerable debate over just how involved the U.S. should become in the Iranian demonstrations.

“U.S. involvement will likely work to the advantage of the regime, which is trying to show that the unrest is American-sponsored in an effort to delegitimize the opposition,” Bokhari speculated.

TRUMP SAYS IRANIAN PROTESTS WILL SEE SUPPORT FROM U.S. ‘AT THE APPROPRIATE TIME’

Others disagreed, and support a different strategy.

“President Trump needs to get behind this situation, just as we did with various regime changes in the fall of the Soviet Union,” contended James Waurishuk, a retired U.S. Air Force colonel and former Trump campaign advisor. “The U.S. needs to bolster its strategic influence and public diplomacy efforts.”

“Free high-speed internet would be a great first step,” he said.

On a recent trip to Iran by Fox News, the cracks of disappointment were clearly evident. Cab drivers and restaurant waiters routinely went out of their way to explain they had multiple college degrees, yet were drastically underemployed.

Iranians routinely gather on (and under) the famed bridges of Esfahan do social gatherings.  (Fox News/Hollie McKay )

Instead, students gathered under bridges late at night to drink black market alcohol, where women wore the mandatory hijab as loosely as possible.

“We had hope in Rouhani, much more than Ahmadinejad,” one waiter whispered, referring to their current president who took the reins in 2013 with the promise of lifting sanctions and improving the economy. “But our lives are no better yet.”

Hollie McKay has been a FoxNews.com staff reporter since 2007. She has reported extensively from the Middle East on the rise and fall of terrorist groups such as ISIS in Iraq. Follow her on twitter at @holliesmckay