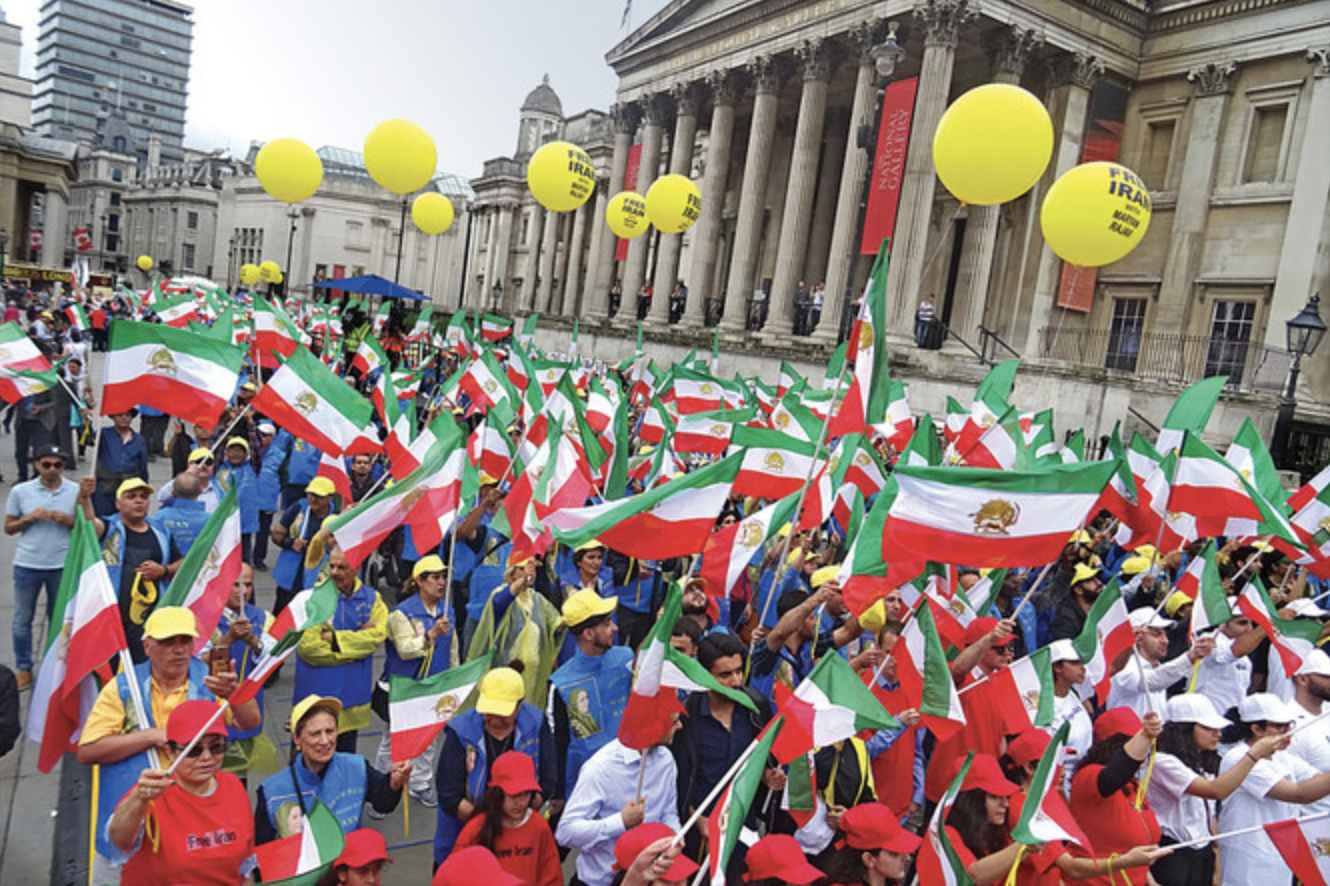 LONDON: Thousands of exiled Iranian dissidents rallied in Trafalgar Square in London on Saturday to demand regime change in Tehran, urging new UK Prime Minister Boris Johnson to get behind their campaign. The event organized by the National Council of Resistance of Iran came amid tension between London and Tehran over the seizure of a British oil tanker in the Strait of Hormuz.

As the rally took place in the British capital, Iran snubbed a diplomatic initiative by Oman to mediate in the tanker dispute, and tried to shift the blame for the stand-off onto other regional countries.
In further evidence that tough US sanctions are crippling the Iranian economy, new figures showed that China’s crude oil imports from Iran sank by almost 60 percent in June compared with a year earlier.
The rally in London was one of a series of protests being held across Europe and in Washington, DC. The Iranian government was one of the most dangerous in the world, operating in one of the most concerning areas, former Conservative MP Brian Binley told Arab News.

“I promise I will do my best to arrange a meeting with Boris Johnson, in conjunction with my colleagues, and attempt to get a better reaction to the Iranian situation than we’ve had from previous governments,” he said.
Speaking via video message, opposition leader Maryam Rajavi said “I speciﬁcally urge the new UK government to support human rights, namely the suppressed human rights of the people of Iran. I urge them to take action to send an international fact-finding mission to Tehran to visit the regime’s prisons and the political prisoners, particularly the women.”
Dr. Matthew Offord, prominent Conservative MP for Hendon said “the interest of the international community converges today with the democratic aspirations of the Iranian people, which simplifies in an Iran without the absolute rule of the theocracy.”

With regards to Iranian regime’s recent wreaking havoc in the region, Dowlat Nowrouzi, the UK Representative of the National Council of Resistance of Iran said: “These developments reaffirm the veracity of the Iranian Resistance’s assessment that so long as this regime is in power, belligerence, terrorism and crisis — as its real nature — will continue in the region.Volume 90%

“Recent aggressions of the Iranian regime, world’s leading terrorist state, in international waters require a firm UK and global response. Inaction will only embolden the regime to continue its terrorism, sabotage and warmongering across the world,” she added.
The Stena Impero, a British-flagged oil tanker, was seized by Iran’s Revolutionary Guard Corps (IRGC) as it was passing through the Strait of Hormuz on July 19.

According to an intelligence brief issued by the NCRI and the People’s Mujahedin of Iran (PMOI), the capture of the tanker was ordered by Iranian president Ali Khamenei, who said that Tehran would retaliate for the seizure of an Iranian oil tanker near Gibraltar by royal marines earlier this month.

According to the PMOI, Khamenei directed the IRGC’s commander, Maj. Gen. Hossein Salami, to attack and capture a
the British tanker, under the supervision of Brig. Ali Fadavi, the deputy commander in chief of the IRGC and carried out by Brig. Alireza Tangsiri, commander of the IRGC navy.

Meanwhile, Roger Lyons, former TUC president raised the issue of Nazanin Zaghari-Ratcliffe, a dual British-Iranian citizen that has been detained in Iran since 2016 and said the UK would not abandon her cause, again pressuring Johnson to do more to secure her release.
On the other hand, Lyons told Arab News that Labour leader “Jeremy Corbyn has been on the payroll of Iran’s Press TV for far too long and he has been taking the side of the ayatollahs, rather than the Iranian people.”
Struan Stevenson, coordinator of the Campaign for Iran Change, said: “We want regime change, we want to get rid of this evil regime. We’re here underneath the statue of Admiral Nelson. What would Nelson make of a British ship being seized by pirates? He would be turning in his grave.
“So our message today to Boris Johnson is to be tough on this regime as they are spreading terrorism and war across the Middle East and the world.”
Meanwhile Tehran rejected an attempt at mediation by Omani Foreign Minister Yusuf bin Alawi in the dispute over Iran’s illegal seizure of the British tanker.

“Some of the region’s countries have not only removed the possibility of talks because of hasty and arrogant moves and behavior, but have also made managing regional crises a serious challenge,” Rear Admiral Ali Shamkhani, secretary of Iran’s Supreme National Security Council, told the Omani diplomat. Shamkhani also criticized a British plan for a European coalition to escort tankers in the Gulf.

“Security measures for the region must use local capabilities and cooperation between regional countries, and foreign countries’ interference will achieve nothing but increase problems,” he said.