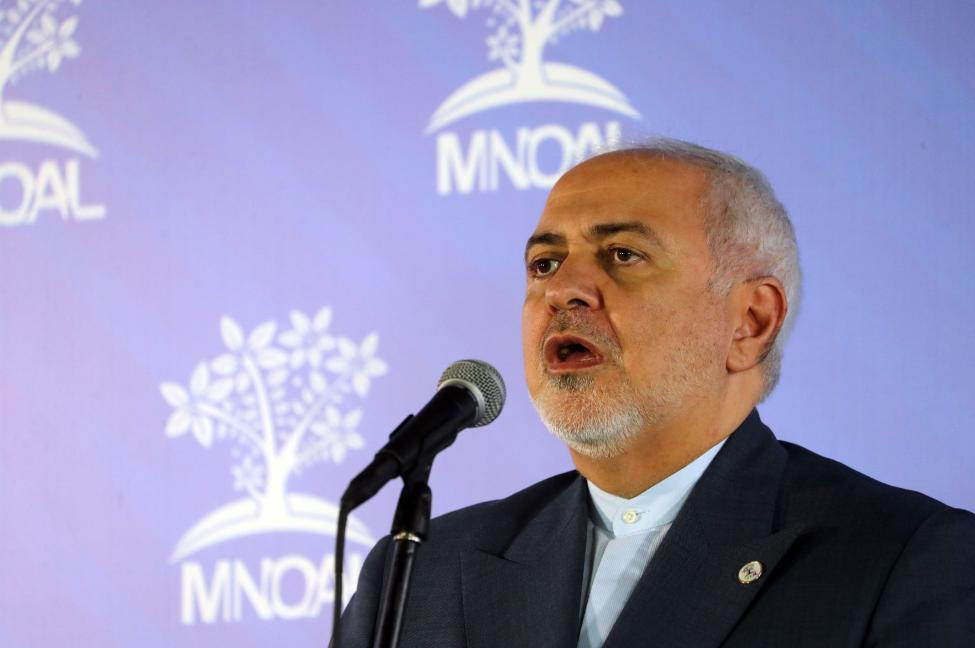 Aug. 7 (UPI) — With his neatly trimmed beard, wide smile and receding white hair (never covered by a turban), Mohammad Javad Zarif, Iran’s foreign minister, is widely viewed in the Western media as the moderate face of his regime. The reality is somewhat different.

Born in 1960, Zarif’s deeply religious, middle-class family denied him access to television and newspapers, sending him to be educated at a private religious institution and encouraging him to read books on revolutionary ideology. He then spent several years in America gaining degrees and a Ph.D in international relations, before assuming a diplomatic role in the newly created Iranian theocratic regime following the ousting of the shah in the 1979 revolution.

In that role, he led the Iranian team who negotiated the Joint Comprehensive Plan of Action nuclear deal with the five permanent members of the U.N. Security Council and the European Union. It was a deeply flawed exercise in appeasement engineered by the Obama administration. It removed sanctions from the Iranian regime and allowed it to access $150 billion of frozen assets, which it quickly used to bolster its international terror campaign and to fund proxy wars in the Middle East.

Zarif resigned as foreign minister in February, angered at his exclusion from a meeting between President Hassan Rouhani, terrorist Quds Force Commander Gen. Qassem Soleimani and the Syrian dictator Bashar al-Assad. However, Rouhani and Iran’s supreme leader Ali Khamenei refused to accept his resignation and he has remained in post. Last week, U.S. Secretary of State Mike Pompeo announced that Zarif had been added to America’s list of sanctions against the regime, calling him “a propaganda minister rather than a foreign minister” and stating that: “This is a leader who has supported a regime that jails political dissidents, treats women horribly. They go after peaceful worshipers. He’s the mouthpiece of that autocracy. And they suppress free speech.”

Pompeo is outraged that Zarif, like the Nazi’s Joseph Goebbels in the 1930s, journeys around the world attempting to justify the Iranian regime’s criminal behavior, such as the illegal seizure of the British-flagged Stena Impero oil tanker in the Strait of Hormuz, the sabotaging of six other oil tankers in the Gulf and the shooting down of an American drone in international airspace. Zarif is also the apologist for the way his regime supplies missiles for its Houthi rebel proxies in Yemen to fire into Saudi Arabia and its supply of weapons and personnel to prop up Assad’s bloody civil war in Syria, the terrorist Hezbollah in Lebanon, the brutal Shi’ia militias in Iraq and Hamas in Palestine.

As foreign minister to a regime described by Pompeo as the godfathers of terror, Zarif was the ultimate boss of the diplomat from the Iranian embassy in Vienna, who has been charged with handing over explosives to three Iranian agents with instructions to bomb an opposition rally in Paris in June 2018, a potential atrocity that French President Emmanuel Macron tried to hide from the public. Zarif was also in charge of the ambassador and first secretary from the Iranian embassy in Albania, both of whom were expelled from that country last December on similar charges.

Zarif, of course, denies all suggestions that Iran is pursuing a policy of aggressive expansion in the Middle East. In response to accusations of piracy over the seizure of the British oil tanker, Zarif protested: “The Persian Gulf is our lifeline … We will respect international navigation, for us, freedom of navigation in the Persian Gulf is a must.” Portraying Iran as a peaceful nation and America as the great aggressor, Zarif has mastered the art of doubletalk and deceit. When quizzed on TV about the jailing of a human rights activist, he responded: “We do not jail people for their opinions.” In a country that executes people for their opinions, perhaps for once he was speaking the truth.

While Zarif smiles for the cameras in the West, back home his government has executed more than 3,500 people, including women and children, since he took office in 2013. Inside Iran, the torturers and executioners are busier than ever, determined to crush all opposition under a tidal wave of fear and oppression. But Zarif is no stranger to crimes against humanity. He was active as a senior career diplomat in the United Nations in 1988 while his government butchered over 30,000 political prisoners, members and supporters of the Mojahedin e-Khalq/People’s Mojahedin of Iran (MEK/PMOI), the main democratic opposition movement in Iran. In 1989, shortly after this horrendous crime against humanity, Zarif was appointed as Iran’s ambassador to the United Nations.

In September 2017, U.S. President Donald Trump told the United Nations that “the Iranian government masks a corrupt dictatorship behind the false guise of a democracy. It has turned a wealthy country with a rich history and culture into an economically depleted rogue state whose chief exports are violence, bloodshed, and chaos.”RELATED Iran: Foreign tanker in Gulf seized, sailors detained

Zarif responded with an angry tweet: “Trump’s ignorant hate speech belongs in medieval times — not the 21st century U.N. — unworthy of a reply.” As foreign minister for a fundamentalist regime that flogs, immolates, amputates limbs, gouges out eyes and hangs people in public, Zarif certainly has firsthand knowledge of medieval times.

The blacklisting of Zarif by the United States is a measured and justifiable response to his campaign of misinformation and duplicity on behalf of one of the most corrupt, evil and dangerous regimes in the world. The EU should abandon its policy of appeasement toward the fascist Iranian regime and follow America’s lead.