Iranian Dissidents Rally in D.C., Call on Trump to ‘Rip Up’ Nuclear Deal 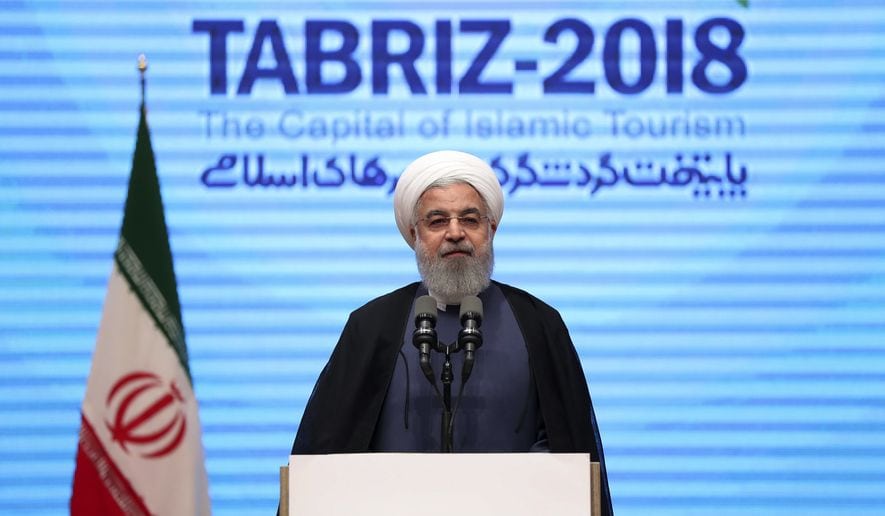 Thousands of supporters of Iranian opposition groups rallied just blocks from the White House on Saturday for the downfall of Tehran’s theocratic government and to invite President Trump to “rip up” the Iran nuclear deal.

The rally came one week before Mr. Trump’s May 12 deadline to decide whether to pull out of the Obama-era Iranian nuclear deal that saw the U.S., Britain, France, Germany, Russia and China ease sanctions on Tehran in exchange for limits to its nuclear program. Mr. Trump has criticized the 2015 accord since it took effect.

“What do you think is going to happen to that nuclear agreement?” former New York City Mayor Rudolph Giuliani yelled to a packed conference hall at the Grand Hyatt Hotel.

A longtime ally of Iranian dissidents, Mr. Giuliani just joined Mr. Trump’s personal legal team. Holding a piece of paper in his hands, he drove the rally wild by pretending to rip it apart.

“We do not want President Trump to renegotiate, we want him to rip it up,” said Shirin Nariman, a spokeswoman for the Organization of Iranian American Communities (OIAC) and an event organizer.

Saturday’s rally saw organizers gather more than 1,000 Iranian delegates from across the U.S. for a rowdy flag ceremony, fiery speeches and music. In addition to criticizing the nuclear deal, dissidents blasted the Islamic Republic’s human rights record, and argued for a free, democratic and secular Iran.

Several speakers zeroed-in current unrest across Iran. Protests are still underway after a major uprising that erupted in 142 cities across in January, the largest since 2009.

Some analysts believe the demonstrations began as an attempt by hard-line conservatives in the regime to undercut President Hassan Rouhani, a relatively moderate cleric who strongly backed the nuclear deal and just won a second four-year term.

Mr. Rouhani has claimed that one of the exiled opposition groups involved in organizing Saturday’s rally — the Mujahedeen-e-Khalq (MEK) — was inciting the violence.

The MEK has close ties to a Paris-based organization, the National Council of Resistance (NCRI) of Iran. The NCRI holds an annual rally in France that draws tens of thousands to call for the downfall of Iran’s mullah-led government and has deep sources in Iran.

The group is credited with exposing secretive Iranian nuclear facilities in the early 2000s. It also has had a contentious relationship with Washington, and was listed it as a terrorist organization by the State Department until 2012.

Many prominent U.S. politicians from both sides of the aisle, including Mr. Giuliani, have long spoken out in support of the NCRI and the MEK, claiming the latter was wrongly put on the terror list.

Mrs. Rajavi, who also called for the end of the Iranian death penalty, which has been liberally used as a scare tactic to subdue protests, also voiced opposition to the nuclear deal. She urged the international community to abandon the agreement and instead conduct unconditional inspections of Iran’s nuclear weapons and ballistic missiles program.

“The regime is on the ropes as they say with boxers,” he said. “The debate is no longer the hard liners against the reformers. It is now the entire people against the regime.”

Mr. Richardson also praised OIAC, MEK and NCRI as “leadership that is willing to sacrifice and take risks.”

When Mr. Giuliani noted that Mr. Trump backed the Iranian protests earlier this year with the words “we support their fight for freedom,” the crowd erupted.

Ms. Nariman expressed hope that this group, in addition to Mr. Giuliani and Mr. Trump, would soon bring about change.