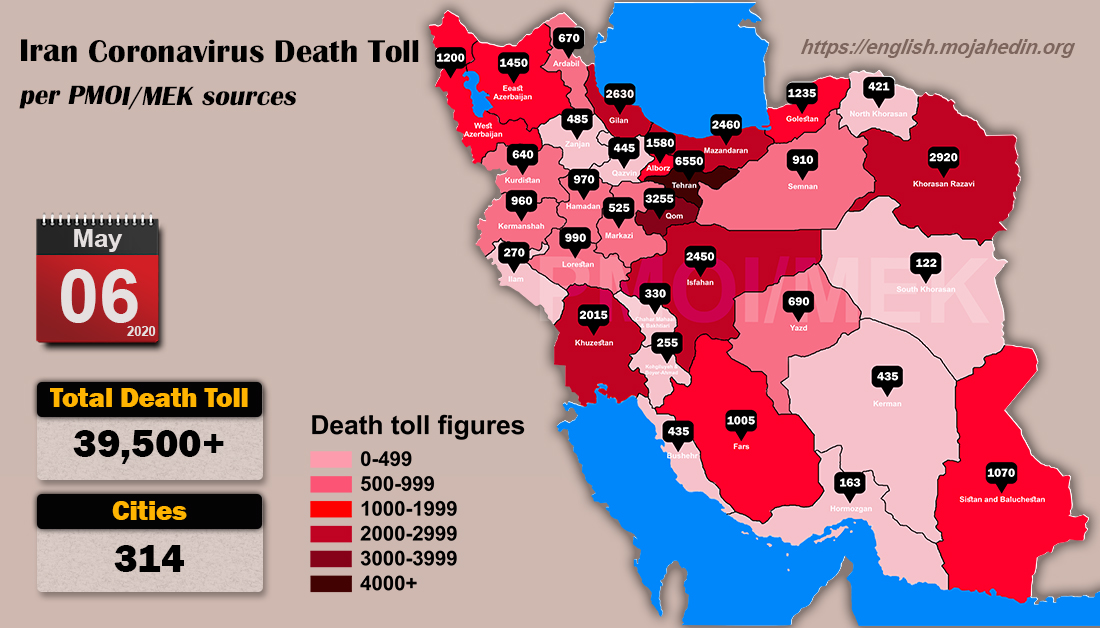 By Secretariat of the National Council of Resistance of Iran (NCRI)

By forcing people back to work, the number of people contracting the Coronavirus has accelerated across the country and the spokesman for Rouhani’s Health ministry was forced to admit it. Today, he announced the number of new patients in the last 24 hours as 1,680, which is more than double the number on May 4, which was 802, and its consequences will appear in the coming weeks.

Meanwhile, last night, the state-run TV broadcast Rouhani’s meeting with Health Ministry’s officials on May 4, during which he tried to justify the regime’s fake statistics. “There are people who are not aware of their infections; neither is any hospital, nor any toll centers. So we have to accept that number of patients in all countries around the globe may be more than what their statistics say … the same goes for the death toll … When a person (infected with Coronavirus) with an underlying disease dies, should we mention that underlying disease as the cause of death, or should we consider Coronavirus as the cause? … We can do both ways, and countries do the same.”

Saeid Namaki, regime’s Health Minister, addressing the same meeting, said, “We expected the virus would be contained as the weather gets warmer, but now our tropical provinces, like Khuzestan, Hormozgan, or Bushehr, are taking on an upward trend.”

Farhad Abol-Nejadian, president of Khuzestan University of Medical Sciences, told the state- TV’s news network, “Due to the decrease in social distancing since April 11, 2020, we have an increasing trend starting from April 20, 2020. The highest rate of infection is in Ahvaz, Bavi, Dezful, Shooshtar, and Karun… The major concentration of the outbreak is in the suburbs of the cities, where there is more economical and living restraint.”

Today, Seyed Mahmood Alavi, a deputy from the same university, told the state-run daily, Resalat, “We have Coronavirus infection in all of Khuzestan cities, particularly in Ahvaz and surrounding towns. After an infected Ahvazi patient traveled to Ramshir, the virus outbreak was explosive there.”

In Tehran, today, Alireza Zali, head of the National Coronavirus Combat Taskforce (NCCT) in Tehran, told the state-official news agency, IRNA, “There has been no change in the situation, and Tehran is considered a contaminated city and many social sectors are infected with the COVID_19 virus.”

In Mazandaran, yesterday, Seyed Abbas Mousavi, the president of the University of Medical Sciences, who was quoted by the IRGC affiliated news agency, Fars, said, “None of the cities in Mazandaran are in a white (low risk) situation” (Revolutionary Guards News Agency, May 6).

In Shahroud, the president of the University of Medical Sciences told the state-official news agency, Mehr, that Miami, which is on the list of white (virus-free) cities, ” not only is not white but is still in the red condition.”

In Zahedan, the deputy of the University of Medical Sciences told the state-run news agency, Borna, “Due to the increase in the number of patients in the province in the last two weeks, it seems that we are in the second wave of COVID-19 outbreak.”

Today, the state-run daily, Jahan-e Sanat wrote, “Experts and specialists inside and outside the government believe that the President (Rouhani) is optimistic about how the Coronavirus is behaving … This cover-up has resulted in, people considering the epicenters of the outbreak as white and low-risk zones, and not taking the disease seriously.”