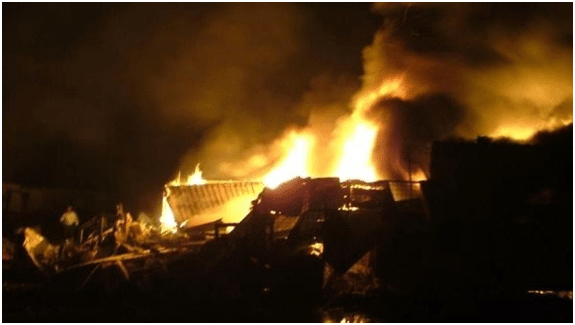 At least 22 people died and dozens more were hurt when a rocket attack hit a camp of Iranian exiles near Baghdad International Airport Thursday, according to a spokesman for the National Council of Resistance of Iran.

According to some accounts from the Camp, as many as 80 missiles were fired at Camp Liberty, creating holes as deep as seven feet and as wide as 12 feet.

The rockets hit Camp Liberty, a former U.S. base now housing the group known as the Mujahedeen-e-Khalq, according to a police official. This is the fourth attack on the camp since 2013. Some 2,400 members of the opposition live there.

Some of the missiles used are Falaq missiles produced by the Iranian regime, according to NCRI Deputy Director Alireza Jafarzadeh. “The Iraqi Government and the United Nations, which signed a memorandum of understanding in December 2011, guaranteeing the protection of the residents of Camp Liberty, must be held to account,” said opposition spokesman Shahin Gobadi.

Last year, the Islamic State group was said to have fired rockets near to Baghdad International Airport as it attempted to destabilize the capital.

The police official said the rockets landed far enough from the airport that they did not disrupt commercial traffic. He spoke on condition of anonymity because he is not authorized to speak to the media.