Daily Protests Continue Across Iran by All Walks of Life 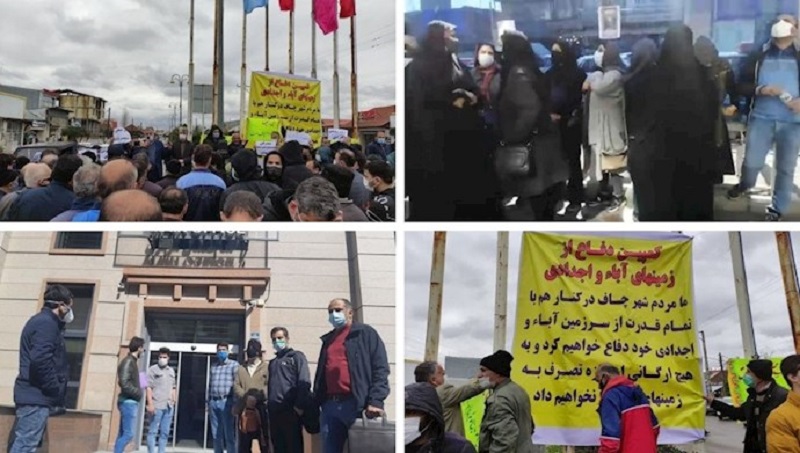 Despite the Iranian regime’s oppressive measures and the coronavirus outbreak, protests continue across Iran from all walks of life, according to a report tallied by the People’s Mojahedin Organization of Iran (PMOI/MEK). These protests show how explosive Iranian society has become.

Retirees chanted: “The result of the government’s work is plundering the people’s wealth,” “Housing and livelihoods are our inalienable rights,” “Our country sits on treasures, but we are living in suffering,” and “Our salaries are paid in rials, our expenses are in dollars.”

Pensioners have been holding these protests in the last few years due to Iran’s worsening economic situation, which is a byproduct of the regime’s corruption and economic mismanagement. Retirees have been protesting low wages and the regime’s refusal to adjust their pensions based on the national currency’s devaluation and the rising inflation rate. Retirees receive an average salary of 25 million rials per month, while the poverty line in some parts of Iran has reached 100 million rials in the past year.

In southwest Iran, workers of Ahvaz Municipality held a protest in front of the city council building on Tuesday demanding their rights and delayed wages.

On Tuesday, a group of street peddlers and locals in Tabriz, northwest Iran, held a protest when security forces took their belongings and prevented them from working in front of the Molavi market. Protesters marched towards the governorate. Security forces attacked protesters and arrested several peddlers.

On Tuesday, locals of Chaf and Chamkhaleh in Gilan province, north of Iran, protested the occupation of their ancestral lands by the Housing and Urban Development Foundation and the Revolutionary Guards (IRGC).

On Tuesday, contract employees of the Ministry of Oil held a protest in front of the regime’s parliament to protest the recognition of discrimination between them and the regime’s official employees.

According to the protesters, while the Ministry of Oil’s official employees receives a salary of at least 15 million Tomans, temporary employees of the same class receive only about 4 million Tomans per month.

Karaj Railway workers went on strike on Tuesday following a previous call. They said they had gone on strike to protest not receiving their insurance rights for months.

Workers of the Mahshahr Petroleum Products Distribution Company gathered in front of the Mahshahr governor’s office in southwest Iran on Monday morning, demanding their delayed wages and rights and implementing job classification.

On Monday, workers at the Nurabad-Arak railway in central Iran went on strike for not receiving their wages and benefits.

With the growing protests across Iran, the state-run media warn rival factions of another uprising and underline the role of the opposition People’s Mojahedin (PMOI or MEK) in guiding the society toward regime change.

“Don’t the [rival faction] see that the poverty line of 10 million tomans has erased the middle class and placed it next to the deprived and poor class?  In fact, the rule of extreme dissatisfaction has spread to tens of millions. Dissatisfaction, according to security officials, can erupt at any moment in the form of explosive excitement and dangerous [protests],” wrote the state-run Mardom Salari daily on Monday.

“Why don’t they see that in the context of the livelihood crisis, a dangerous and sinister organization is taking root under the skin of the city? Do they not know that the MEK in its networks incites the poor youth to take radical actions against the entire system? When the waves of the discontent move and quickly turn out of expectation into a violent storm, there will be no sign [of the regime],” Mardom Salari’s article concluded, warning the rival factions.

Iran State-Run Media Warn Officials of Another Social Turmoil
Comment
US - Iran Relations: Will There Be A New Policy Against Tehran's Dirty War?