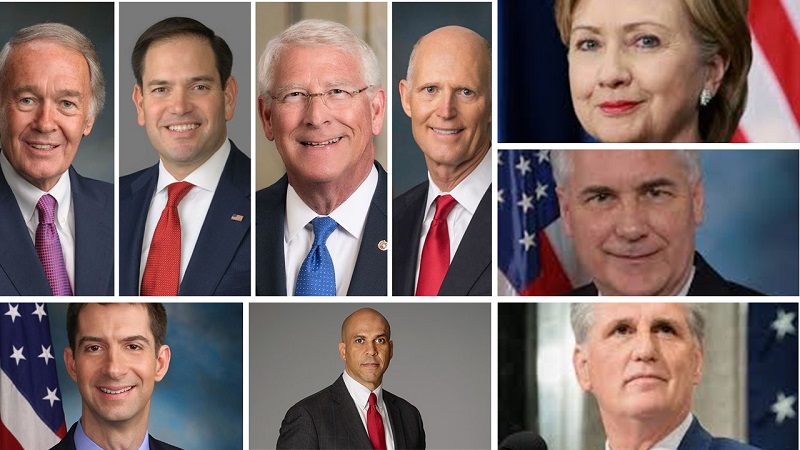 The international community continues to send messages of solidarity with the Iran protests and speak out against the brutal crackdown on protesters by Iran’s regime.

Rep. Kevin McCarthy, the Republican leader in the U.S. House of Representatives, said: “This week, Iranians stood up to an oppressive government and sent a resounding message heard around the world that there is no substitute for liberty.”

“To the people of Iran: the United States has heard you and stands with you.”

Former U.S. Secretary of State and Senator Hillary Clinton said: “The reports of crackdowns on protesters, overflowing hospitals, and internet blackouts in Iran are very disturbing. The situation calls for investigations and accountability.”

“As the regime in Tehran violently cracks down on growing protests throughout the country, the Trump Administration is right to lead the free world in holding Iranian officials responsible for the regime’s widescale repression,” said Rubio, a Republican member of the Senate Foreign Relations Committee and the Senate Select Committee on Intelligence.

“The Iranian people deserve better as they continue to suffer under the regime’s criminal corruption, massive economic mismanagement, and systemic human rights abuses, in addition to its support for terrorists, the murderous Assad regime, ballistic missile aggression, nuclear proliferation, and regional aggression.”

U.S. Senator Cory Booker, a Democratic Presidential hopeful, said: “Iran’s use of deadly force against peaceful protesters and censorship is unacceptable. Iran’s government must end this violence now and work to address the needs of its people.”

Rep. Tom McClintock, a Republican Member of the House of Representatives, said: “The brutal and murderous crackdown by the illegitimate Iranian regime is a reminder of vital importance of the Free Iran movement. I continue to stand with the people of Iran as they bravely stand against tyranny.”

Senator Roger Wicker, Chair of the Senate Committee on Commerce, Science, and Transportation, said: “The reports of lethal force being used against protesters in Iran are appalling. Tehran should know that no amount of censorship or oppression will hide the full extent of their brutality.”

Republican Senator Tom Cotton said: “The Iranian people are tired of the regime ignoring their basic needs while funneling vast sums to terrorists throughout the Middle East. We must stand with the brave protestors demanding accountability from the ayatollahs.”

Republican Senator Rick Scott said: “Incredible bravery shown by the people of Iran standing up against their oppressive regime.”

“The US is watching and hears you! As a freedom-loving country we stand with those fighting for freedom and democracy around the world!”

Democratic Senator Edward J. Markey said: “The Iranian government must restore internet access to the people, and the Revolutionary Guards must refrain from further threats against protestors.”

Senator Bob Menendez, the Ranking Member of the Senate Foreign Relations Committee, said: “As people peacefully assemble across the Middle East, this weekend in Iran, governments must respect the rights of their citizens to protest and express themselves.”

As people peacefully assemble across the Middle East, this weekend in Iran, governments must respect the rights of their citizens to protest and express themselves. https://t.co/cPAHc4BBKL

Rep. Eliot Engel, Chairman of the House Foreign Affairs Committee, said: I condemn the Iranian regime’s use of violence against protestors and internet shutoff. Iranians must be allowed to peacefully protest and freely communicate.

Rep. Michael McCaul, Ranking Member of the U.S. House Committee on Foreign Affairs, said: “The right of the Iranian people to assemble must be respected. The Iranian regime must end its violence against its citizens & restore internet access throughout the country immediately.”  The Iranian regime has shut down nearly all internet access in the country & is clamping down on growing protests.

Rep. Lois Frankel, co-Chair of the Democratic Women’s Caucus in the House of Representatives, said: “The Iranian regime has shut down nearly all internet access in the country & is clamping down on growing protests.”

“We must hold the regime accountable for its continued human rights violations & show solidarity w the people of Iran crying out for a better future.”

We must hold the regime accountable for its continued human rights violations & show solidarity w the people of Iran crying out for a better future. #IranProtests https://t.co/VnvuD3z6AA

Rep. Brad Sherman, Democratic Representative, said: “Maybe 200 dead, thousands injured and arrested, and no internet for at least five days in the continuing Iran Protests. This is unacceptable. The Iranian regime must end the communications blackout and stop the killings now.”

U.S. Senate Majority Leader Mitch McConnell said: “tens of thousands of Iranian people themselves are raising their voices in righteous anger at what has become of their living conditions and their country. The Iranian people are feeling the pain inflicted by the brutality, selfishness and extremism of their ruling class.”