MENUMENU
Articles > Trump Says There ‘Might be an Escalation’ Between US, Iran

Trump Says There ‘Might be an Escalation’ Between US, Iran 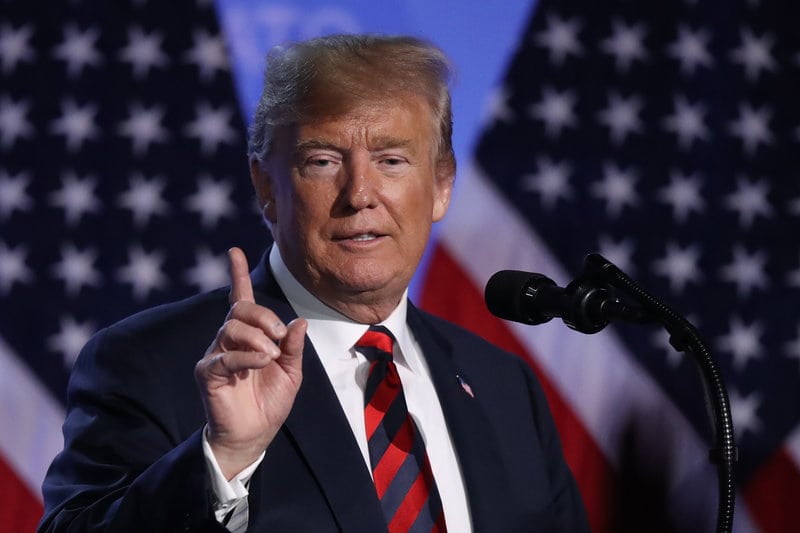 President Donald Trump on Thursday forecast an unspecified “escalation” between the United States and Iran following his withdrawal from a landmark deal that provided sanctions relief for Tehran in exchange for curbs on its nuclear program.

Trump’s remarks came as his administration pressed European nations at a NATO summit to cut off all funding that Iran may use to foment instability in the Middle East and beyond.

Trump asserted that Iran was now treating the U.S. with more respect, although there’s no evidence to support that, and predicted Tehran will seek negotiations as reimposed sanctions bite.

“I would say there might be an escalation between us and the Iranians,” Trump said at a news conference in Brussels.

Over the opposition of European allies, the president in May pulled out from the 2015 nuclear deal involving Iran, the U.S. and other world powers. Washington’s reinstating of economic penalties has worsened Iran’s already-hobbled economy.

After the NATO summit ended Thursday, U.S. Secretary of State Mike Pompeo met with European officials to make the case for clamping down on Iranian “terrorism and proxy wars.”

“We ask our allies and partners to join our economic pressure campaign against Iran’s regime,” Pompeo said in a tweet before the talks.

“We must cut off all funding the regime uses to fund terrorism and proxy wars. There’s no telling when Iran may try to foment terrorism, violence & instability in one of our countries next.” The tweet was accompanied by a map accusing Iran of sponsoring at least 11 terrorist attacks in Europe since 1978.

In another post, Pompeo said “Iran continues to send weapons across the Middle East, in blatant violation of UN Security Council resolutions. Iran’s regime wants to start trouble wherever it can. It’s our responsibility to stop it.”

Other U.S. officials have fanned out around the globe to warn foreign governments to stop buying oil from Iran or face sanctions. Pompeo also has accused Iran of using its embassies to plot terrorist attacks in Europe.

“Just this past week there were Iranians arrested in Europe who were preparing to conduct a terror plot in Paris, France. We have seen this malign behavior in Europe,” Pompeo said in an interview on Tuesday with Sky News Arabia in Abu Dhabi.

He was referring to the arrest of an Iranian diplomat posted to Vienna who allegedly was involved in the plot to bomb an Iranian opposition group rally in France on June 30. The envoy’s arrest in Germany came after a couple with Iranian roots was stopped in Belgium and authorities reported finding powerful explosives in their car.

Iran denies involvement and contends the allegations against its diplomat are intended to damage its relations with the European Union.

The diplomat, Assadollah Assadi, was charged in Germany on Wednesday with activity as a foreign agent and conspiracy to commit murder.

He is suspected of contracting a couple in Belgium to attack an annual meeting of an exiled Iranian opposition group in Villepinte, near Paris, German prosecutors said. He allegedly gave the Antwerp-based couple a device containing 500 grams of the explosive TATP during a meeting in Luxembourg in late June, prosecutors said in a written statement.

Belgian authorities also accuse Assadi of being part of the alleged plot reportedly aimed at setting off explosives at a huge annual rally of the Mujahedeen-e-Khalq group, or MEK, in neighboring France. They want him extradited.

The MEK is an exiled Iranian opposition group based near Paris with some members in Albania. The formerly armed group was removed from EU and U.S. terrorism lists several years ago after denouncing violence and getting Western politicians to lobby on its behalf.