Trump Announces New Sanctions on Iran, Including on Supreme Leader 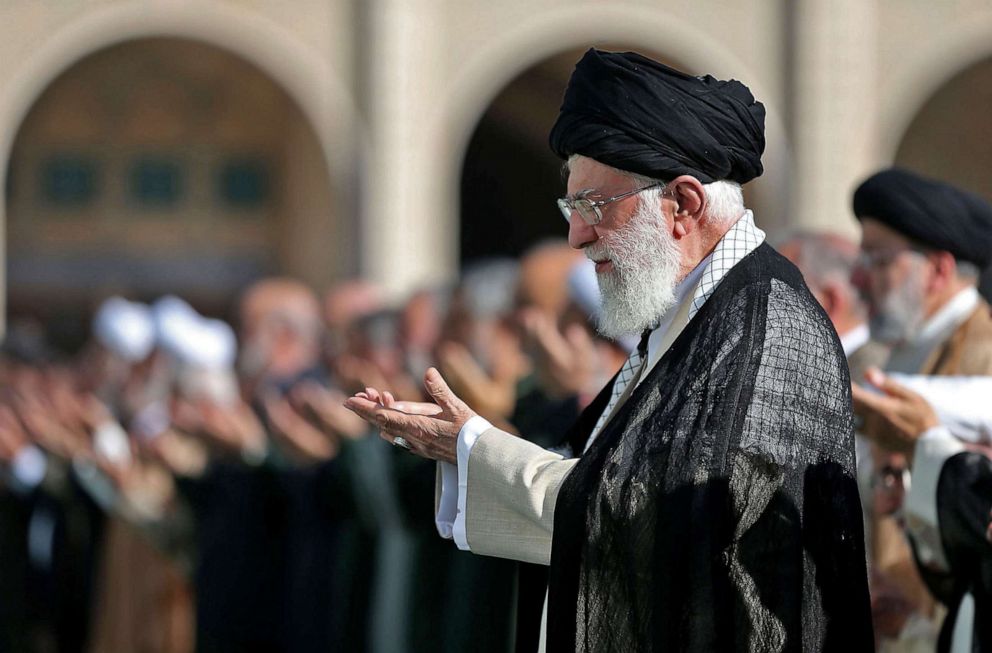 Trump signed an executive order imposing additional sanctions on Iran late Monday morning, as he promised to do on Friday after pulling back on a military strike against Iran for the shooting down of a U.S. military drone.

The president said the order, which also targets other senior leaders of Iran’s regime, was prompted by a series of “aggressive behaviors” by the regime in recent weeks, including the drone shootdown.

The president said the U.S. “does not seek conflict with Iran,” but added that the sanctions “will deny the supreme leader and the supreme leader’s office and those closely affiliated with him and the office access to key resources and support.”(MORE: Trump says he stopped Iran strike with just 10 minutes to spare because he was concerned about casualties)

“They’ve done many other things aside from the individual drone. You saw the tankers and we know of other things that were done also which were not good and not appropriate,” Trump said. “The supreme leader of Iran is one who ultimately is responsible for the hostile conduct of the regime. He is respected within his country. His office oversees the regime’s most brutal instruments.”(MORE: US looks to build ‘international consensus’ around tanker attacks, says Iran interfered with the damaged ships)

Last July, Secretary of State Mike Pompeo said that Khamenei has “his own personal, off-the-books hedge fund called the Setad, worth $95 billion, with a B.”

“That wealth is untaxed, it is ill-gotten, and it is used as a slush fund for the IRGC,” Pompeo said last summer. “The ayatollah fills his coffers by devouring whatever he wants.”

“The assets of Ayatollah (Khamenei) and his office will not be spared by the sanctions,” Trump said Monday. “We will continue to increase pressure on Tehran until the regime abandons its dangerous pursuits, including nuclear weapons, enrichment of uranium, engagement in and support for terrorism, fueling of foreign conflicts, and belligerent acts against the United States and its allies.”

Trump once again called the Iran nuclear agreement “a disaster,” complaining that it was “so short term” that within years Iran would be able to make nuclear weapons.

“That’s unacceptable. Never can Iran have a nuclear weapon,” he said.

The sanctions also target eight senior commanders of Navy, Aerospace, and Ground Forces of the Islamic Revolutionary Guards Corps, known as the IRGC, which is suspected of carrying out multiple attacks in the Strait of Hormuz this month.

“I look forward to the day when sanctions can be finally lifted and Iran can become a peaceful, prosperous and productive nation,” Trump said. “I can only tell you we cannot ever let Iran have a nuclear weapon.”

“I think a lot of restraint has been shown by us but that doesn’t mean we’re going to show it in the future,” Trump said.

After signing the executive order, Trump said he would “love” to negotiate a deal with Iran “if they want to” but said if Iran does not want to, “that’s fine, too.”(MORE: Iran’s Ayatollah Khamenei said he rejects Trump’s offer to talk)

Asked whether the sanctions are in direct response to Iran shooting down the U.S. drone last week, Trump said “probably,” adding, “this is basically something that was going to happen anyway.”

“My only message is that he has the potential to have a great country and quickly, very quickly. And I think they should do that rather than going along this very destructive path,” Trump said. “We can’t let them have a nuclear weapon. He said he doesn’t want nuclear weapons. A great thing to say but a lot of things have been said over the years and turns out not to be so.”(MORE: Trump says Iranian shootdown of US military drone may have been a ‘mistake’)

After Trump spoke, Mnuchin appeared in the White House briefing room and said the sanctions would also hit the commander of Iran’s air force, who he said is responsible for the shooting down of the unmanned, U.S. surveillance aircraft last week. He said the sanctions would affect multiple other top officials in Iran’s “chain of command” and would lock up billions more in Iranian assets.

He defended sanctions against Iran as “highly effective” and said that while sanctions were already in the works, additional measures were added after recent attacks by Tehran. He signaled that Iran’s Foreign Minister Zarif would also face additional sanctions later this week.

Mnuchin was asked if the new sanctions indicate that the Iranian strike of a U.S. military drone was, in fact, intentional.

“I wouldn’t read anything into that,” Mnuchin replied. “The executive order that the president signed was in the works previously. These actions are people who have either made threats or specific things and again I don’t think you should interpret this anywhere otherwise other than we are designating people who we believe were responsible for the chain of command, whether they knew it or not.”

The secretary defended the sanctions against criticism that they are largely symbolic and do not have any real teeth, especially after Iran’s recent attacks on a U.S. drone and oil tankers in the Strait of Hormuz.

“There is no question, these sanctions have been very effective in cutting off funds,” Mnuchin said. “When we do sanctions, we do intelligence. We follow the money and it’s highly effective.”

Trump tweeted earlier Monday that the United States is not being fairly compensated for protecting shipping lanes in the Strait of Hormuz and questioned the United States’ role in providing security in the important maritime region.

The Strait of Hormuz is one of the most important waterways in the world, as it is responsible for being the shipping gateway for 21 percent of global oil and petroleum products. But it has also been a hot spot for tensions between the United States and Iran. Last month, the Trump administration blamed Iran for attacks on oil tankers in the Strait of Hormuz and then last week, Iranians shot down an American drone outside the narrow passageway in the Gulf of Oman.

Secretary of State Mike Pompeo landed in Saudi Arabia on Monday and tweeted following a meeting with the Saudi King that they discussed “heightened tensions in the region and the need to promote maritime security in the Strait of Hormuz.”

“The Supreme Leader’s Office has enriched itself at the expense of the Iranian people,” Pompeo wrote in a statement shortly after Trump signed the executive order imposing the sanctions. “It sits atop a vast network of tyranny and corruption that deprives the Iranian people of the freedom and opportunity they deserve. Today’s action denies Iran’s leadership the financial resources to spread terror and oppress the Iranian people.”

Pompeo noted that “the only path forward” is for Iran “to negotiate a comprehensive deal that addresses the full range of its destabilizing behaviors.”

“Until it does, our campaign of diplomatic isolation and maximum economic pressure will continue,” Pompeo pledged. “When the Iranian regime decides to forgo violence and meet our diplomacy with diplomacy, it knows how to reach us.”