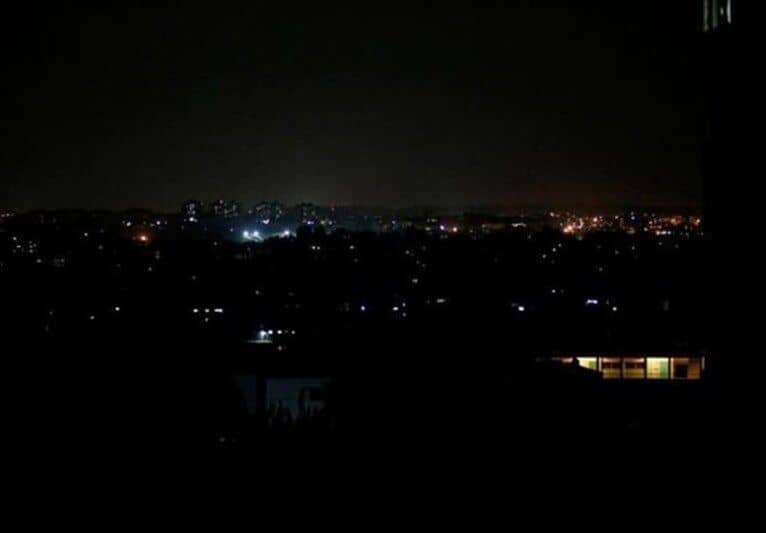 Dozens of Iranian provinces are experiencing extensive blackouts on hot days of summer and amid the Covid-19 outbreak. In recent days, the regime state-run media acknowledged how officials profited from this situation and created it.

Mohammad Hassan Motavilizadeh, CEO of Tavanir, said the situation in the next would be “emergency” and that the Persian Year of 1400 is “an exceptional year in many ways.”

The regime’s parliament is trying to profit $500 million in cryptocurrencies amid an extensive blackout. Besides, the regime continues exporting electricity to Iran’s neighboring countries.

“Yesterday noon, in one of the hottest summer days, many parts of the capital experienced blackouts. While citizens in Tehran complained about the blackout, news indicated other parts of the country were experiencing blackouts,” wrote the state-run Hamdeli daily on Monday, July 5, 2021.

“There was a power outage in Tehran yesterday, while a large part of the capital was in total blackout for several hours on Saturday night,” Hamdeli adds.

“Meanwhile, one of the remarkable points for the public is the widespread blackout by the Ministry of Energy in different parts of the country, right after the elections. In the last hours of Saturday, many areas of Tehran and Alborz were in the blackout, and this power outage occurred completely outside the schedule, which shows the recklessness of the Ministry of Energy,” Hamdeli daily writes.

“More remarkably, however, is the new parliamentary plan to earn $500 million from the cryptocurrencies, which shows that the story has just begun and the crisis will continue in the coming years,” Hamdeli daily acknowledged.

A few days ago, the Economic Commission of the parliament prepared a bill entitled “Support for the extraction of cryptocurrencies and the organization of its internal exchange market.”

According to this plan, the regime’s Ministry of Industry, Mines, and Trade will be responsible for issuing licenses for cryptocurrency mining farms. In cooperation with the Ministries of Economy, Oil, Energy, and Communications, will process the country’s cryptocurrencies mining farms to “generate annual revenue of $500 million in 1401.”

“The electricity industry is under pressure because of the illegal extraction of digital currency, which consumes a lot of electricity,” Hamdeli quoted a government-industry spokesman said some time ago.

“While Officials are planning to profit from cryptocurrencies, there is bad news of blackouts in several parts of the country. In the hottest days of the years, the southern parts of the country are facing more challenges. A netizen, Mojtaba, writes: ‘On Saturday, in the hot and humid weather of Bushehr, we did not have electricity from 1 to 4:30 pm, but no one hears us,’” Hamdeli daily adds.

There are many speculations about the current electricity crisis in Iran. But the main reasons are the regime’s negligence in addressing the damaged infrastructure of power plants, exporting electricity to neighboring countries, and cryptocurrency mining to circumvent sanctions.

“In recent years, the Ministry of Energy officials have not spent money on the production of the power plant. If they have invested in this sector, they have implemented projects without any expertise. Many Ministry of Energy projects result in frequent blackouts, do not exist on the hottest days of the year. Announcing these projects are empty gestures of one of the most important ministries and its subdivisions because if expert power plant projects were carried out, the situation would be different now,” Hamdeli daily wrote on Monday in this regard.

Hamdeli acknowledged that “Meanwhile, cryptocurrency mining is another factor influencing the recent blackouts, and some say that the main reason for this crisis is the export of electricity to neighboring countries.”

“It is estimated that Iran supplies about 40 percent of Iraq’s electricity, and it is noteworthy that according to the Minister of Energy last summer, electricity exports to Afghanistan will increase,” Hamdeli writes.

“While different segments of society face crises, and these widespread blackouts are out of their normal routine, what is the need for electricity exports?” Hamdeli asks.

“According to a report published by the Tehran Chamber, quoted by a Chinese newspaper, since late 2018, Iran has become a turning point for the Chinese in terms of bitcoin mining,” wrote the state-run Rahe-Pardakht website on July 9, 2020.

“Chinese bitcoin farm in Rafsanjan is the largest digital currency production unit in Iran, and 54,000 miners are installed in it,” Majid Fassihi Harandi, Governor of Rafsanjan, told the officials IRNA News Agency in January 2021.

In addition to its devasting effects on businesses, the massive blackouts amid Iran’s amplifying Covid-19 crisis result in more deaths since hospitals cannot use the pulmotors.

“According to Dr. Hamid Emadi, Head of Infectious Diseases Department, of Khomeini Hospital these days, power blackouts have plagued patients diagnosed with Covid-19 with acute pulmonary problems. This is because one of the most basic treatments for these patients is the use of an oxygen machine,” the state-run Jahan-e Sanat daily wrote in this regard on May 24.

The ongoing massive blackouts and the regime’s role have increased people’s hatred toward the regime. Videos from Tehran showed people chanting “Death to the dictator” and “Death to [Ali] Khamenei,” the regime’s supreme leader.

Iranians know the root of all problems in Iran. These crises would not end as long as the mullahs’ regime stays in power. “The truth is that the energy crisis in Iran has emerged. This is a stage where tangible and threatening realities can cause dangerous physical and psychological damage to the infrastructure and related elements of society.” Farhikhtegan daily warned officials on Jun 1.