MENUMENU
Articles > Qassem Soleimani’s successor, Esmail Qaani (Ghaani), is among the most criminal commanders of IRGC and the Qods Force

Qassem Soleimani’s successor, Esmail Qaani (Ghaani), is among the most criminal commanders of IRGC and the Qods Force 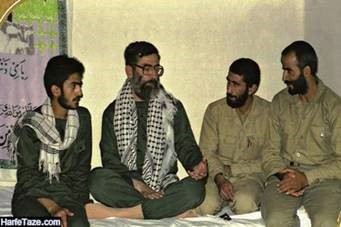 Qaani is among the most criminal commanders of the Islamic Revolutionary Guard Corps (IRGC), who for the past 40 years has played the most significant role in the suppression of the Iranian people and the massacres in Syria, Iraq, Yemen, and other regional countries.

Qaani (Ghaani) for the past 40 years has played the most significant role in the suppression of the Iranian people and the massacres in Syria, Iraq, Yemen and other regional countries.”— NCRI

1. Qaani, born in 1957 in Bojnourd, joined the IRGC since the early days of the establishment of the mullahs’ regime. Since 1980, he was sent to Iranian Kurdistan region to suppress people there.

2. In subsequent years, he was one of the IRGC commanders during the Iran-Iraq war and sent large numbers of youth, teenagers, and students to the killing fields. Khomeini continued that war in order to prolong the survival of his disgraceful rule.

3. As has been stated in the report by the General Command of the National Liberation Army of Iran (NLA) on the Eternal Light Operation, Qaani fought the freedom fighters as the Commander of the 5th Nasr Division. According to the same report, Soleimani was also involved in the same operation as the Commander of the 31st Sarollah Division. (See the General Command Report, p. 49). They were responsible for killing many of the wounded and prisoners of the People’s Mojahedin Organization of Iran (PMOI/MEK) on the battlefield.

7. During the Student Uprising in July 1999, Qaani was one of the signatories of a letter by 24 IRGC commanders to then-regime President Mohammad Khatami, demanding the severe suppression of the students.

8. Qaani has been involved in the export of warmongering and terrorism to Iraq. Since April 2014, Qaani routinely traveled to Iraq to supervise the training and organization of militias. Following the war on the people of al-Anbar by then-Prime Minister Nouri al-Maliki, Qaani traveled to Iraq in a four-member delegation of the Qods Force on May 17, 2014. In subsequent months, as stated in the NCRI Secretariat’s statement on December 26, 2014, the Commander of the Qods Force ” set up a joint Tactical Operations Center in Anbar” with Maliki’s army and police forces. Iraj Masjedi and a number of other senior officials of the Qods Force were established in Iraq and Esmail Qaani Akbarnejad, Qasem Soleimani’s Deputy, regularly traveled to Iraq to supervise the situation.”

9. On May 2, 2015, the Security and Counterterrorism Committee of the NCRI wrote in a statement: “On July 12, 2014, speaking to a group of Qods Force commanders, IRGC Brigadier General Esmail Qa’ani, Deputy Qods Force Commander, announced a new phase of operations by Ansarullah in Yemen. He said: With this operation, we will place Saudi Arabia in a vulnerable position. In an interview with the state-run TV on May 23, 2014, Qaani admitted that the Houthi militias were trained by the regime. He said: “The defenders of Yemen were trained under the flag of the Islamic Republic. The enemies cannot confront the Yemeni fighters.”

10. The NCRI Secretariat’s May 25, 2015 statement said that the responsibility for the Yemen war in the Qods Force rests with Qaani, and he has set up meetings with Houthi commanders in Tehran. At that time, a large number of Houthi commanders and officials who were wounded in the Yemen war were being treated at the Imam Reza hospital in the city of Mashhad. The number of wounded is so large that the hospital is refusing to provide bends to the residents of the city itself. Following treatment, the injured Houthis are sent to the Qasr-e Talai (Golden Palace) Hotel in Imam Reza Street, which is controlled by the IRGC. In its May 2, 2015 statement, the NCRI had also said: “On March 23 (2015), the Qods Force airlifted 52 of the wounded members of the Ansarollah (Houthis) to the IRGC Baqiyatollah Hospital in Tehran. Qaani personally visited them at the hospital.”

11. Qaani played an active part in the clerical regime’s meddling in Syria and was involved in the massacre of the people of this country. The NCRI Security and Anti-terrorism Committee said in its statement on November 30, 2015, that following the killing of IRGC commander Hossein Hamedani on October 8, 2015, Qaani assumed command of the war in Aleppo.

12. Placed on the list of sanctions by the U.S. government, Qaani has organized a vast network of smuggling in order to supply arms and funds to terrorist proxies in various countries, including Afghanistan, Lebanon, Syria, and Iraq.