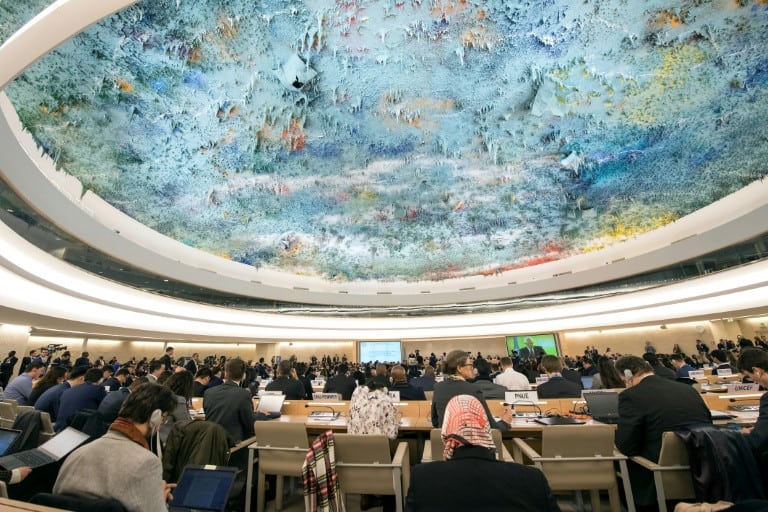 Demonstrators gathered outside the UN in Geneva Tuesday and some diplomats left in protest over an address by Iran’s justice minister to the rights council, despite facing Swiss and EU sanctions over rights violations.

Alireza Avaie took the podium at the Human Rights Council, slamming “appalling deficiencies” there and in other UN rights mechanisms, and accusing Washington and others of “exploiting human rights for their political ends”.

But even before he spoke, his mere presence spurred up to 150 demonstrators to gather outside the UN’s European headquarters, waving flags used by exiled Iranian opposition groups and signs reading “Arrest Avaie”.

Standing near a large pyramid of shoes meant to represent the thousands killed in a 1988 massacre of political prisoners, demonstrator Safora Mohammadi, a 35-year-old law student, insisted Avaie was “a killer”.

“He’s a murderer and actually I was shocked that the United Nations invited him to be present in a conference for human rights,” he told AFP.

Avaie is perhaps the most controversial of the around 100 dignitaries addressing the opening of rights council’s main annual session this week.

Brussels and Bern have slapped sanctions on him, maintaining that as Tehran’s former top prosecutor he was “responsible for human rights violations, arbitrary arrests, denials of prisoners’ rights and an increase in executions”.

According to exiled members of the Iranian opposition, he played a key role in a 1988 massacre of political prisoners.

Amnesty International has said nearly 5,000 prisoners were executed in a matter of months, while Iranian opposition groups put the figure closer to 30,000.

Before Avaie took the floor, a handful of diplomats left the room in a discrete protest against his presence.

When approached by journalists after his speech and asked about the criticism, Avaie walked by stone-faced without responding.

Earlier this week, Washington’s UN ambassador Nikki Haley also slammed the rights council for allowing him to participate, accusing him of “some of the worst human rights violations in Iran”.

The council “should be ashamed”, she said in a statement, and warned the move made “a mockery of its mandate to promote universal human rights”.

As Avaie arrived in Switzerland Monday, a Swiss lawyer filed a complaint on behalf of the National Council of Resistance of Iran, asking the Swiss attorney general to prosecute the Iranian minister for crimes against humanity.

The attorney general’s office confirmed to AFP that it had received the complaint, but did not say whether it would press charges.

The EU sanctions bar Avaie from travel to the EU and freeze any assets he might hold in the bloc, while Swiss authorities told AFP their sanctions against him were only financial.

Avaie is not on the Security Council’s sanctions list.