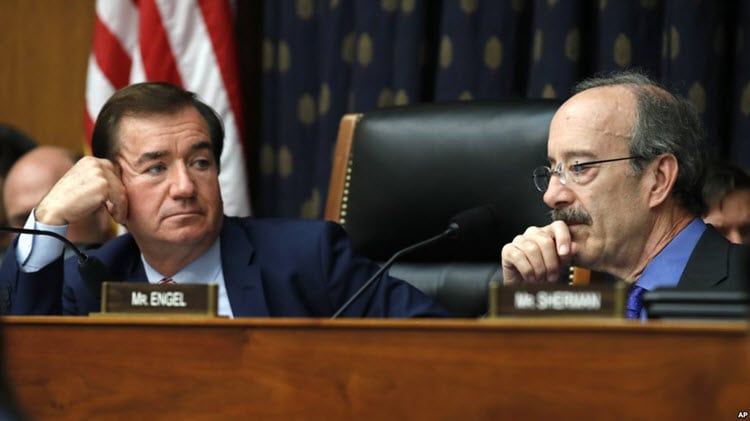 NCRI – The leading Republican and Democrat from the House Foreign Affairs Committee have introduced a bipartisan bill that would broaden sanctions against the Iran regime’s Revolutionary Guard Corps for its role in Syria and its support of terrorism.

This would mean that companies with any share owned by the IRGC would be eligible for US sanctions, which would mean less foreign companies agreeing to work with the IRGC companies and less money ending up in the hands of the IRGC.

Royce and Engels wrote: “[This bill] authorises the administration to sanction entities in which the IRGC has an ownership stake of less than 50 percent, [thereby] raising the stakes for anyone doing business with the IRGC.”

The bill also opposes Iran’s membership in the World Trade Organisation so long as Iran remains a state sponsor of terror.

The IRGC has been blacklisted by the US as a terrorist organisation by the US since 2017, a move that many hoped would cause the fall of the Iranian Regime.

Royce, who will retire in November, said: “[The IRGC has been bankrolling] terror and Iran’s nuclear and ballistic missile program [while] hundreds of its front companies have yet to be sanctioned. This bipartisan bill will close that gap. It will cut off cash to a terrorist group that has the blood of hundreds of Americans, and countless Syrians, on its hands.”

Engel said: “[The IRGC is] the driver of Iran’s dangerous presence in Syria. Alongside Putin, the IRGC has worked with the genocidal Assad regime – which has killed more than half a million of its own citizens. [This bill] marginalises the influence of Iran’s hardliners without undermining US commitments under the nuclear deal.”

The 27-page bill was introduced on Thursday, March 1, just three days before the start of the American Israel Public Affairs Committee’s (AIPAC) annual policy conference in Washington, DC. It will be featured on the AIPAC conference’s legislative agenda.

Given its bipartisan sponsorship, its chance of passage is boosted and hopefully more members of Congress who are concerned by Iran’s ballistic missile programme, nuclear weapons support of terrorism, and human rights abuses will soon come on board.