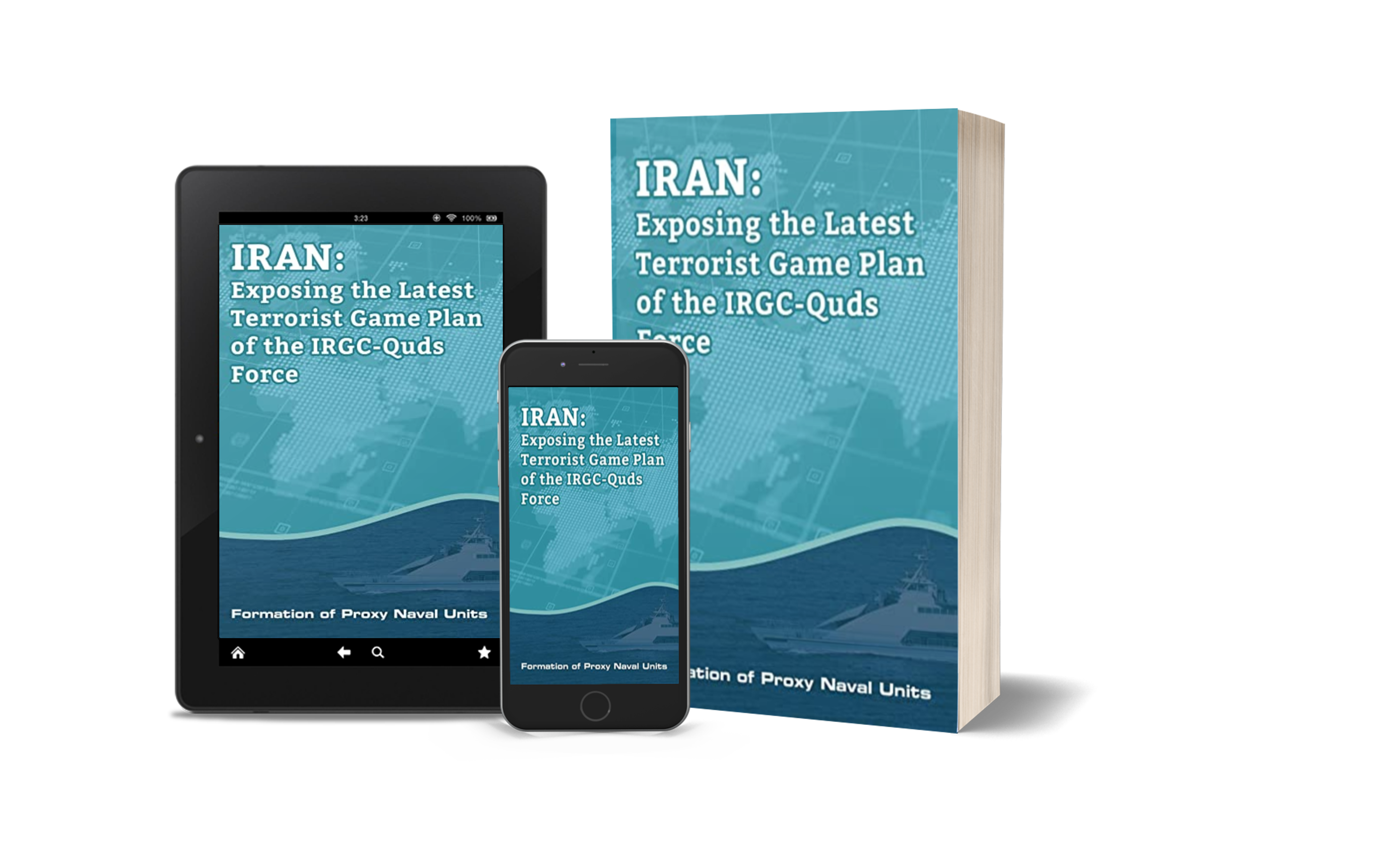 WASHINGTON, DC, March 1, 2022 — On Monday, February 28, 2022, the U.S. Representative Office of the National Council of Resistance of Iran (NCRI-US), released its new book, entitled ‘IRAN – Exposing the Latest Terrorist Game Plan of the IRGC-Quds Force: Formation of Proxy Naval Units.’ The book, for the first time, unveils details of how Iran’s Islamic Revolutionary Guard Corps’ Quds Force (IRGC-QF) has been recruiting mercenaries for newly created, armed, and trained terrorist units to attack ships and maritime targets in the region. The IRGC-QF is the IRGC‘s extraterritorial arm.

The new NCRI-US book is available on Amazon in paperback and Kindle versions. It is also available on Barnes & Noble, and all other major book publishing platforms.

After the elimination of Qassem Soleimani in January 2020, which weakened the Quds Force‘s ability to directly encroach in the countries of the region, the IRGC’s capacity to intrude in Iraq, Lebanon and Syria has been on the decline. To compensate for this failure, the IRGC has turned to intervention in Yemen, especially escalating naval terrorist activities and threatening the international shipping on its shores.

The command headquarters of the Quds Force in Yemen recruits Houthi forces and sends them to Iran for training, where the IRGC- QF conducts training in specialized naval courses for its Yemeni, Iraqi, Syrian, Lebanese, and African mercenaries, who are then dispatched to their home countries to form proxy naval units.

The book shows where these mercenaries are trained, what kind of training they go through, how and where they are dispatched, and what the targets are.

It also shows how the Quds Force has set up a smuggling network to provide weapons and equipment to its proxies for naval attacks. One of the means is using small boats along the coasts of the Sea of Oman, most importantly the seaport known as Bandar-e-Jask.

The Quds Force has equipped the Houthis with speedboats, missiles, mines, and other weapons to expand conflicts into the Arabian Sea, Bab al-Mandab, and the Red Sea.

Since early 2021, and more so since August 2021, when Ebrahim Raisi took office as the new president of the Iranian regime, Tehran has stepped up its maritime terrorist operations using its foreign mercenaries, especially the Houthis.

Tehran’s latest game plan to advance its terrorist agenda by prioritizing mercenaries and stepping up regional mayhem is intended to project power and cover its fundamental weakness inside Iran.

The book concludes by outlining some of the key policy implications of the new revelations:

• The continued offers of concessions by Western countries and lack of accountability for the Iranian regime’s terrorist operations and its killings at home, have emboldened Tehran to step up its defiant behavior, creating mayhem in the region.

• The billions of dollars plundered from Iran’s national wealth that the regime received from the easing of sanctions in the context of the nuclear deal have been expropriated to build and produce weapons, fund and train proxies in order to wage maritime terror operations, and export regional terrorism and warmongering. This is while a vast majority of the Iranian people live below the poverty line.

• Since December 2017, there have been eight major uprisings, as well as successive protests by various sectors of Iranian society demanding fundamental change. Tehran’s latest game plan to create terrorist naval units and step up regional mayhem is intended to project power and cover its fundamental weakness inside Iran. The regime hopes that this image will provide additional leverage internationally and domestically.

• Regardless of what the Iranian regime might do with its nuclear weapons program and its negotiations with the P5+1, Tehran must be held accountable for its proxy wars in the region, its terrorism, its development of ballistic missiles, and its egregious violations of human rights and suppression of its own citizens engaged in ongoing uprisings.

• This new information is added evidence that none of the sanctions against the regime should be lifted. To the contrary, additional sanctions are warranted as a result of the Iranian regime’s escalation of violence in the region and stepped up repression at home.

The book has satellite imagery, charts, and other illustrations.

Some images from the book

Press conference prior to the book’s publication