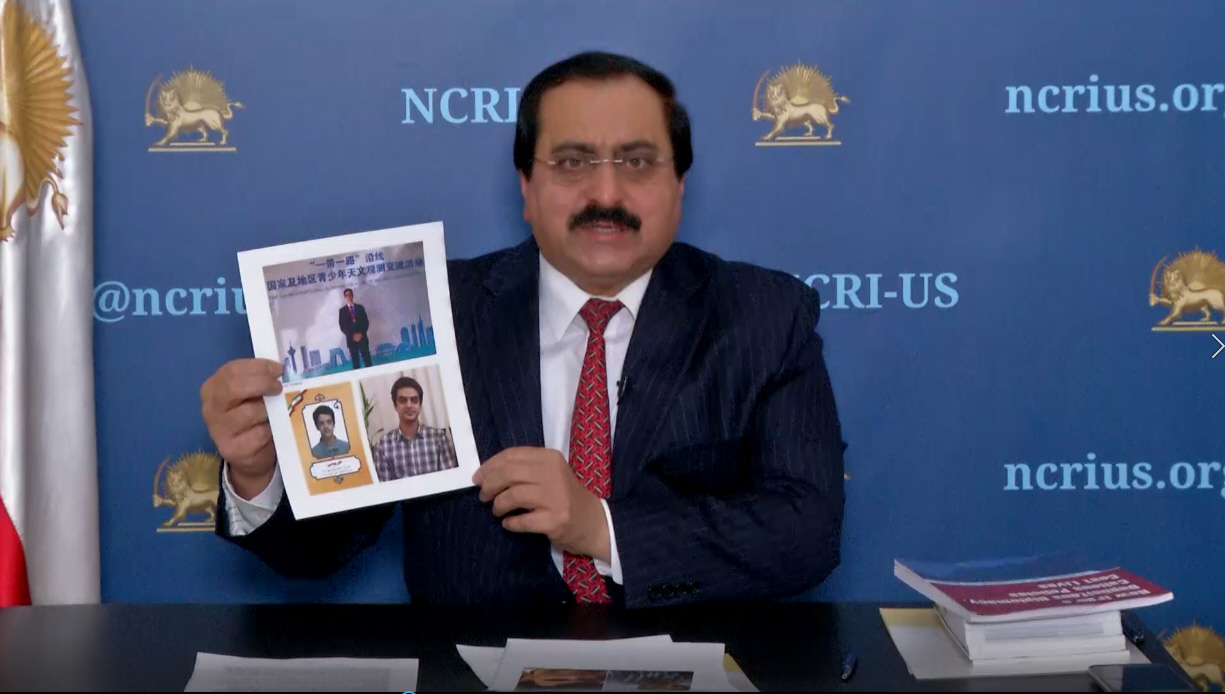 Terrified of looming uprisings, the religious fascism finds no option but to resort to intimidation, suppression, and increased aggression

WASHINGTON, DC, May 13, 2020 — Today, in an online video briefing on Iran, Alireza Jafarzadeh, the deputy director of the U.S. Representative Office of the National Council of Resistance of Iran (NCRI-US), said “Terrified of looming uprisings, the religious fascism finds no option but to resort to intimidation, suppression, and increased aggression.”

Mr. Jafarzadeh opened the briefing, entitled, “IRAN: Rising Suppression, External Aggression Amid COVID-19 Crisis; Implications for Iran Policy,” by welcoming the May 10 statement released by Morgan Ortagus, the State Department spokesperson, calling for the release of two award-winning Iranian college students arrested by the Iranian regime. The Iranian Judiciary has accused them of stirring up unrest during the coronavirus pandemic and of being affiliated with the main opposition movement, the People’s Mojahedin Organization of Iran (PMOI/MEK). The Iranian Resistance has released the names of 18 other captives, among the many arrested on similar charges.

“The Iranian regime is focused on harassing rather than empowering the most talented Iranians… A month ago, the regime arrested two talented students, Ali Younesi and Amir Hossein Moradi, on bogus charges. We join the countless Iranians and others around the world in calling for their release,” Ms. Ortagus said.

Explaining the significance of these arrests, Mr. Jafarzadeh said that the Tehran regime is extremely sensitive to the main universities in Tehran. These two talented students are from the elite Sharif University of Technology. Sharif, Tehran, and Amirkabir universities were the epicenter of the uprising in January 2020. Since the time of the Shah, these three universities have been at the center of student protests and vanguards of other universities and the middle class. They played an important role in the anti-monarchic revolution. Most of the founders and original leaders of the MEK attended these three universities. Enforcing a suppressive atmosphere and giving quotas to paramilitary Bassiji students, the regime tried to depoliticize and pacify them.

Students are also constricted by very low incomes and poverty, which compel them to moonlight, leaving them little time to engage in political activities. The January 2020 protests propelled mainly by these universities’ students were a major defeat for the regime’s depoliticization campaign, and a hard-fought victory for the anti-regime student movement.

The United States needs to augment the pressure on the regime to deprive it of the resources it needs to wage suppression against its own population and against the countries in the region.”

Mr. Jafarzadeh pointed out that Tehran is also concerned about the consequences of its handling of the COVID-19 pandemic, which has led to a devastating death toll in Iran. There have been rebellions in at least 14 prisons nationwide. Dozens of prisoners have been shot to death, dozens more injured. A number of the prisoners who were arrested afterward have been hanged. “The regime feels very vulnerable to its own population in what it describes as the potential for a tsunami of uprisings in the midst of or post-COVID-19 crisis,” Mr. Jafarzadeh added.

In parallel, Tehran has embarked on a heightened campaign of external posturing and aggression in recent weeks. The regime launched a military satellite, clearly a part of its missile program, with the ultimate goal of developing a delivery system for a nuclear warhead. It also continues dangerous provocations against international shipping in the Persian Gulf.

Mr. Jafarzadeh said, “The fact that it hit its own ship, the Konarak, in a rocket strike, highlights the regime’s vulnerability and incompetence. Despite the rhetoric and hollow show of force, this regime is not ten feet tall.”

The IRGC-affiliated and black-listed Mahan Air continues to fly to Venezuela, reportedly to bring in gold in exchange for helping the south American country’s oil refineries. According to the tracking website FlightRadar24, Mahan Air completed at least 12 roundtrip flights between Tehran and Las Piedras, the airport closest to the Venezuelan refinery, between April 22 and May 6.

In closing, Mr. Jafarzadeh remarked, “The question is, what should the international community do in dealing with this situation? The United States needs to augment the pressure on the regime to deprive it of the resources it needs to wage suppression against its own population and against the countries in the region. Any medical assistance or equipment has to go directly to the people, not to the regime, which will in fact divert supplies to Syria or its proxies. Additionally, the U.S. should reach out to the people of Iran as they seek change.”

YouTube Links to all 7 parts of NCRI-US’s briefing & Q&A segment.