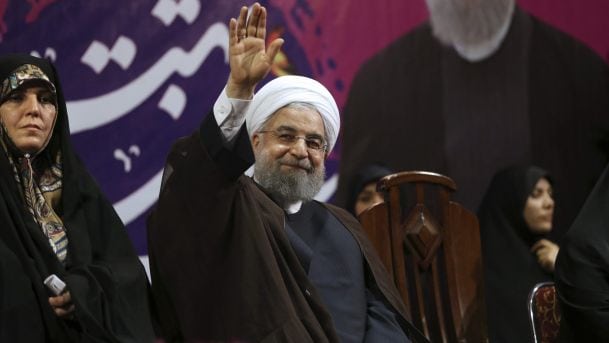 Last Monday, Iranian president Hassan Rouhani rallied his supporters in the northwestern city of Hamedan, where he decried the “violence and extremism” of his hardline opponents ahead of the national elections that are scheduled for May 19th.

In its reporting on the event, the AFP explained that Rouhani has “pushed his liberal credentials” since coming under coordinated attack from hardliners, who emphasize his failure to turn the Iranian economy around after helping to secure relief from international sanctions under the 2015 agreement over the country’s nuclear program.

It bears noting that the Iranian president holds little real authority, since the supreme leader remains the final authority on all matters of state while all legislation is vetted for conformity with the regime’s fundamentalist interpretation of Islamic law. But Rouhani has not even demonstrated the intention to counter existing hardline policies or to otherwise live up to his liberal-sounding campaign promises.

His administration’s Intelligence Ministry has contributed to the ongoing crackdown against activists, journalists, and supposedly pro-Western or secular social trends. And the administration’s Justice Ministry is headed by a man who is well known for serving as one of the judges that condemned 30,000 political prisoners to death in the summer of 1988.

Rouhani’s leading opponent in the current presidential campaign is the mid-level cleric Ibrahim Raisi and it is notable that he also played a leading role in the implementation of the fatwa that led to that massacre. It is little wonder, then, that the main target of that massacre, the People’s Mojahedin Organization of Iran, has been organizing a boycott of the election to call attention to the fact that there are no seriously different options to choose between in this or any other Iranian election.

Unfortunately, a surprising number of Western policymakers were eager to embrace Rouhani as a potential source of moderation within the theocratic regime. It is time to change all of that.

The past four years have repeatedly proven the naivety of this position, which led to the nuclear agreement and a slate of associated concessions to the Islamic Republic. Global security and the stability of the Middle East have suffered as a result, as have the Iranian people, who are suffering under the present crackdown being carried out by regime institutions that have gained wealth and influence in the wake of sanctions relief.

Fortunately, the change of leadership in the United States has improved the prospects for a proper response to the forthcoming Iranian election. The administration of President Donald Trump was quick to put Tehran on notice over its illicit tests of ballistic missiles, its destabilizing interference in the affairs of its neighbors, and its provocative gestures toward US naval vessels passing through Middle Eastern waterways.

Since then, US officials have not shied away from calling out Iran’s bad behavior, such as last month when UN Ambassador Nikki Haley appealed to the Security Council to make Iran’s sponsorship of Hezbollah a leading priority in Middle East policy.

Neither Mr. Trump nor his foreign policy advisors have shown any impulse to distinguish President Rouhani from the regime that he serves. On this point the administration is in agreement with the Iranian opposition, which has insisted that there is no real alternative in the Iranian election, since all the candidates are vetted and approved by the mullahs: Iran’s Guardian Council blocks the candidacy of anyone who has not demonstrated strict fealty to the supreme leader and the theocratic system.

This is not to say that there is no difference between Rouhani and Raisi. But although the hardline challenger can be expected to play a more obvious role in the regime’s antagonism of the West, the underlying policy will remain unchanged after this month’s elections, just as it remained unchanged after the last election in 2013.

If any good has come from the past four years of US policy toward Iran, it is a renewed awareness of how little change can be expected in the country even when the most “liberal” faction of Iranian establishment politics has been empowered. Now that the US enjoys newly assertive foreign policy leadership, it is important to recognize that the same way of dealing with the Islamic Republic is called for regardless of the outcome of the May 19th election.

It will then be as important as ever to use sanctions and the support for home-grown democratic movements as a means to undermine the institutions of terrorist sponsorship and domestic repression, and to ultimately encourage the creation of a government wherein electoral choice is not just an illusion.

As Election Looms, Democracy in Iran is but a Mirage Under Theocracy
Comment
Iranians' Vote for Change Outweighs the Selection (Not Election) of Iran's Next President