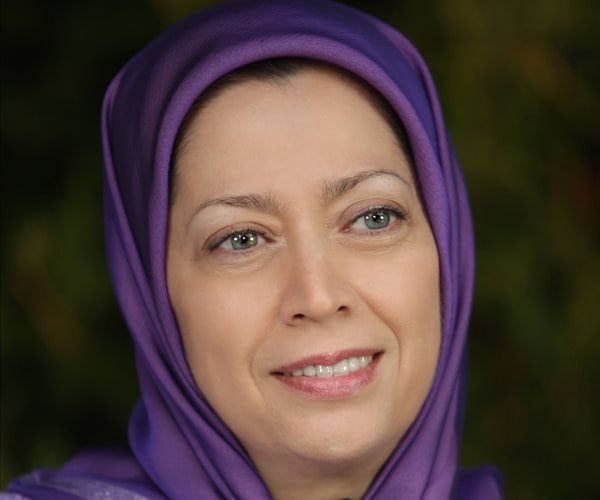 The head of the largest group of Iranian exiles in the U.S. is hailing President Donald Trump’s condemnation of  “gross violations of human rights” in Iran and his intention “to deny the Iranian regime and especially the Islamic Revolutionary Guard Corps funding for its malign activities.”

Maryam Rajavi, president of the Paris-based National Council of Resistance of Iran (NCRI), made clear she felt that Trump’s statements Friday, as he declined to certify the Iran nuclear deal, were only the beginning.

She said Trump and the international community should now work toward what she called “the ultimate solution: the overthrow of the regime and establishment of freedom and democracy in Iran.”

A major step in that direction, she told reporters, would be the designation NCRI, as “the sole democratic alternative to the terrorist, religious dictatorship ruling Iran to rectify the past disastrous policy.”

Rajavi spelled out four steps through which the U.S. could take the lead in urging other countries to take steps against the present government in Tehran.

These include an effort to deny Iran access to international banking systems and to refer the dossier on the regime’s crimes to the United Nations Security Council — especially, its massacre of more than 30,000 political prisoners in 1988.

Rajavi also called for the expulsion of the Islamic Revolutionary Guard Corps and its mercenary militias from Iraq, Syria, Yemen, Afghanistan, and Lebanon.

“They must be prevented from shipping arms and dispatching forces to these countries,” she added.

She also called for the implementation of previous U.N. Security Council resolutions on the clerical regime’s nuclear weapons projects, including a ban on nuclear enrichment and as well as “free and unconditional inspections of military and non-military centers.”

Founded in 1981, NCRI represents political figures, academicians, and other Iranians who have fled their homeland, are dedicated to the overthrow of the Islamic Republic and its replacement with a secular democracy.

The group’s leaders are the lineal heirs to Dr. Mohammad Mossadegh, the colorful nationalist and elected prime minister of post-war Iran. His ouster in a U.S-backed coup in 1953 led to the return to power of the exiled Shah of Iran. Tens of thousands of its activists have been executed by the Iranian regime.

It was the NCRI that first blew the lid off Iran’s clandestine nuclear weapons program in 2002 by revealing the existence of the Natanz enrichment facility and Arak heavy water site.

That triggered inspections by the International Atomic Energy Agency and led to the severe sanctions against the Tehran regime.

John Gizzi is chief political columnist and White House correspondent for Newsmax. For more of his reports, Go Here Now.

The US Government and Treasury Designate Iran IRGC as Terrorist Organization
Comment
U.S. New Policy Targets the Heart of the Iranian Regime, the IRGC