MENUMENU
Articles > Iran Uprising: Will It Continue? to What End?

Iran Uprising: Will It Continue? to What End? 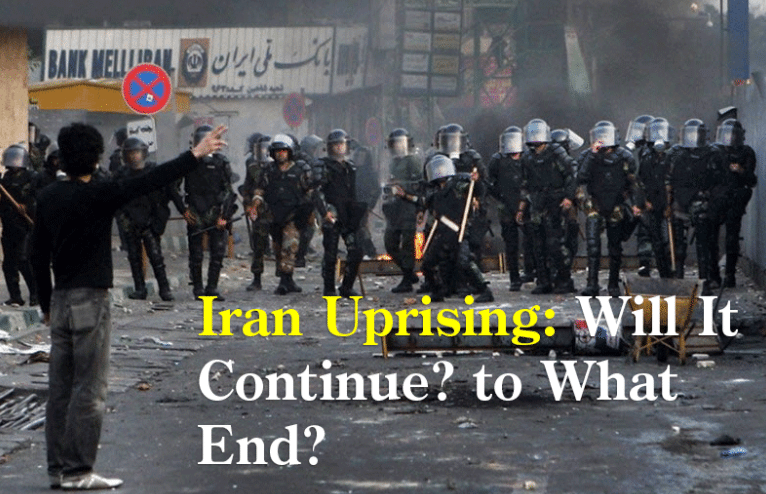 The recent uprising in Iran which began on December 28 late last year, has sent shockwaves around the world, including the current debates among Iran policy circles in the United States.

Many policy experts, analysts, and commentators now view and describe the uprising as “watershed”, or “landmark event” or a “tuning point” in the period since 1979.

The below report is summary of these views and mainly focus on the question of “will this uprising continue.”

Why the Iranian Uprising Won’t Die

Even if these protests are snuffed out, a new line has been crossed. There’s no going back.

… There has been speculation that the uprising will die out or be crushed by the regime. However, a key barrier has been broken: Iranians are no longer contained by the wall of fear created by the Islamic Republic. Not only has Iran’s theocracy lost its legitimacy, but it has lost its ability to control the public through the instruments of violence. Unlike in past protests, countless Iranians have demonstrated that they will no longer participate in the political game of “reformist vs. conservative” (better known as “moderates vs. conservatives” in the West). For them, no one from the establishment, including the so-called reformists, can make their lives better. For them, the entire system has to fall for a new Iran to be reborn…

The current revolt may not lead to the immediate collapse of the regime, but we are witnessing the death throes of the Islamic Republic. Even if the uprising ends today, it is but one step in a long struggle to achieve a more representative, democratic and popular government. Khamenei and Rouhani may blame foreign enemies for the rebellion, but their enemies are the hungry and oppressed people of Iran. They are awake. And they are legion.

Iran’s clerics won’t be able to thwart the will of the people forever.

The US News and World Report

… Two points are clear. First, this is not the first time Iranians have come out on the streets to protest and challenge authoritarian rule, nor will it be the last; the Iranian people have a long history of seeking a liberal political order. Second, the Iranian regime will not significantly modify either its domestic or foreign policies, portending ongoing unrest…

These are only the most recent demands for greater democracy and an end to clerical or autocratic rule in Iran. Indeed, there is a resilient democratic impulse in Iranian history, dating as far back as the Constitutional Revolution of 1905-1911…

Today, a young, well-educated population with a desire for a more liberal political order combined with an autocratic, corrupt regime unable and unwilling to reform suggest unrest will continue, at least episodically, and at some point, challenge the regime…

As the current unrest demonstrates, Iranian aspirations for a liberal, democratic political order remain strong and the clerics will not be able to thwart the will of the people forever.

Iran’s Theocracy Is on the Brink

Every decade the Islamist regime has been in power, an uprising has cost it an element of its legitimacy.

By Mark Dubowitz and Ray Takeyh

Mr. Dubowitz is chief executive of the Foundation for Defense of Democracies. Mr. Takeyh is a senior fellow at the Council on Foreign Relations

… The regime is at an impasse. It has no more political actors—no establishment saviors—to offer its restless constituents.

As with the Soviet Union in its last days, the Islamic Republic can no longer appeal to its ideals; it relies only on its security services for survival. That is deadly for a theocracy, by definition an ideological construct…. In many ways, Rouhani was the ruling clergy’s last gasp, a beguiling mullah who could enchant Westerners while offering Iranians some hope. That hope has vanished…

The Islamic Republic is a relic of a century that yielded multiple ideological regimes claiming to have mastered the forces of history. By now most of them are history.

The Islamic Republic of Iran Is Doomed

But things are likely to get much, much worse before they—eventually—get better.

… It is possible that an Islamist regime with little compunction about killing its own citizens will survive this latest challenge to its authority. Should it survive, the Iranian theocracy will not be the same… The Islamic Republic is entering a period of prolonged transition where it will no longer be able to proffer a theocracy with a human face…

The gap between state and society has never been wider, as the public seeks a responsive democracy while the theocracy’s diminishing cadre insist on even more repressive and isolated government. Revolutionaries who eschew reform and condemn pragmatism as sinful diversion from the path of God are destined for the dustbin of history. In the end, Iran’s (1979) revolution is an impossible one, as it created a theocracy that cannot reform itself and accommodate the aspirations of its restless and youthful citizens. The tragedy of Ali Khamenei is that in consolidating his revolution, he is ensuring the eventual demise of his regime.

… the demographics of the protests and the heavy-handed approach to them bode poorly for the brutal regime, according to Kenneth Katzman, a senior analyst of Iran, Iraq, Afghanistan, and Persian Gulf Affairs at the Congressional Research Service. “[The demonstrations have] morphed into basically a youth protest against the system writ large, and it all goes back to the clerics’ monopoly on power,” said Katzman, whose group provides research and analysis to Congress…

“These are simmering disputes,” said Katzman, who believes that outbursts of protests like the one we’re seeing are “going to keep happening periodically, but at some point the Islamic Republic’s luck presumably runs out.” Katzman isn’t alone in believing that the days could be numbered for the Iranian ruling class.

Reuel Marc Gerecht, a former Iranian-targets officer in the Central Intelligence Agency, is a senior fellow at the Foundation for Defense of Democracies.

The longing for change among the Iranian people hasn’t abated, however. The 1979 revolution had two contradictory ambitions: clerical Islamism and democracy. As theocracy has lost its appeal, the attraction of democracy, ever more secular in its expression, has spread from the college-educated to the working class…

… Gradual change isn’t in the offing. The demonstrators in the streets of Iran today instinctively know this, which is why they rail against the system, chanting: “Death to Khamenei! Death to Rouhani!”

Iranians Try Yet Again to Change Their Government

… Th(ese) protests mirror Iran’s recent history in issues, demands, and responses… “Death to the dictator!” chanted protestors in late 1978 and early 1979 as Iranians successfully mobilized to oust Shah Mohammad Reza Pahlavi despite the monarch’s violent resistance. Thirty years later the phrase “Death to Khamenei” was commonplace when Iranians tried unsuccessfully to undo a presidential election rigged (in 2009)… Yet the underlying political, economic, and social conditions that have fueled these popular uprisings have not changed… not surprisingly, the current protests resemble those of the earlier revolts…

The question is, will the rebellion’s outcome be different this time around? … Indeed, the Islamic Revolution Guard Corps (IRGC) and the Basij paramilitary are being deployed to assist the police in beating up and arresting protestors. But with each set of uprisings, whether successful or unsuccessful, the Iranian people are learning and adapting, and, as the past indicates, will return to their struggle until one day they succeed.

Trump Is Right, This Time, About Iran

… The demonstrations, this time, are different. They are smaller, but more widespread. They reflect the economic woes of the working class more than middle-class disaffection… They originated in Mashhad and went on to Qum, two traditional regime strongholds — a sign of the regime’s ideological bankruptcy. The West-leaning middle class, fed up with the hypocrisy of the mullahs, has long sought political change. But the working class has been a pillar of the regime — manipulated with handouts and slogans. If they have shifted now, all the aging Khamenei has left is the Revolutionary Guards and the Basij…

Still, the courage of Iranians should never be underestimated, nor the deep roots of their quest for freedom, and anything is possible… Today, protesters are chanting that Khamenei should go. They are chanting death to the Revolutionary Guards. They are chanting, “Independence, freedom, Iranian republic.”

How To Support The Second ‘Persian Spring’

Could we see a new Iranian revolution in 2018? For nearly a week now, tens of thousands of Iranians have taken to the streets in various cities throughout the Islamic Republic in the largest mass demonstrations of their kind in nearly a decade. In the process, they have raised the tantalizing possibility that we might in fact be witnessing a second “Persian Spring.”…

Unlike in 2009, Iran’s current protests aren’t just about a rigged election, or factional domestic politics. They reflect a fundamental loss of faith in the current regime’s stewardship of the Iranian ship of state, and in the clerical political system as a whole. That loss of confidence, moreover, appears to cut across all economic strata; unlike the uprising of the last decade, today’s protests do not appear to be largely a middle-class affair. As a result of these features, they may prove to be a good deal more difficult to suppress than their predecessors…

perhaps the second “Persian Spring” now playing out on the streets of Tehran and other Iranian cities will be able to succeed where the first one failed.

… Asking whether Iran’s demonstrations create a “pre-revolutionary” situation may miss the larger point. The process of change has already begun. The regime will use its instruments of repression, and the unrest may wane. But the protests have been so widespread, taking place in what a former U.S. intelligence officer says are 80 cities, that it will be impossible to put the whole country back in a box…

a long game, and while the mullahs have the guns, they seem to have lost the public’s trust… The Iranian regime was rocked this week, and it will fight back ruthlessly. But it’s hard to imagine the theocracy prevailing indefinitely in a society so hungry for change. The West can’t wage this fight. But it shouldn’t be afraid to say who’s right and wrong.

What Could the Iran Uprising Portend?

… the different character of the revolts blanketing Iran reveal a bundle of potential for a new political and social system… The mix of working-class Iranians and young people demanding an end to the regime is a breathtaking development. Widespread labor unrest in a largely closed society like Iran is a salient example that the regime’s foundation is on shaky ground. The chants voiced among the protesters suggest that the outrage is chiefly about human freedom…

If the worst case scenario succeeds and the current protests are smashed, there is a still a strong basis for a new revolt… Put simply, ordinary Iranians loathe the regime of Supreme Leader Ali Khamenei. The inherent potential of regime change will not vanish. In fact, it will increase.