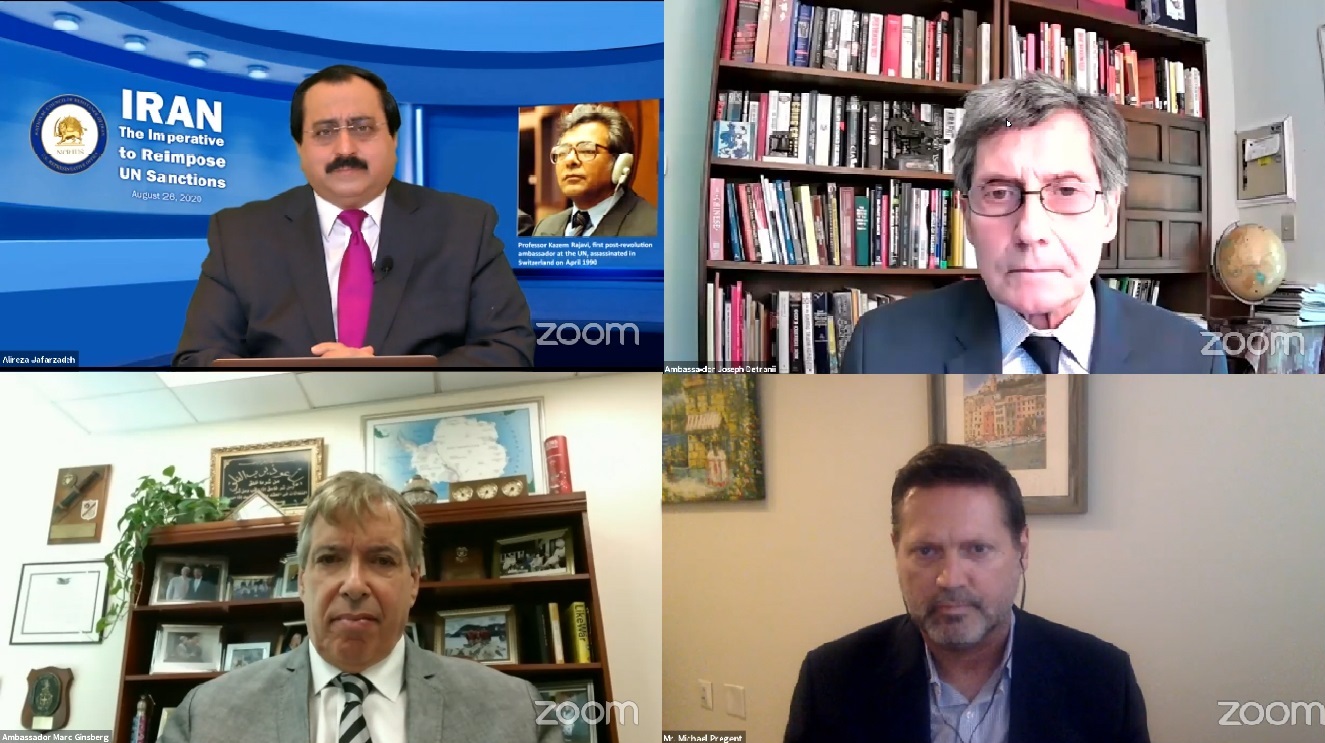 WASHINGTON, DC, August 27, 2020 — On Wednesday, August 26, 2020, the U.S. Representative Office of the National Council of Resistance of Iran (NCRI-US) hosted a panel of leading national security experts to discuss the necessity of reinstituting UN sanctions on the Iran regime. Entitled “IRAN: Reimposing UN Sanctions,” the panel focused on various aspects of the impact on regional and global peace and security if the United Nations arms embargo on the Iranian regime, due to expire in mid-October, is not extended. A new book published by the NCRI-US, “IRAN: The Imperative to Reimpose UN Sanctions,” was released at this webinar.

The panelists discussed the strategic necessity of reimposing all UN sanctions on Tehran in light of the Iranian regime’s regional aggression, whether direct or through proxy militias, its terrorism, assassination of dissidents abroad, missile and nuclear programs and domestic crackdown on the Iranian people.

Ambassador Joseph DeTrani, former Director of the National Counterproliferation Center and Special Adviser to the Director of National Intelligence; Ambassador Marc Ginsberg, former Ambassador to Morocco and former White House Middle East advisor for President Carter; and Michael Pregent, senior fellow, Hudson Institute, were the panelists. NCRI-US Deputy Director and author of The Iran Threat, Alireza Jafarzadeh, moderated the online event, viewed by several hundred observers from across the United States on ZOOM, as well as via livestream on the NCRI-US twitter account and website.

In his opening remarks, Mr. Jafarzadeh introduced the NCRI-US’s new publication, “IRAN: The Imperative to Reimpose UN Sanctions,” saying that the 110-page book “contains details of the outlaw behavior of the Iranian regime, … demonstrating basically that the issue of reimposing all of the UN Security Council resolutions is actually a must. It’s a necessity based on the facts on the ground.”

He added that allowing unrestricted sales and purchases of “arms to a regime with this kind of a nature, is actually feeding terrorism and actually feeding the mayhem that’s been created in the region… Over the past two years, there has been an upsurge in terrorist operations in the West, including in Albania, Denmark, France, Germany, Turkey, and the United States. This is all in the past two years. At the time when the Iranian regime actually needed Europe the most, they stepped up their terror operations on European soil.”

Mr. Jafarzadeh then read over the back cover of the NCRI-US’s new book with quotations from a statement by Mrs. Maryam Rajavi, the President-elect of the National Council of Resistance of Iran (NCRI), which was issued on July 14, 2015, shortly after JCPOA was finalized. Mrs. Rajavi said at the time that:

“Circumventing six UN Security Council resolutions, an unsigned agreement will not close the mullahs’ path to deception and access to nuclear bomb.

“Had the P5+1 been more decisive, the Iranian regime would have had no choice but to fully retreat from and permanently abandon its efforts to acquire nuclear weapons. The P5+1 should now insist on evicting the regime from the Middle East and prevent its regional meddling.

“The money poured into the regime’s coffers must be placed under strict United Nations monitoring to ensure that it addresses the Iranian people’s urgent needs … Otherwise, Khamenei will use these funds to further the policy of export of terrorism and fundamentalism in Syria, Yemen and Lebanon as well as to fill the coffers of the Islamic Revolutionary Guards Corps.

“Any agreement that disregards and fails to underscore the Iranian people’s human rights will only embolden the regime in its suppression and relentless executions, abuse of the rights of the Iranian people, and violations of the Universal Declaration of Human Rights and the UN Charter.”

Circumventing six UN Security Council resolutions… will not close the mullahs’ path to deception and access to nuclear bomb.

Referring to last week’s announcement by Secretary of State Michael Pompeo that “13 officials involved in a brutal and intricately planned assassination carried out in Switzerland in 1990 as part of Iran’s ongoing worldwide terrorism campaign” have been blacklisted, Mr. Jafarzadeh said, “Although the case of the assassination of Professor Kazem Rajavi took place 30 years ago, it’s very encouraging that eventually those assassins are being designated and their names have been published by the United States government.”

“With October 18 and the lifting of the arms embargo coming up, what will Iran do with the weapons they will then purchase and the weapons that they will then sell to their proxies?… There are six resolutions out there and [Iran’s regime] must understand that it cannot get away with bad behavior. And indeed, in the final analysis, it hurts the people of Iran… The people of Iran are the key issue here. Because indeed the regime that’s supporting these proxies is not caring for the people of Iran. Because we see that through demonstrations, we see through other manifestations and that’s where the focus needs to be. And hopefully the international community comes together and says enough! Enough with your exporting of terrorism, enough with the threats of nuclear weapons and nuclear proliferation!”

Explaining what “the regime did under the protections of the JCPOA,” Michael Pregent said, “In 2015, when there was sanctions relief, the Iranian people never saw the economic benefits of that deal. Instead, the regime created new militias in Iraq, began to provide lethal aid to the Houthis in Yemen, began to move Iraqi militias and Quds Force officers to Syria to prop up the Assad regime.”

The Middle East analyst added that “this regime, in its 40-year history, does not own Iran’s history, does not own Iran’s culture, does not own what Iranians think about their futures… But it’s also important to call out our allies and our geo-political foes for supporting a regime that wants to continue to destabilize the region. The Iranian people are against this regime and for the first time in Iraq all ethnic sects, the Shias, the Sunnis and the Kurds, are against Iran’s interference. We were seeing what’s happening in Lebanon. Soleimani built a land bridge under the protections of the Iran deal before the president walked out, and the protesters have occupied that land bridge from Tehran to Baghdad to Beirut and that’s important. Snapback sanctions are a tool to test the resolve of our allies. If they don’t go along, the United States still has a whole host of things they can do unilaterally. The United States has not even done maximum pressure yet. There’s so much more we can do.”

The last speaker, Ambassador Marc Ginsberg, told the panel that the regime has “not only a 40-year record of terrorism; it also has a 40-year record of subjugating and repressing its own public. We tend to forget how many times tens of thousands of innocent Iranians have been murdered by this regime in order to maintain its power. How much money has gone into the coffers of its leadership, the kleptocracy of the theological revolutionary dictatorship that this regime represents. And how ill-advised we are at times thinking that the Iran nuclear deal is going to result in a change of attitude by the regime.”

The former US envoy to Morocco added that “the bet that [Iran would moderate its behavior because of sanctions relief] was rolled by President Obama was meant to see whether or not this could occur. That in fact the regime would change its attitude and would moderate and become a responsible player. Well look, it didn’t happen. And it’s important for my fellow Democrats to acknowledge that… There are case after case of terrorism committed against the Iran opposition leaders. Just two years ago, the Iranian regime dispatched agents to blow up the MEK and NCRI leadership in Paris. These agents who were arrested were on their way to in effect bomb the site outside Paris where many Americans had come… Denmark has expelled Iranian diplomats who were planning and plotting terrorism, and the same holds true for Albania, where Iranian agents have tried to blow up and to commit terrorism.”

In closing, Mr. Ginsberg stressed, “We need a new alliance between the United States and Europe to achieve what the Iranian people need, not what the regime needs in order to sustain itself. We need a covert campaign of diplomatic, humanitarian and economic support to empower opposition leaders like [NCRI President-elect] Madam Rajavi and the NCRI. And if anyone was able to see this huge number of people who traveled from all over the world [in 2018] to the Paris convocation, then you would understand the support that this opposition has, both in and out of Iran.”

Alireza Jafarzadeh closed the session by saying that “the 2015 termination of the provisions of the six UN Security Council resolutions has not prevented the regime from striving to obtain the bomb, nor has it tamed its malign behavior externally or inside Iran. To the contrary, Tehran escalated its nuclear violations, heightened its regional aggression, stepped up terrorism in Europe and the United States, and cracked down on its population in Iran. The experience over the past four decades has shown that the clerics ruling Iran only understand the language of firmness and decisiveness. Therefore, building more pressure on the regime is indispensable to confronting its terrorism and aggression, as well as its attempts to obtain nuclear weapons.”

The NCRI-US Deputy Director added that Maryam Rajavi has repeatedly said, “This regime must not be allowed to acquire even a single bullet. It must not pocket profits from a single barrel of Iranian oil. And it must not spend even a single dollar from revenues belonging to the people for its own survival… It is for this reason that we, on behalf of the people of Iran, reiterate our long-standing call for the reimposition of the six UN Security Council resolutions sanctioning the Iranian regime. Under no circumstances should this outlaw regime be allowed to purchase or sell weapons.”

Mr. Jafarzadeh went on to say that “To end the Iranian regime’s threat, the world must recognize the right of the Iranian people to rise up against their ruthless rulers. Instead of giving concessions, the regime’s leaders must be put on trial in international tribunals for the massacre of 30,000 political prisoners in 1988, the murder of 1,500 protesters in November 2019, and the terror plots against and the assassination of Iranian dissidents abroad.”

Mr. Jarfarzadeh stressed that “When the State Department designated, just last week, the 13 assassins of Professor Kazem Rajavi for killing the most renowned human rights champion of Iran some 30 years ago in Geneva, in broad daylight, the message was clear: There is no statute of limitations for serving justice. That is why that designation should be coupled with designating the Supreme leader, Ali Khamenei; the current president, Hassan Rouhani; the former Minister of Foreign Affairs whose embassy was used for this murder, Ali Akbar Velayati; and the Intelligence Minister at the time, Ali Fallahian, who masterminded this cold-blooded murder. They must all be put on trial for crimes against humanity. By holding the regime’s leaders to account, the world can pave the way for the free Iran millions of Iranians are calling for. A free Iran contributes to world peace.”