Iran Gets North Korean Expertise in Building Up, Testing and Hiding its Ballistic Missiles 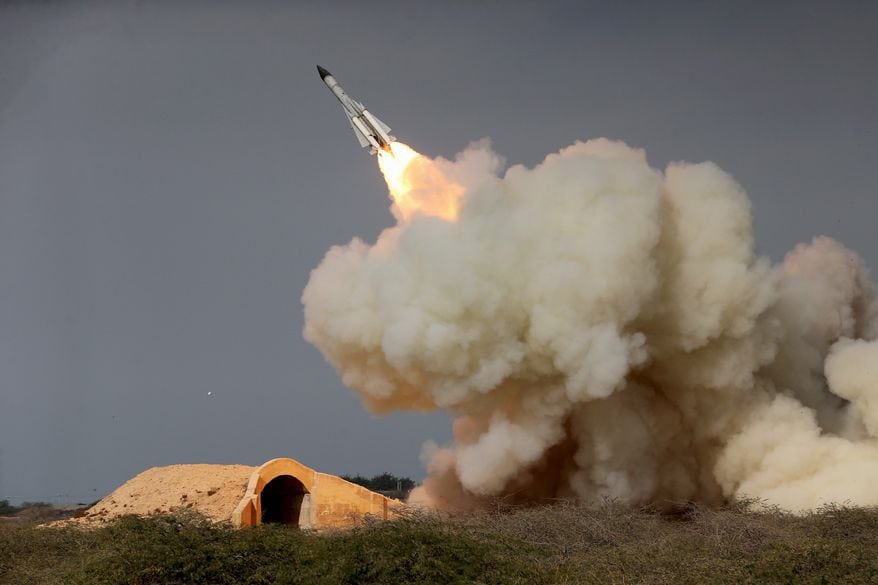 Iran has increased production and testing of ballistic missiles since the 2015 nuclear deal with the U.S. while playing permanent host to scientists from North Korea, which has the know-how to build and launch atomic weapons, a leading Iranian opposition group said Tuesday.

The National Council of Resistance of Iran issued a white paper that the dissidents say identifies and documents work at 42 missile centers operated by the Islamic Revolutionary Guard Corps, the regime’s dominant security force.

A dozen sites had never been disclosed before, said the council, which operates a spy network that has exposed Iran’s hidden nuclear program.

Tehran views expertise from North Korea as being so critical that it has established residences in Tehran for Pyongyang’s scientists and technicians, according to the white paper. North Koreans have shown Iran how to dig tunnels and build “missile cities” deep inside mountains to prevent destruction by airstrikes, among other projects.

“On the basis of specific intelligence, the IRGC’s missile sites have been created based on North Korean models and blueprints,” the white paper said. “North Korean experts have helped the Iranian regime to build them. Underground facilities and tunnels to produce, store, and maintain missiles have also been modeled after North Korean sites and were created with the collaboration of the North Korean experts.”

President Trump has been harshly critical of the 2015 deal struck by the Obama administration and five international allies to lift economic sanctions and other financial penalties in exchange for curbs on Iran’s nuclear weapons programs, but has said he will stick with the accord for now while closely monitoring Tehran’s adherence to the deal.

Iran’s leaders say they have yet to see all the benefits promised with the lifting of sanctions.

But even supporters of the Obama deal say there has been little sign that Iran’s Islamic republic has moderated its behavior on other fronts, including the series of ballistic missile tests in recent months that some argue violate U.N. sanctions. U.S. officials also say Iran continues to back terror groups and foment instability in regional hot spots such as Syria and Yemen.

He said the regime reorganized the IRGC Aerospace Force to focus almost exclusively on missile production and testing rather than aircraft.

“It’s not by accident,” Mr. Jafarzadeh said. “It’s part of their overall strategy.”

He said a huge missile arsenal allows the ruling Shiite mullahs to intimidate Sunni Muslim neighbors such as rival Saudi Arabia. In addition, missiles provide a delivery system for the nuclear weapons that the regime plans to build once the 2015 nuclear deal, known as the Joint Comprehensive Plan of Action, expires in less than 10 years.

“We’re racing against the clock,” he said.

The National Council of Resistance of Iran held a press conference in Washington in April to present evidence that Tehran’s harsh Islamic regime is cheating on the nuclear deal by continuing secret work on atomic bomb components. The Trump administration recently certified that the Islamic republic is living up to its obligations in the deal, which restricts Tehran’s production of only nuclear material, not missiles.

The council’s report pays close attention to the Semnan missile center, a complex of storage facilities and launching pads for medium-range ballistic missiles in north-central Iran. It is here, the white paper says, that Iran melds missile work with nuclear research conducted by the Organization of Defensive Innovation and Research, known by the Persian acronym SPND.

The council first disclosed SPND’s existence in 2011. In 2014, the Obama administration imposed sanctions on SPND for conducting illicit work not allowed at by the pending nuclear deal.

“The Semnan center for missile projects has been much more active after the JCPOA,” a council official said. “The speed and scope of activities and research in Semnan has increased significantly in this period and the exchanges and traffic between SPND.”

Iran has flouted U.N. resolutions repeatedly by test-firing ballistic missiles. In February, the nonprofit Foundation for Defense of Democracies put the number at 14 since the nuclear deal was signed in July 2015. Since then, Iran has conducted at least two more tests.

On Sunday, Iran for the first time since 2001 fired an operational missile outside its boundaries, targeting an Islamic State-controlled town in eastern Syria. Tehran said the ground-to-ground missile strike was retaliation for the Islamic State’s June 7 terrorist attack on the Iranian parliament. In 2001, the regime fired missiles on resistance targets in Iraq.

Iran owns one of the world’s largest inventories of ballistic missiles. GlobalSecurity.org lists more than a dozen different short- and medium-range Iranian missiles, some of which closely resemble North Korea’s Nodong arsenal.

Tehran this year announced the launch of the Emad, which has a range of 1,000 miles. It said the test marked a first for an Iranian precision-guided ballistic missile.

More than ever, the resistance council said, Iran’s religious leaders see missiles as instrumental to their survival strategy.

“The Iranian regime has remained in power in Iran by relying on two pillars: internal repression and external export of Islamic fundamentalism and terrorism,” the council said. “Its illicit nuclear weapons program and its continued expansion of ballistic missiles serve its policy of export of Islamic fundamentalism and terrorism.”