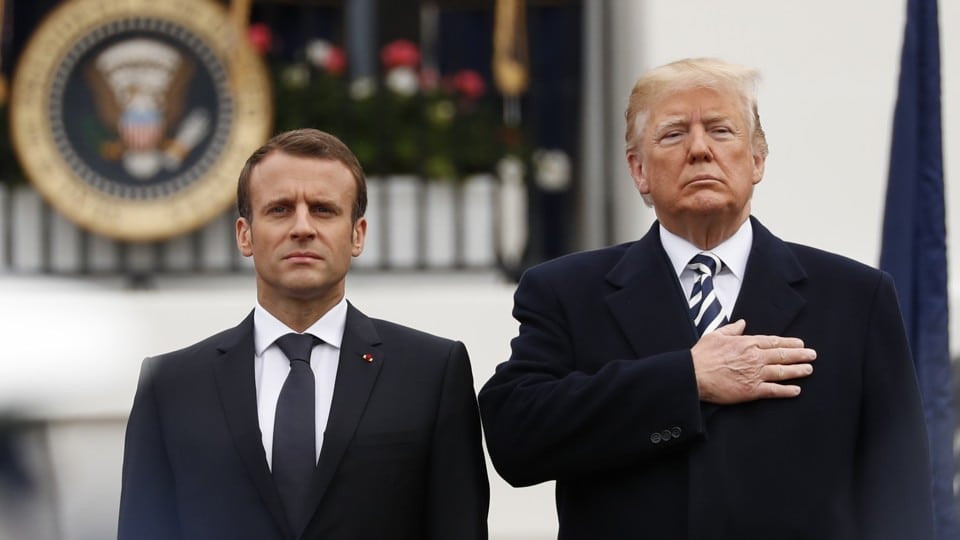 President Trump’s instinct is to scrap the Iran nuclear deal while French President Emmanuel Macron is willing to amend it but not rescind it without another plan in place, but a leading figure in the Iranian resistance says the deal doesn’t stop Iran from developing nuclear weapons but does help the radical mullahs stay in power.

President Trump has until May 12 to declare whether Iran is in compliance with the Joint Comprehensive Plan of Action, or JCPOA, and whether the U.S. will remain a party to the seven-nation agreement.

Alireza Jafarzadeh, deputy director of the National Council of Resistance of Iran, says despite Tehran’s bluster about exiting the deal if the U.S. does, the Iranian leaders badly need the agreement to continue.

LISTEN TO THE RADIO SHOW HERE:

“There’s no way the Iranian regime wants to lose this agreement.  They want to do everything possible to keep it, because the regime knows that absent this agreement, there’s really not too many other options left for them,” said Jafarzadeh, who says threats to the contrary are nothing but “hot air.”.

He says that’s because internal unrest is reaching a boiling point.

“The regime is facing tremendous problems domestically, particularly on the economic side of it.  We’ve seen the uprising going on since December that were built around the economic corruption in Iran and the high rise in prices for very basic food.  Inflation is so high.  Inflation is skyrocketing,” said Jafarzadeh.

Iran is clamping down on media outlets and social media, so reports of the ongoing protests are hard to find, but Jafarzadeh says they are still going strong and are appearing in many different parts of the country.

“The protests are continuing ever since they started.  It expanded to 142 cities starting back in December,” said Jafarzadeh, listing off a number of cities seeing major protests in the past several days.

“Every week there is a new hot spot in Iran.  People are chanting with the same intensity against the regime, making significant demands, none of which the regime can really meet,” said Jafarzadeh.

He says some chants even explicitly scold the government for blaming its problems on America and stating that only the Iranian regime is to blame.

Keeping the deal in place is critical for the Iranian leaders because the money that flowed back into Iran from the agreement has been trumpeted as the solution to Iran’s economic problems.

However, even that good fortune could soon backfire on Iran’s leadership.

“Once the people realize that all the money that was given to the Iranian regime ended up in the pocket of the mullahs, the ayatollahs, and the Revolutionary Guard.  It was basically the military structure and the clerical structure that benefited from that.

“Imagine if there’s more pressure built against the regime what kind of political problems it’s going to create for the Iranian regime,” said Jafarzadeh.

The more pertinent issue for Trump, Macron, and other world leaders is whether the JCPOA is actually preventing the advancement of Iran’s nuclear program.  Jafarzadeh is convinced it doesn’t.

“The agreement has kept almost all of the nuclear infrastructure of the Iranian regime intact.  It has allowed the research and development of more advanced centrifuges that could actually enrich uranium much faster and more efficiently further down the road.

“It hasn’t put any meaningful restrictions on the missile program of the Iranian regime, which is really marching forward with more missile tests on nuclear-capable ballistic missiles.  And it has this ridiculous sunset clause.  In a few years, all those restrictions on the nuclear program are removed,” said Jafarzadeh.

And he says the hurdles to inspections make enforcement of the existing deal virtually impossible.

“Most importantly, there’s no serious access and inspection of a number of nuclear sites where the core of the nuclear program of Iran is.  It’s not just the enrichment but the weaponization part of the program.  We exposed at least six nuclear sites we believe need to be inspected,” said Jafarzadeh.

He says the bottom line is the JCPOA doesn’t stop Iran from getting nukes.

“As of now, the current restrictions are not sufficient enough to prevent the Iranian regime from developing nuclear weapons further down the road,” said Jafarzadeh.