A hellish Pizza Hut delivery: ‘Iran’s bomb’ to take out foes in Paris 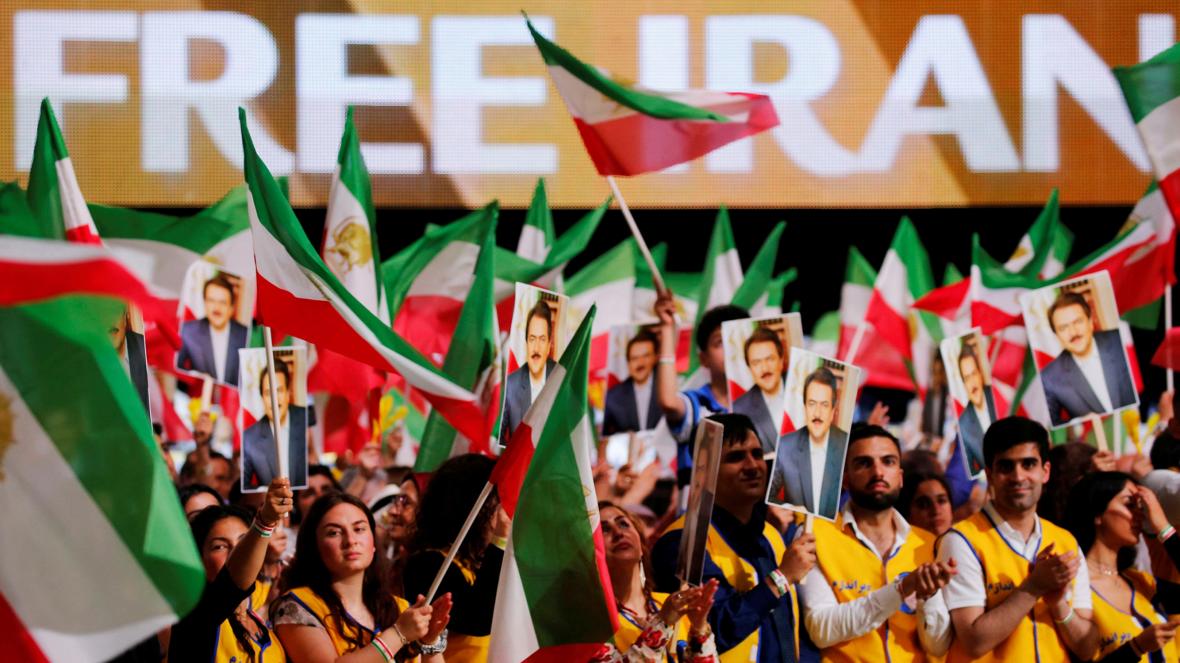 They looked like any couple out shopping as they walked across the Place d’Armes in Luxembourg’s old city and into a branch of Pizza Hut. But the police were watching closely. It was the pivotal moment in a terrorist plot blamed on Iran that is about to be laid bare in court — to the fury of the regime in Tehran, which has threatened retaliation.

Once inside Pizza Hut, Amir Saadouni, 40, and his wife, Nasimeh Naami, 36 — both Iranian — sat down with an Iranian diplomat, who handed them a small package. Naami put it into her handbag and they returned to their grey Mercedes parked nearby.

This was no casual encounter, as the plainclothes officers watching them knew. The diplomat, Assadollah Assadi, 48, is thought to be a member of Iran’s intelligence service, and the package allegedly contained a powerful bomb.

Prosecutors say Assadi wanted the couple to plant it at a mass rally near Paris two days later attended by tens of thousands of opponents of Iran’s theocratic regime and by prominent British and American politicians.

The suspected Pizza Hut plot, which would have caused a mass loss of life if it had succeeded, was thwarted in an operation also involving Belgian, French and German police.

Next week, after a two-year investigation, the three suspects, together with a fourth man, are due to go on trial in Antwerp, where the couple lived, accused of terrorism offences.

Belgian investigators are convinced their actions were approved at the highest level in Tehran, which would make their conviction a serious embarrassment for the Iranians.

“The plan for the attack was conceived in the name of Iran and under its leadership. It was not a matter of Assadi’s personal initiative,” wrote Jaak Raes, head of the VSSE, Belgium’s state security service, in a letter to the federal prosecutor, one of many documents that reveal in extraordinary detail the planning that went into the alleged plot.

Assadi, a third counsellor at Iran’s embassy in Vienna, is also an officer of its intelligence and security ministry — serving in the internal security directorate, considered a terrorist organisation by the European Union — and as such was the “operational commander” of the mission, asserts Raes.

The operation’s primary target appears to have been Maryam Rajavi, head of the National Council of Resistance of Iran (NCRI), a coalition of opposition groups, which was due to hold its annual rally on June 30, 2018.

Among the important foreign guests at the rally in Villepinte, in the northeast suburbs of Paris, were Rudy Giuliani, the New York mayor turned lawyer for Donald Trump, and Bill Richardson, a past US ambassador to the UN.

Several prominent British critics of the Iranian regime also attended the meeting, among them Theresa Villiers, the former environment secretary. “If the defendants are convicted in this case, this must be a wake-up call for the international community to put more pressure on the tyrannical Iranian regime to end its destabilising support for terrorist groups around the world,” she said. Javad Zarif, Iran’s foreign minister, has dismissed the alleged plot as a “false flag” operation by those trying to drive a wedge between Tehran and the West, at a time when Europe and America were at odds over Trump’s decision in 2018 to pull out of Iran’s nuclear accord with the West. Tehran has called Assadi’s arrest “fundamentally illegal” and reserved the right to a “proportionate response” against those countries involved.

The NCRI, which has powerful backers abroad, especially on the American right, has long been a thorn in the side of Iran’s rulers. In 2002 it revealed the existence of nuclear testing facilities that led to Tehran being declared in breach of a non-proliferation treaty. The NRCI was itself declared a terrorist organisation by America in 1997, but removed from the list in 2012.

The plot to target it appears to have been hatched after popular protests that erupted in December 2017 in more than 100 Iranian cities and were blamed by Ali Khamenei, the country’s supreme leader, on “enemies of the republic”. In a speech the following month he claimed the streets were under the control of the People’s Mojahedin Organisation of Iran (MEK), the main element in the NCRI, and threatened “retribution”.

Assadi, who had previously served in Iraq and was familiar with explosives, was ordered to carry out the Paris operation shortly afterwards, investigators believe. Travel records show he made several trips from Austria to Iran during the first months of 2018, apparently in connection with its planning. He then allegedly recruited Saadouni and Naami to plant the bomb. Saadouni had already been living in Belgium for almost a decade after being granted political asylum because of his membership of the MEK. He was later joined there by Naami, whom he met online while she was in Tehran, where she worked as a swimming pool attendant. The couple married but have reportedly since become estranged.

Assadi has refused to co-operate with investigators, citing his diplomatic status, but his alleged fellow conspirators have been more forthcoming. Saadouni revealed he was first approached in 2012 by Assadi, who said he was looking for information about the MEK. They met in Munich, where the diplomat — whom he knew under the code name of Daniel — made clear he was working for Iranian intelligence.

The two men held several more meetings, including in Salzburg, Vienna, Milan, Venice and Luxembourg, at which Assadi paid Saadouni varying amounts of money — sometimes €3,500 (£3,140), and at other times €4,000, “depending on the type of information” he supplied. At Assadi’s behest, Saadouni also travelled in 2013 to the Iranian city of Ahvaz.

Often Naami would come on the trips, too. The couple appeared to have lived comfortably off the money. A pop music fan, Saadouni reportedly spent €400 on a ticket to see Roger Waters of Pink Floyd perform in Antwerp.

In March 2018, while meeting Saadouni on a train between Vienna and Salzburg — apparently to avoid detection — Assadi spoke about the rally near Paris and “said he wanted to do something with the device” there, Saadouni told investigators. Assadi said he would first have to discuss it with Tehran, because the device had to be tested. Travel records show he made several visits to Iran, apparently in connection with the operation,

returning from the last one on June 22. He is thought to have carried the bomb in his luggage, which, since he was a diplomat, would not have been searched.

Six days later in the Luxembourg Pizza Hut, Assadi allegedly handed over the bomb, containing more than 1lb of TATP, or triacetone triperoxide, a powerful explosive popular with terrorists because it is difficult to detect. He also gave the couple €11,710 apparently as payment — or part payment — for the operation.

Although Saadouni and Naami have admitted receiving the package, they deny they knew it was a bomb. “I had no idea that I had been given explosives,” Saadouni told police, saying he thought the device was merely something that “makes a lot of noise”.

Mobile phone records show Assadi texted the couple later that day to make sure they had followed instructions regarding the device, which they referred to as “the PlayStation”. They replied that everything was set. It was agreed they would meet again on July 1 — the day after the attack was due to have taken place.

Western intelligence services were already on their trail, however, apparently as a result of a tip-off from a “partner service” — thought to have been Israel’s Mossad — that Saadouni and Naami “might be involved in an act of violence or an attempt in France”. The VSSE passed on this information to the heads of Belgium’s federal police and prosecution service on June 25 — three days before the Luxembourg meeting.

The pair were arrested on the day of the planned attack in Woluwe-Saint-Pierre, in the east of Brussels. Their luggage was found to contain the explosive, which was “wrapped in plastic and concealed in the lining of a toiletry bag” and was primed to go off. A remote trigger was found concealed among feminine hygiene items in another small bag within a brown handbag belonging to Naami.

The bomb, according to Dovo, Belgium’s bomb disposal unit, was a homemade one that was “very sensitive to heat, friction and shock”. Although the materials in it were freely available, anyone putting it together would have needed “a good knowledge of electronics”. It did considerable damage when it was detonated in a controlled explosion, destroying a remote-control robot and slightly injuring a Dovo officer.

Assadi was arrested on July 1 in Germany, as he was driving towards Austria, where he would have enjoyed diplomatic immunity. Despite Iranian protests, he was later extradited to Belgium.

A red notebook containing instructions to the bombers was found in Assadi’s car. These included how to activate and detonate the bomb, and how the couple should behave after the attack. They were told not to travel by plane for several months, and to stop using old email addresses and set up new ones.

During questioning in March, Assadi told Belgian police that armed groups in Iraq, Lebanon, Yemen and Syria, as well as in Iran, were interested in the outcome of his case and would be “watching from the sidelines to see if Belgium would support them or not”, according to documents obtained by Reuters.

Asked about Assadi’s comments, a spokesman for the Belgian federal prosecutor said: “Such threats can occur, but we always take the necessary security measures.” The diplomat’s lawyer, Dimitri de Beco, denied his client was making threats. “It is absolutely not a threat of retaliation and if it’s understood that way it’s a misinterpretation,” he told Reuters. “He will explain the sense of his remarks to the court.”