MENUMENU
Articles > The UN Failed to Address Iran’s Crimes Against Humanity, It’s Time For Western Democracies to Step In

The UN Failed to Address Iran’s Crimes Against Humanity, It’s Time For Western Democracies to Step In 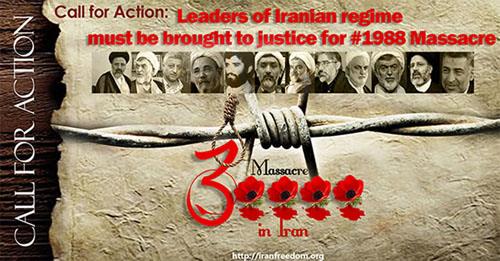 U.S. State Department spokesperson Morgan Ortagus on July 17 called on the international community to conduct independent investigations into the 1988 massacre of political prisoners in Iran, and to provide accountability and justice.

Following a fatwa handed down by Ayatollah Khomeini, then the regime’s supreme leader, in mid-July 1988, over several months more than 30,000 political prisoners, primarily affiliated with the People’s Mojahedin Organization of Iran (PMOI or MEK), were secretly mass executed after mock trials that lasted just five minutes. Their corpses were doused with disinfectant, packed in refrigerated trucks, and buried at night in mass graves across the country.

That summer, the United Nations was given credible information that a massacre was taking place secretly in Iran’s prisons. The UN did nothing to stop it.

Afterwards, when Amnesty International and other human rights groups documented thousands of executions of political prisoners that had taken place, the UN still failed to act.

Even when a 1988 audio tape of members of the “Death Commissions” and top officials discussing the massacre surfaced in 2016, the UN still refused to hold Iranian officials accountable.

These same officials are responsible for the numerous death sentences handed down in recent months to Iranians for taking part in the nationwide anti-regime Iran protests last November.

In 2016, a group of human rights lawyers founded Justice for the Victims of the 1988 Massacre in Iran (JVMI), a London-based NGO dedicated to ensuring accountability for the perpetrators and closure for the victims’ families.

We have interviewed dozens of survivors and obtained photographic evidence of 59 mass graves. We sent all our evidence, including two lengthy reports, to the UN hoping to trigger an investigation, but nothing happened.

Over the past four years, I personally met UN officials on numerous occasions at the UN Human Rights Council sessions in Geneva, and I handed them physical copies of our reports. Each time, they promised to look into the case. But they never did. In truth, the UN fears taking any action that would upset the regime in Tehran.

What more can be expected from them when Iran until recently had a seat on the UN Commission on the Status of Women and on the body that selects NGOs for UN consultative status. Quite simply, the UN is a broken system. (Full disclosure: I used to be in charge of the UN’s human rights office in Iraq but resigned in 2012 when I saw my bosses purposefully turning a blind eye to the slaughter of MEK refugees by the Iran-backed Iraqi government.)

With the UN unable, or unwilling, to take any sort of meaningful action, the responsibility falls on Western democracies to demand justice and to ensure the world won’t witness yet another crime against humanity by the perpetrators of the 1988 massacre who remain in power.

There have already been several independent investigations into the massacre. In addition to the investigations carried out by the JVMI, Amnesty International undertook its own investigation into the massacre in 2018, pointing out that Khomeini made the decision to carry out this crime against humanity as soon as he was forced to accept a UN-backed ceasefire in the Iran-Iraq War.

In a report to the UN in 2017, the Special Rapporteur on the situation of human rights in Iran said: “Over the years, a high number of reports have been issued about the 1988 massacres. If the number of persons who disappeared and were executed can be disputed, overwhelming evidence shows that thousands of persons were summarily killed.”

At an international event on July 19 marking the 32nd anniversary of the 1988 massacre, renowned former UN judge Geoffrey Robertson QC, who carried out a separate investigation into the massacre, described it as the “worst crime against humanity since the concentration camps of the Second World War.”

In his words, there was no accountability at the time because the UN was weak and failed in its duty.

If we entrust an investigation to the UN, it is quite likely that it would take them years, and perhaps decades, just to decide on whether to launch a probe. Instead, what Western democracies can do is to trigger a request at the International Criminal Court to launch a criminal prosecution of the perpetrators.

Crimes against humanity are not bound by the statute of limitations, and even though the crime itself was perpetrated 32 years ago, it is still prosecutable today. Iranian officials brazenly claim Khomeini’s fatwa still stands against the MEK dissidents who seek to topple the regime. The mass murderers responsible for the atrocity today run the Iranian government and judiciary. The survivors are still alive, and the evidence is all readily available. It is not a moment too soon for one democratic government to step up and file a request at the ICC for criminal proceedings to begin against Iran’s mass murderers.

Tahar Boumedra is a former chief of the Human Rights Office of the United Nations Assistance Mission for Iraq (UNAMI) and a legal expert.