MENUMENU
Articles > NCRI’s President-Elect to Fox News: Iran Protests Demonstrate the Public Desire for the Overthrow of the Religious Dictatorship

NCRI’s President-Elect to Fox News: Iran Protests Demonstrate the Public Desire for the Overthrow of the Religious Dictatorship 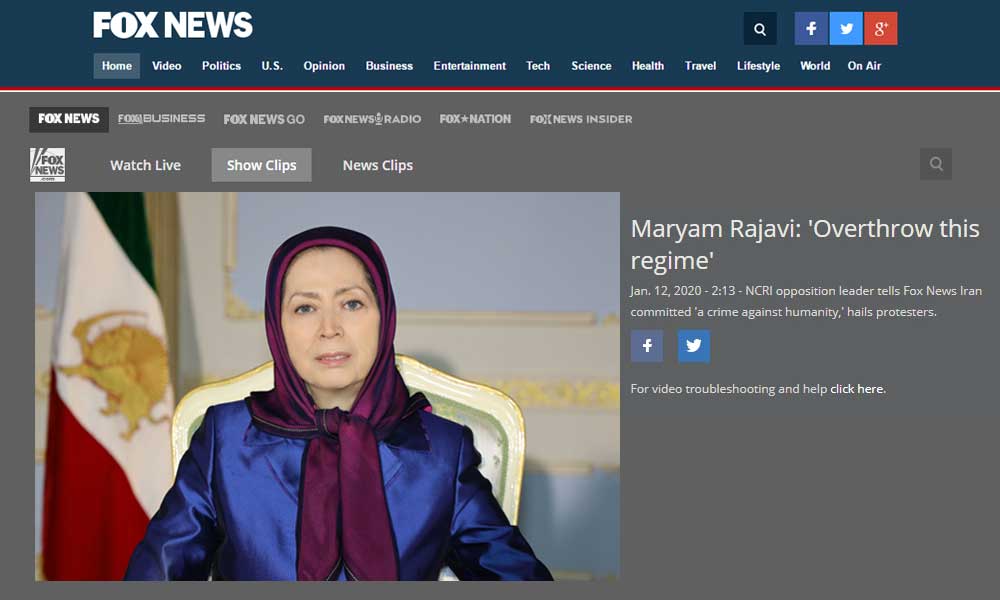 Mrs. Maryam Rajavi, the President-elect of the National Council of Resistance of Iran (NCRI), in an interview with Fox News Channel on Sunday, underlined the Iranian people’s desire for regime change.

While referring to the recent protests by Iranian students against the downing of a passenger jet by the regime’s Revolutionary Guards (IRGC) with 176 victims, Mrs. Rajavi said: “Yesterday and today, the students and people in Iran have again risen up. In their chants, they have targeted Khamenei and the IRGC. They chanted ‘Commander in chief must resign’, ‘IRGC commits crimes and the leader supports’.”

“These demonstrate the public desire for the overthrow of the religious dictatorship and the establishment of a democratic, pluralist republic, which is within reach by the Iranian people and Resistance Units,” Mrs. Rajavi added.

“For this reason, Khamenei has repeatedly, voiced alarm over the activities of the Mujahedin-e Khalq, MEK, inside Iran,” Mrs. Rajavi underlined, referring to the leading role of the “Resistance Units” of the People’s Mojahedin Organization of Iran (PMOI, Mujahedin-e-Khalq or MEK) in guiding the society toward regime change and the utmost fear of the MEK by the regime’s Supreme Leader, Ali Khamenei.

While referring to the elimination of Qassem Soleimani, chief of the IRGC Quds Force and Khamenei’s irreplaceable element, as a “strategic blow,” Mrs. Rajavi said: “Khamenei is weaker and more vulnerable than ever. The elimination of Qassem Soleimani was a strategic blow to his regime. Soleimani was responsible for the massacre of the people in Iran and the region.”

“Firing a missile at a commercial plane which killed 176 passengers is a major crime which has strengthened the people’s resolve to overthrow the religious dictatorship. This crime, similar to murdering 1500 innocent protesters during the November uprising, is a crime against humanity. Those responsible, Khamenei, Rouhani and IRGC commanders, must be prosecuted,” Mrs. Rajavi added.

“The international community must support the struggle of the Iranian people and Resistance to overthrow this regime. This is the only way with which the world can rid the Middle East of terrorism, warmongering and religious fundamentalism,” Mrs. Rajavi concluded, underlining the need for regime change in Iran and International community’s responsibility visa-a-vis this matter.