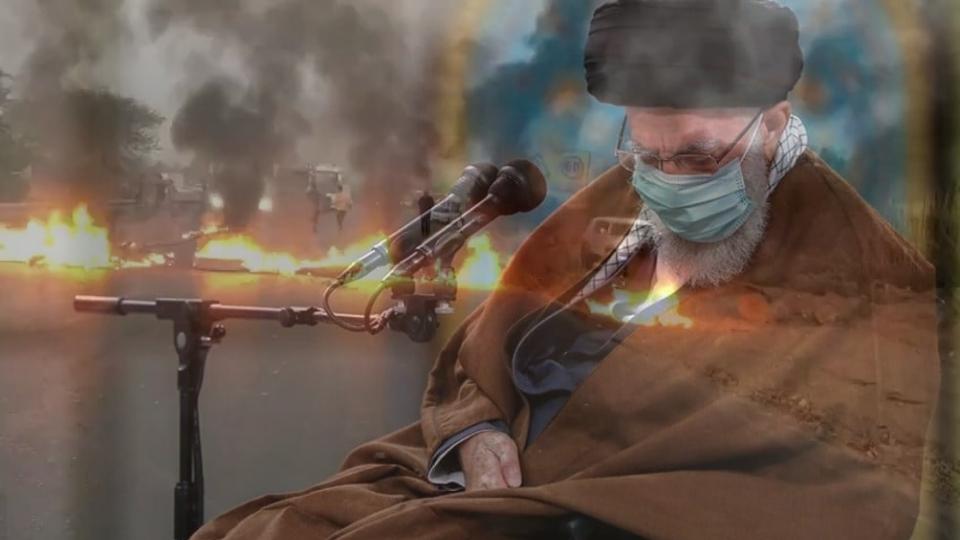 On April 26, on the same day when the Iranian regime’s Judiciary confirmed the 16-year jail sentence for two award-winning elite students for activism against the entire ruling establishment, the regime’s Supreme Leader organized a meeting with a crowd he called “students and members of student organizations” to warn his followers about what is going on in the country’s universities.

Recalling the very first days after the 1979 revolution and contradicting the events that turned most Iranian students into political dissidents, Khamenei said: “From the very beginning, two completely opposite views, namely, ‘the view of the revolution led by Imam Khomeini’ and ‘the view of the reactionary and counter-revolutionary movement’ confronted each other in our universities. The revolution saw the university as a center to produce science and scientific growth and thus a provider of national power, but the counter-revolutionary movement wanted universities to become centers of learning the invaluable relics of Western education in order to turn the country into a consumerist society for Western products.”

“Later, Islamic associations of universities, and then the Basij Student Movement and the Basij Faculty Movement were established to raise the flags of the revolution in universities,” the Supreme Leader added, hinting at the nationwide crackdown on academia that was called the “Cultural Revolution” by Khomeini.

Khamenei then started to highlight the main reason for his sermon. Talking at great length and revealing his concerns about the dangers of the university, he stated: “The Islamic Republic can be proud of its university, but it can also be worried about the university. The reactionary and counter-revolutionary movement, which has links to foreign powers, is still active and has an agenda for universities with the support and guidance of neo-colonial policies. Therefore, we must be worried.”

Dismissing nationwide domestic dissent by tying it to foreign sources, Khamenei added: “According to the Western mindset, the great heritage of thought and culture in the country must be diminished or erased, and the large number of young people who want to climb the hills of honor and national dignity must face despair and anguish, and a sense of impasse must be injected into the young generation. This is why we have to worry and stand up to it.”

The Supreme Leader’s remarks also reflected his great concern about the radicalization of Iran’s society. While indirectly acknowledging the national frustration, he pushed back against fierce criticism of his handpicked government. “When there is a revolutionary management running the country, you have to resort to reasonable demands, and this prevents some people from doubting the importance of the role of students,” he said.

“Avoiding harsh demeanor does not mean compromising and flattery, and I have never and will never give such advice to young people and students, but the purpose of this advice is to avoid harmful and sarcastic literature, which unfortunately has also become very common in cyberspace today,” Khamenei added.

Khamenei also took the time to explain his thoughts about international affairs. His remarks showed serious concerns about how the war in Ukraine will affect his regime’s ally, Russia, and his regime’s status in the world.

“Today, the world is on the verge of a new international order, which is being shaped after the era of the bipolar world order towards the theory of a unipolar world order,” Khamenei stated. “The recent war in Ukraine must be examined more deeply and in the context of the formation of a new world order, which is likely to be followed by complex and difficult processes. In the new and complex circumstances, all countries, including the Islamic Republic, have a duty to maintain their hard and soft authority to ensure that the interests and security of the country are not sidelined.”

If It Wasn’t for the Mek, Tehran Would Have Built the Bomb, Former Official Admits
Comment
Iran Threatens to Execute Swedish-Iranian Physician in Attempt to Influence Stockholm Trial Outcome