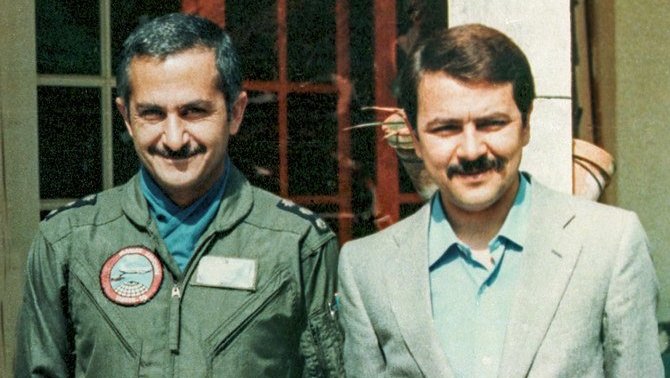 PARIS: Col. Behzad Mo’ezzi, one of the most celebrated pre-revolution Iranian pilots who piloted the Shah’s final voyage out of Iran to Egypt and then Morocco amid the 1979 revolution, died on Jan. 10 at a hospital in Paris aged 83.

His cause of death was leukemia, according to the National Council of Resistance of Iran (NCRI).

Col. Behzad Mo’ezzi served in the Iranian Air Force for almost a quarter-century. As a decorated pilot that had recorded the most flight hours at the time, he was chosen by the country’s air force commander as the Shah’s personal pilot.

He later made history again by piloting a top-secret flight that brought into exile Iran’s main opposition leader Massoud Rajavi, as well as the first president of the Islamic Republic, both of whom were wanted by the newly installed theocracy.

In a statement, Maryam Rajavi, president-elect of the NCRI, said: “I have always been indebted to him because of his great patriotic contribution of taking Massoud Rajavi to safety.”

Mo’ezzi became a prime target for the regime’s security and intelligence apparatus, including the extraterritorial Quds Force.

He was born on Feb. 6, 1938 in Tehran. A descendant of the royal Qajar dynasty, his grandparents were affluent landowners. His father was Lt. Gen. Mahmoud Mo’ezzi, a tall and high-ranking law enforcement officer “who was also a loving father.”

In later life, Mo’ezzi looked back on his younger years, saying that his father was a formative figure in his life. The elder Mo’ezzi had “a heart of gold,” he said. His mother, he recounted, took over the family’s finances, fearing that the elder Mo’ezzi would donate it all to charity.

His high school years in the early 1950s came during the heyday of Iran’s oil nationalization movement led by charismatic nationalist leader Mohammad Mossadeq. Mo’ezzi would soon identify politically as a disciple of Mossadeq and as an ardent patriot.

After first setting his sights on a career in agriculture, Mo’ezzi saw an advert in a newspaper calling for air force pilots and decided to apply. After a grueling recruitment process, he was accepted.

Three years before the revolution, he had the most flight hours in the country’s air force and was selected as the Shah’s personal pilot.

In 1979, as the Shah was forced to flee the country amid growing revolutionary fervor, Mo’ezzi piloted the monarch’s final flight to Egypt and then Morocco. However, he took the Shah’s plane back to Iran as “property of the Iranian people,” earning popular accolades.

When Iraq invaded Iran in 1980, Mo’ezzi signed up to serve in defense of his homeland. He flew more than 1,200 hours during the Iran-Iraq war and was one of the most respected pilots among his peers in the air force. At the same time, he was secretly in contact with the primary opposition to the clerical regime, the Mujahedin-e Khalq (MEK).

As the mullahs squeezed the last of political freedoms, opposition forces were forced to flee the country. On July 29, 1981, a month after Khomeini’s forces opened fire on a massive peaceful protest by 500,000 people in Tehran, Mo’ezzi piloted another historic flight. In the Boeing 707 that he flew was Massoud Rajavi, the MEK leader, and the first post-revolutionary president, Abolhassan Banisadr.

That flight, which took off in complete secrecy from Tehran Mehrabad Airport’s first fighter base, was the culmination of an extraordinarily risky operation full of unknowns and international intrigue.

After the flight took off, Mo’ezzi turned off the flight’s transponders to avoid detection. Aware of the pilot’s experience, senior air force officials excluded the possibility of a crash and ordered F-14 Tomcats to pursue the aircraft. But the Tomcats refrained from shooting down the 707 Tanker out of respect for Mo’ezzi, who flew the plane over the Damavand peak and crossed Iranian airspace into Turkey, finally arriving in Paris, where then-French Foreign Minister, Claude Cheysson, allowed the plane to land. Once in Paris, Rajavi campaigned for the international recognition of the NCRI as the democratic alternative to the regime.

I remember that Wednesday quite well because it was the happiest day of my life. I was working on a term paper for one of my graduate courses at the University of Michigan in Ann Arbor. I usually listened to NPR. Hearing the daily news of executions, I was naturally worried about the fate of MEK members in Iran, particularly Massoud Rajavi. The NPR interrupted its normal programming to report that an Iranian military Boeing 707 had landed in Paris and on board was Banisadr. I wished Massoud was also on board the plane. Suddenly, I heard a man speaking in English with a bit of an Iranian accent. He said: “I am Col. Behzad Mo’ezzi, and the gentleman to my left is the leader of the MEK, Massoud Rajavi.”

I could not believe it and literally jumped. I got into my car and rushed to the campus to tell my friends who had set up a table near the library to tell the students about the regime’s human rights abuses. It was an unforgettable day for us, as is the case with millions of Iranians who remember that moment.

Col. Mo’ezzi, a hero in the minds of many in Iran — especially the generation of the revolution — never abandoned his dream to fly back to Iran with the leaders of the opposition. He lived a humble life in the NCRI’s headquarters near Paris, reflecting on a full life intertwined with Iran’s history. He is survived by two children, a son, Amir, and a daughter, Sara, who live in Paris.

• Ali Safavi is a member of the Foreign Affairs Committee of the National Council of Resistance of Iran.

Pleading for Justice to the Victims of 1988 Mass Executions of Political Prisoners in Iran
Comment
IRAN: Coronavirus Death Toll Surpasses 204,600