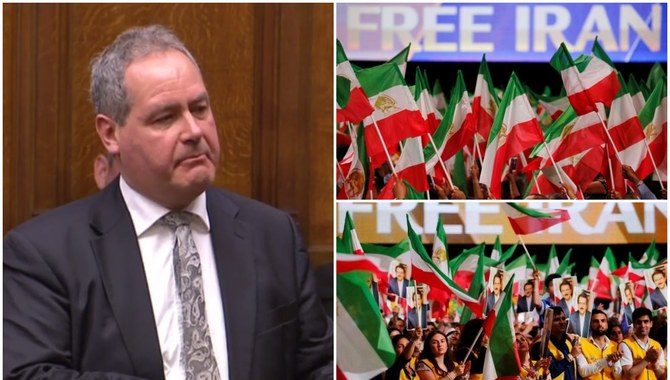 LONDON: Five British members of parliament (MPs) were among the thousands who escaped a terror plot at a rally for Iranian resistance groups in Paris two years ago, that was allegedly engineered by an Iranian diplomat.

A bomb intended to explode at the Free Iran gathering in the French capital in June 2018 was found in the car of an Iranian couple who were arrested in Brussels.

The rally, organized by Iranian umbrella opposition group the National Council of Resistance of Iran (NCRI), had tens of thousands of people in attendance and was aimed at highlighting the global, democratic, and grassroots opposition to the current regime in Tehran.

An Iranian diplomat, Assadollah Assadi — believed to be the mastermind of the plot as well as an intelligence operative — has gone on trial in Belgium for allegedly smuggling the explosives used in the foiled plot from Iran into Europe by using his diplomatic privileges to avoid airport security checks.

Assadi was an ambassador in the Iranian embassy in Vienna, and his alleged involvement in the bomb plot has prompted discussion as to the true role of Iranian diplomats abroad.

Bob Blackman, one of the MPs who attended the rally, told Arab News that the plot was an attempt by the Iranian regime to “take revenge” on the NCRI and their leader Maryam Rajavi for the groundswell in support for their group among Iranians inside Iran and abroad.

He reiterated a parliamentary motion in which he urged the UK and European governments to take seriously the security threat posed by Iran’s foreign diplomatic missions.

The politician said he condemned Iran’s “misuse of diplomatic privileges” and “reiterates the need to try the suspects and expel other Iranian intelligence officers operating under diplomatic cover or as ex-members of the opposition.”

The UK, Blackman added, should “make it clear to the regime that its continued use of diplomatic missions and embassies to facilitate, carry out, and plan terrorist attacks will have serious consequences, including expelling of diplomats and closing Iran’s embassy.”

He also urged the British government to “impose punitive measures on the regime’s leadership including (Supreme Leader Ayatollah Ali) Khamenei, (President Hassan) Rouhani, and (Foreign Affairs Minister Mohammad Javad) Zarif who decided and were involved in the Paris bomb plot.”

Blackman added: “The UK government must also proscribe the entire IRGC (Islamic Revolutionary Guard Corps) and the Ministry of Intelligence as terrorist organizations because these organizations are instrumental in the regime’s export of terrorism.”

The NCRI is frequently referred to as Iran’s “government in waiting” and the body continues to attract high-level attention and endorsements for presenting a credible alternative to the clerical regime in Iran.

Ali Safavi, a member of the NCRI’s foreign affairs committee, told Arab News that the 2018 bomb plot saga once again underscored the threat posed by Iran’s regime not just to its own people and the Middle East, but to the world at large.

He said: “Today’s trial, a culmination of more than two years of investigations, makes it palpably clear that the use of terrorism as a tool of statecraft is part and parcel of the Iranian regime’s DNA.

“This is an imperative and deterrent step to prevent the godfather of international terrorism making the European territory its roaming ground. The Iranian regime’s leaders must be prosecuted and face justice.”