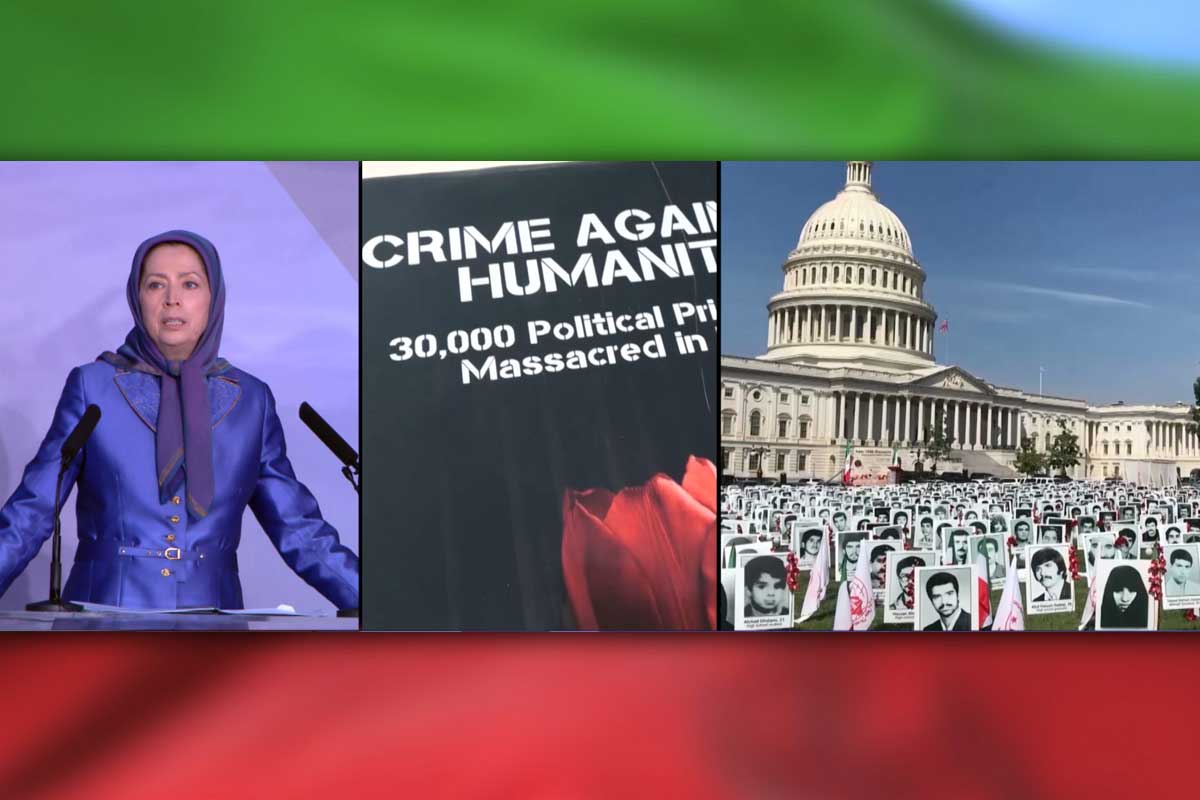 NCRI President-elect Maryam Rajavi: The 1988 massacre of 30,000 political prisoners is “one of the most horrifying and indescribable crimes” of the regime.

WASHINGTON, DC, August 1, 2020 – Over the July 17th weekend, the Iranian Resistance held its annual “Free Iran Global Summit.” Due to the COVID-19 pandemic, this year’s gathering was hosted virtually over the course of three days in Ashraf 3, home to members of the People’s Mojahedin Organization of Iran (PMOI), also referred to as the Mojahedin-e Khalq (MEK). The first day brought together supporters of a free Iran from six continents, at more than 30,000 locations in over 100 countries, including Iran and Albania.

The second day was devoted to the 1988 Massacre of 30,000 political prisoners, mostly MEK members and supporters, executed during five months of evil largely ignored to this day by the international community. The massacre was carried out per a fatwa (religious decree) issued by then Supreme Leader Ruhollah Khomeini. Many of the current officials of the mullahs’ regime played active and key roles in this crime against humanity. The culprits include the regime’s current Supreme Leader, Ali Khamenei, who was president at the time, and Ebrahim Raisi, currently head of the Judiciary who in 1988 was a member of the “Central Death Commission” in charge of executing political prisoners.

Mrs. Maryam Rajavi, President-elect of the National Council of Resistance of Iran (NCRI), delivered the keynote speech at the Free Iran Summit. She described the 1988 Massacre as “one of the most horrifying and indescribable crimes” of the regime. “With his fatwa sanctioning the massacre, Khomeini intended to annihilate the MEK,” she added.

The Call for Justice movement, initiated by Mrs. Rajavi in 2016, has played a pivotal role in shedding light on the 1988 Massacre and other crimes against humanity committed by the mullahs’ regime. “Over the past 32 years, the Iranian Resistance has held hundreds and thousands of conferences, rallies, marches and symbolic trials in this regard and divulged numerous documents, names of victims and locations of their unmarked graves,” the Iranian opposition President continued.

Paying tribute to the tireless efforts of MEK martyrs and Iranian Resistance leader Massoud Rajavi, Mrs. Rajavi concluded her speech by saying, “For 40 years, the mullahs have been viciously crucifying the MEK and the Iranian Resistance, particularly Massoud Rajavi, every day with a barrage of lies and unfounded allegations, just like they killed and tortured our people… But today Massoud Rajavi’s name inspires the rebellion and the fight for freedom, just as his name inspired the perseverance and resistance of political prisoners during the 1988 Massacre… There will come a day when his dream of a free Iran will come true. Yes, the day will come when the flowers of freedom and popular sovereignty will bloom in Iran.”

The Summit’s second day also saw an array of distinguished political and human rights figures address the event, several Americans among them. Ambassador Lincoln Bloomfield, former State Department Special Envoy and Former Assistant Secretary of State for Political Military Affairs, went into detail about the disinformation campaign of the regime and its attempts to discredit the NCRI and MEK, both internationally and in Iran. In his words, “I have studied the allegations against MEK and NCRI, and they were not supported by credible evidence. I prepared an independent report and became very interested in the deeper story. The more I looked, the more I found the true story of the MEK has been erased and misrepresented. They advocate democracy and freedom of speech.

Former U.S. Ambassador to the UN Human Rights Commission Kenneth Blackwell spoke: “We must expose this regime and its reign of terror with what we can. We must demand that the world court try these criminals for their crimes against humanity. We must bring support to the men and women who are willing to do what they are able to do inside of this repressive regime in Iran. By supporting the people of Iran, we give humanity and freedom a fighting chance. We must be the points of light in the shadow of darkness. We must be agents of change, take the risks to be supporters that there be actions taken against this regime of darkness and terror. Let’s commit to be a force for change.”

Former political prisoners and MEK members also gave heart-wrenching testimonies of the torture they suffered at the hands of the mullahs during the summer of 1988. Homa Jabari urged world leaders to stand on the side of justice and to “remember the suffering of the Iranian people” when they craft policy towards the regime. “We were the generation who went to the execution chambers because we chose freedom. We chose this path with open eyes and full knowledge, and decided to sacrifice everything for freedom. The world must know what happened to the MEK in the past 40 years. European leaders should know that when they shake hands with this regime, they must remember the suffering of the Iranian people.”

Another MEK member and eyewitness to the atrocities, Damona Taavoni, said, “My father was executed by the regime. I was taken to prison with my mother when I was six years old. I remember the shouts of prisoners in torture chambers. As I grew up, I heard inspiring stories about the victims of the 1988 Massacre. Prisoners were asked a single question: ‘Do you support the MEK?’ Those who said yes were executed. Those who said no, survived. We know that 30,000 said yes.

“I’m here to be the voice of the 30,000 political prisoners who died. They made a decision to sacrifice their lives so people in our country don’t have to sell their body parts to put food on the table for their families,” added Taavoni.

Bahador Kiamarzi, also a MEK member and eyewitness to the 1988 Massacre as a child, told the summit, “When I was a child, I was in prison with my mother. I had never seen my father. Once, I was told I would get to visit him, but I only got to peek at him through the frame of the cell door. The regime didn’t let me see him because they wanted to enforce the utmost pressure on him. He was executed shortly after, along with 30,000 other political prisoners in the Iranian regime’s prisons… We will continue our struggle for our people. The sacrifice of the prisoners will not be in vain. We are more determined than ever in Ashraf 3 to overthrow the regime.”

The last eyewitness to address the second day of the Free Iran Summit was MEK member Kazem Panahi: “I was an engineering student in Tabriz after the 1979 revolution. I was arrested in 1981 for being an MEK supporter… We have repeatedly called on the United Nations and UN Human Rights Council to investigate the regime’s crimes. The regime leverages its lobbies outside Iran to launch a demonization campaign against the MEK, who are in fact the primary victims of the regime’s crimes. The goal of these demonization campaigns is to simply say that there is no democratic alternative to the regime. The regime wants to force the world to come to terms with them. But the MEK will never give up their efforts to overthrow the regime.”

The summit drew together a variety of speakers from around the world, all of whom noted that in word and deed, the NCRI and MEK have demonstrated that they want to return sovereignty to the people of Iran, not to seek power at any cost. Many groups and movements have said as much before, but as the testimony of the former political prisoners and experts at day two of the Free Iran Global Summit underscored, actions speak louder than words, and nothing speaks louder than the MEK and NCRI’s selfless resistance in the face of an evil, murderous regime.