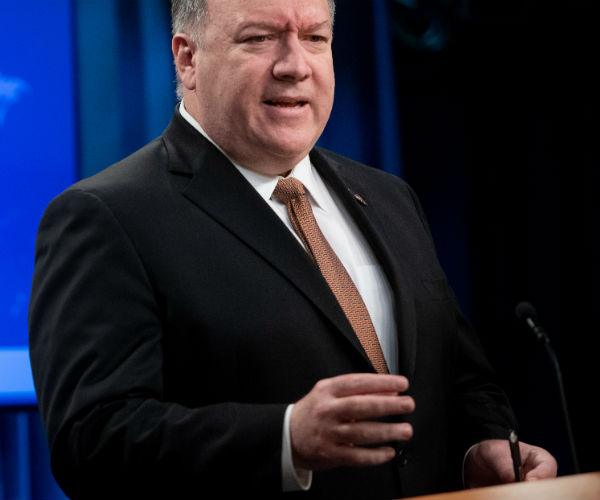 As of Monday, April 15, 2019, the official designation of the Islamic Revolutionary Guard Corps (IRGC) as a Foreign Terrorist Organization took effect.

The Middle East Media Research Institute (MEMRI) reports the impact of the IRGC designation — economically and militarily, both within Iran and on the regional and international level.

According to MEMRI, the president’s designation of the IRGC as an FTO blocks Tehran’s activity within Iraq and Syria, which is being carried out by the IRGC: Iran is working to exploit Iraq’s banking, construction, trade, and energy, as a platform for getting around sanctions on Iran.

Regarding the military aspect of designating the IRGC as an FTO, Tehran might persuade Shi’ite militias in Iraq to attack U.S. interests. MEMRI quotes IRGC Commander Mohammad Ali Jafari’s warning on April 7, designating the IRGC, will harm Iran’s national security, and bring “disquiet for American forces in the region.”

In view of the MEMRI reports, consider statements by Matthew Levitt of The Washington Institute for Near East Policy in the Iran Primer. He once worked as deputy assistant secretary for intelligence and analysis at the Treasury Department.

“What Will the…IRGC designation actually do?” asks Levitt. He holds President Trump’s designation of the IRGC does not signal much of a change in policy.

“Designating the IRGC in its entirety (beyond just the Qods Force) as an FTO increases the odds that the group lashes out with terrorist or military attacks,” argues Levitt.

But Alireza Jafarzadeh, of the National Council of Resistance of Iran, (NCRI), has a different view.

In an interview with the author, he stated, “The usual hollow show of force and empty rhetoric by IRGC military commanders brings to mind men whistling past the graveyard. The Ayatollahs only understand the language of force and back down when confronted with firmness.”

“Tehran is much weaker now than it was a year ago in light of the continued protests and strikes all over the country, loss of 70 percent of its currency value, at least 40 percent inflation and 50 percent unemployment rates,” Jafarzadeh added.

But why is Tehran making so much noise? The new designation has serious consequences, as the ruling clerics see it.

The new authorities that State’s FTO designation adds beyond those already imposed are visa restrictions and stronger criminal punishments. It imposes immigration restrictions on members of the IRGC and all affiliate entities. So, anyone ever associated with the IRGC can now be excluded from entering the United States.

The FTO designation triggers a criminal prohibition for knowingly providing material support or resources to the IRGC and its vast network of organizations, financial institutions, businesses, and companies.

The added terrorism designation layer demoralizes the IRGC and its proxies while enhancing the morale of the Iranian people who have taken to streets to protest the Guard as repressive and corrupt.

First, President Trump: Instruct State to redesignate another tool of terrorism of Iran, namely the Ministry of Intelligence and Security, MOIS, as an FTO. It qualifies to be designated as an FTO and is already designated in the category of “Specially Designated Global Terrorists” (SDGT).

The FTO designation of MOIS allows the Department of Justice to prosecute U.S. persons who provide material support to the MOIS, as well as barring any of its members or associates from entering the United States.

And, yes there are undoubtedly many such persons, as two of them were arrested during August 2018 for spying on two members of the NCRI for “capture and kill operations,” in Washington.

Second, President Trump: Place maximum pressure on Iran via economic sanctions, because Tehran is seeking to exploit its ties to Baghdad’s banking, construction, trade, and energy.

Third, President Trump: Task your NSC to identify all affiliate entities of the IRGC and the Qods Force and apply sanctions to them, including those U.S. persons who are providing “material support” to the IRGC, its partner organizations like the MOIS, as well as all other entities associated with the IRGC.

The benefits of designations outweigh the risks of doing so. There is scant likelihood that the IRGC and Qods Force would attack U.S. Special forces in Syria, although Iranian-aligned Shiite militias might consider doing so in Iraq.

But Tehran has been attacking Americans for years and is already responsible for the death of thousands of U.S. citizens in Iraq, Afghanistan, Lebanon, and Saudi Arabia.

Now is the time to get on the offensive, as the best defense is a good offense. We maintain credible “escalation dominance,” in the Indian Ocean/Persian Gulf area of U.S. naval operations, and President Trump is likely to continue our supremacy.

Prof. Raymond Tanter (@AmericanCHR) served as a senior member on the Middle East Desk of the National Security Council staff in the Reagan-Bush administration, Personal Representative of the Secretary of Defense to international security and arms control talks in Europe, and is now Professor Emeritus at the University of Michigan. Tanter is on the comprehensive list of conservative writers and columnists who appear in The Wall Street Journal, Townhall.com, National Review, The Weekly Standard, Human Events, The American Spectator, and now in Newsmax. To read more of his reports — Click Here Now.