Iran’s Mullahs Have No Answers 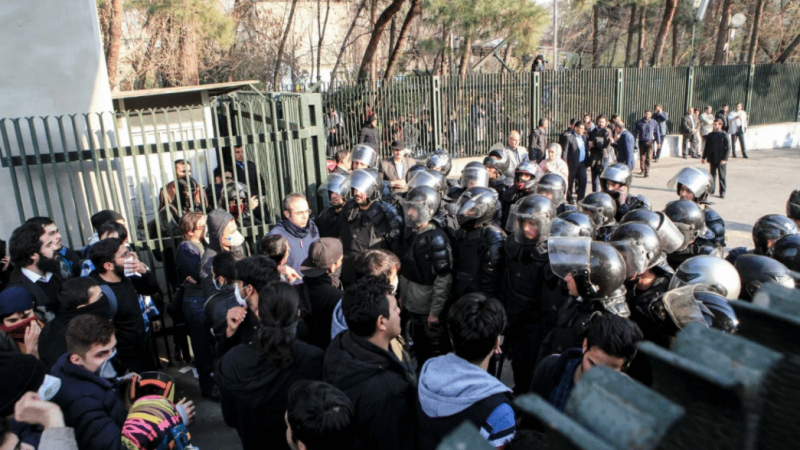 On Dec. 31, 1977, then-U.S. President Jimmy Carter toasted the Shah’s Iran as “an island of stability in one of the more troubled areas of the world.” Days later, anti-government protests erupted in the Holy city of Qom. Several months would pass before chants of “death to the Shah” became popular. Thirteen months later, the Shah fell, on Feb. 11, 1979.

In November 1978, like many other young Iranians active in the anti-Shah movement in the United States, I traveled from Los Angeles to the small but beautiful village of Neauphle-le-Château, southwest of Paris. A relatively unknown cleric named Ruhollah Khomeini had relocated there a month earlier. Unbeknownst to us, he would later return to Iran as the “Supreme Leader.”

In France, Khomeini recorded inflammatory speeches for distribution by the thousands through a sizeable network of mosques. The best technology available at the time allowed young supporters to duplicate one cassette tape every three minutes.

During my stint at Khomeini’s compound, I watched the demagogue walk across the street to pray under an apple tree and make sweeping statements about how Iranians would be allowed to determine their own future and that the  mullahs would go back to the mosque. But even then, his promises had a hollow ring. The future dictator, of course, lied.

Fast forward 39 years to the latest mass uprising against the “Islamic” state Khomeini left behind. The first demonstrations erupted in Mashhad on Dec. 28, 2017. The initial spark was skyrocketing inflation and food prices. This time, in less than two hours, chants of “death to Khamenei” (Khomeini’s successor) were widespread.

The jaw-dropping pace of that transformation attests to the effects of the Information Age. The new message spread organically among the disenchanted population, many of whom own smartphones. Communication largely focused on the popular Telegram messaging app.

The uprising caught the theocratic regime by surprise, and was almost as much of a shock to the pundits in Washington. Despite the decades of evidence, some commentators still seem to cling to Jimmy Carter’s blind optimism. They paint the current Iranian president as a moderate who can be trusted to spearhead changes inside the theocratic regime.

This myth was shattered by the protesters. Chanting “moderates, hardliners, the game is now over,” the public made it clear that they reject both the “reformists” and “hardliners,” who equally profess allegiance to the system of absolute clerical rule. Iran’s people want regime change.

Also contrary to the prevalent narrative in the West, the uprising was neither leaderless nor spontaneous. The lightning speed with which the protests spread nationwide, their coordinated tactics, and their unified message signaled a forward-thinking, organized and sophisticated opposition movement – a viable alternative to the ruling theocracy. Domestic support for the National Council of Resistance of Iran (NCRI) and its main component the Mujahedin-e Khalq (MEK), was evident in demonstrations in 142 Iranian cities and towns.

The Supreme Leader took the unusual step of acknowledging the leading role played by MEK activists. “These incidents had been organized, and the MEK implemented the plans,” Ali Khamenei said on Jan. 9. “The MEK had prepared for this months ago and its media outlets had called for it.” A week before, President Hassan Rouhani had called his French counterpart, complaining about the presence of the NCRI leader, Maryam Rajavi, in France.

The MEK has paid a heavy price in its campaign for democracy. Some 120,000 MEK members and sympathizers have been executed, among them my older brother, Hossein. We shared an apartment just across from the UCLA Campus where I studied Sociology in the ‘70s.

While Khomeini spoke in generalities during the revolution in the 1970s, careful not to commit to specific measures, Mrs. Rajavi has laid out a very specific 10-point plan for the future of Iran. It advocates universal suffrage, free elections, gender and religious equality, abolition of Sharia law and the death penalty, separation of religion and state, adherence to private property and a market economy, and a non-nuclear republic. The NCRI has a presence worldwide, a recognizable leader and platform, and bipartisan support in almost every major European legislature and in the U.S Congress.

The Shah was unable to resolve the underlying factors that led to his overthrow – the gulf between rich and the poor, endemic corruption, the excesses of the royal family, and of course the repression by the notorious secret police, SAVAK. The mullahs’ regime will likewise prove unwilling to, and incapable of, addressing the legitimate, deep-seated grievances of tens of millions of Iranians who are a dozen times worse off than their parents and grandparents were under the Shah.

The Iranian people appear determined to see the demise of the current dictatorship before its 40th birthday. The Shah’s “island of stability” is the mullahs’ house of cards.