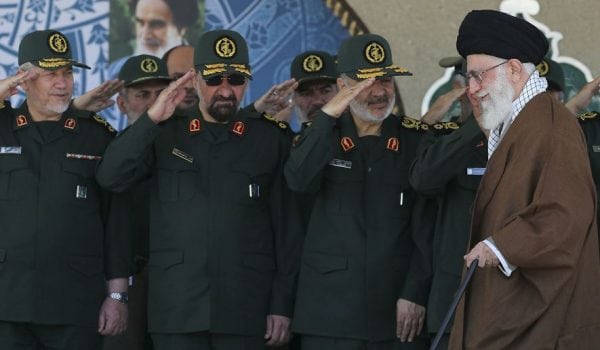 Iran has spent up to $100 billion the last five years financing operations in Syria that were instrumental in keeping President Bashar Assad in power, according to a new book on the hard-line Islamic theocracy’s vast business holdings and wealth.

The book, “Iran: The Rise of the Revolutionary Guard’s Financial Empire,” estimates that Iran has paid nearly $100 million a year in salaries to a grab-bag of mercenaries it sent to Syria under the direction of the notorious Quds Force.

Iran’s major meddling in Syria has come as the Shiite-dominated regime is directing its largest arms buildup in its history, focusing on new missiles and ways to deploy forces into regional conflicts, such as Syria’s civil war.

“Iran” the book was released Wednesday by the Islamic Republic’s largest internal dissident group — the National Council of Resistance of Iran, which includes the operational People’s Mujahedin of Iran (MEK).

The study’s purpose is two-fold: First, document a major corporate and money grab by Supreme Leader Ayatollah Ali Khamenei and the Islamic Revolution Guard Corps (IRGC), a military branch that exports terrorism and tenaciously protects all aspects of the mullahs’ rule over 79 million people.

“Khamenei’s office has devoured virtually everything that matters,” the book says.

The study’s purpose is two-fold: First, document a major corporate and money grab by Supreme Leader Ayatollah Ali Khamenei and the Islamic Revolution Guard Corps (IRGC), a military branch that exports terrorism and tenaciously protects all aspects of the mullahs’ rule over 79 million people.

“Khamenei’s office has devoured virtually everything that matters,” the book says.

Second, it is a warning to the West. Investments in the post-Joint Comprehensive Plan of Action the 2015 nuclear deal hammered out by the Barack Obama administration will not enliven the private sector but will increase the holdings of the ayatollah and the IRGC — a tandem the U.S. calls the largest state sponsor of terrorism in the world.

“The book is intended to show that, behind the veneer of the official banks and seemingly benign companies, lies a web of institutions controlled by the Supreme Leader Ali Khamenei and his ideological terrorist arm, the Revolutionary Guard Corps,” said Alireza Jafarzadeh, deputy director of the dissident group’s Washington office.

The ayatollah has consolidated his real estate and corporate empire, everything from gas and oil to bread and chickens, into his headquarters, the Sedat. His net wealth, Reuters estimated in 2013, stood at nearly $100 billion.

Since 2005, Ayatollah Khamenei and the IRGC accomplished this confiscation by transferring assets into a euphemistically named “cooperatives,” which are nothing more than stated-owned.

IRGC’s cooperative is in the form of a foundation that controls automobile factories, construction firms and other assets. The IRGC has its own domestic enforcer, the Bassij, and it too controls a large business and land portfolio.

“The implications of this stunning power-grab are better grasped in light of the fact that these institutions exercise virtually absolute control of all decision-making processes, legislative mechanisms, intelligence gathering and access to significant budgetary commitments,” the dissidents write.

“Foreign investors cannot in practical terms avoid entanglement by affiliation in the Iranian regime’s behavior, including its support for terrorism, continued aggressive policies towards regional countries, manufacture and testing of ballistic missiles, and systematic egregious human rights violations inside Iran,” the book argues.

In reality, it says, “the back-breaking control of the regime over the entire economic system and the astonishing growth of extremely disruptive and obstructive rules and regulations severely limit freedom of action, leaving little or no room for genuine free-market competition in Iran.”

Dissidents say the Joint Comprehensive Plan of Action has further emboldened Iran, as opposed to moderating its expansion-minded leaders. Crackdowns and hangings of opposition figures have increased.

And Iran’s adventures aboard have expanded. It has build an army of 100,000 Shiite militiamen in Iraq, a force that is used to fight the Islamic State but also can be called upon to keep the Iraqi government in line with Tehran’s priorities. As mentioned, Iran went all-in in Syria. The MEK blames the Quds Force for many of the atrocities in and around the rubbled city of Aleppo.

All the while, Iran has remained in perpetual recession, with double-digit inflation and unemployment. It’s poverty rate, says the World Bank, is 9 percent based on a poverty line of least $5.50 a day. The U.S. poverty rate is $24,250 for a family of four.

The World Bank is predicting 4 percent economic growth this year due to new foreign investment.

The book “Iran” says the West is falling for Iran’s argument that sanctions stifled its state-directed economy.

“International sanctions were never the cause of Iran’s economic ills, which is why their lifting has not provided the cure,” it says. “There are systemic, entrenched forces at play that have to do with the nature and sociopolitical roots of the political system in power today.”

Where is Ayatollah Khamenei spending his new-found wealth?

A priority is ballistic missiles, some of which are capable of carrying nuclear warheads. The book estimates that Iranhas spent $11 billion alone on ICBMs from rogue state North Korea, based on a 2009 agreement.

It all adds up, the dissidents say, to “an economy allocated to terrorism, suppression and warmongering.”

The group’s estimate for the billions spent in Syria comes from analyzing the salaries of the thousands of fighters Iranpays and the cost of operations. There is no official government budget number.

The security spending has increased from 17 percent share of the annual budget to 30 percent today, squeezing out public welfare and infrastructure.

“This rising trend is further proof of the hypothesis presented in this book that the overhaul of the Iranian economy is geared towards ensuring the survival of the velayat-e faqih system.”

“Velayat-e faqih” is the Persian name for the Islamic government and its justification for economic control, as expounded by the Iranian revolution’s first leader, Ayatollah Ruhollah Khomeini, who seized power in 1979. Current leader Ayatollah Khamenei recently said that same revolution continues today.

The environment has not been spared. The regime’s perchance for building dams and redirecting rivers has destroyed water resources, such as Lake Urmia, which today is a dry bed of salt.

“It results from a willful calculation to ensure the survival of a regime that has brought about the collapse of the country’s natural resources,” the book says.

Iran, Terrorism and the Rise of the Revolutionary Guards' Financial Empire
Comment
Let Us Turn the New Year Into the Year of Defeat for the Velayat-E Faqih Religious Fascism in Iran and the Region