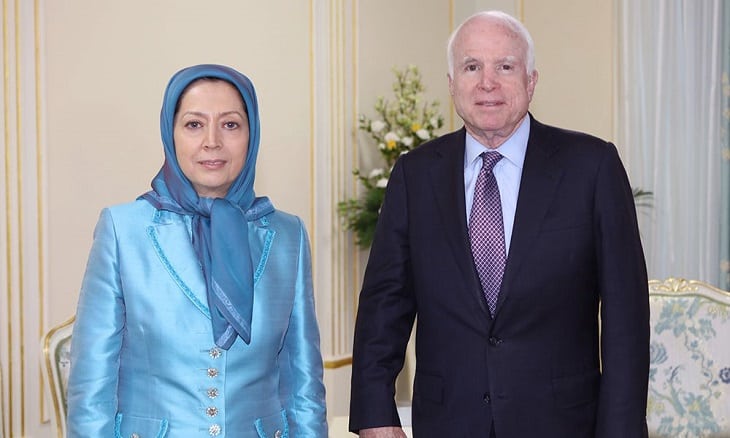 On April 14, 2017, Senator John McCain (R-AZ), the Chairman of the Senate Armed Services Committee, met in Tirana, Albania, with Mrs. Maryam Rajavi, the President-elect of the National Council of Resistance of Iran (NCRI) and discussed the latest developments in Iran, the clerical regime’s nefarious meddling in the Middle East region and prospects for the future.

Prior to the meeting, Senator McCain visited one of the centers of the People’s Mojahedin Organization of Iran (PMOI/MEK) in Tirana and met with the PMOI/MEK members who were relocated to Albania from Camp Liberty, Iraq.

Senator McCain congratulated their successful transfer from Iraq and praised the perseverance and steadfastness of the members of the resistance and their huge sacrifices. “There is no doubt that people in this room have suffered not only themselves, but in the loss of their loved ones because of the Iranian tyranny. You have stood up, fought, and sacrificed for freedom, for the right to live free, for the right to determine your future, for the right that is God given. …I thank you for being an example; an example to the whole world that those people who are willing to fight and sacrifice for freedom, will achieve it and you are an example to everyone in the world who is struggling for it,” Mr. McCain said. While expressing his condolences to the victims of the mullahs’ tyranny, he thanked the government of Albania for accepting the PMOI/MEK members.

Senator McCain praised the leadership of Mrs. Rajavi, while emphasizing, “Someday Iran will be free and someday we will gather in freedom square in Tehran.”

During the meeting, Mrs. Rajavi thanked Senator McCain for his relentless endeavors in support of the safe transfer of members of the PMOI/MEK (previously the residents of Camp Ashraf, Iraq), to outside of Iraq.

The NCRI President-elect pointed out, “Today, there is consensus on the destructive role of the clerical regime in the region and that the religious fascism ruling Iran is the main source of war, terrorism, crisis in the Middle East.” She underscored that regime change in Iran is not only indispensable to ending the flagrant violations of human rights in Iran, but also is necessary for eradicating war and crisis and establishing peace and tranquility in the region. As long as the clerical regime is in power, Mrs. Rajavi said, it will not stop its export of terrorism and fundamentalism.

Mrs. Rajavi added that from all indications the clerical regime is engulfed in social, political, and economic deadlock. The Iranian people and the resistance are more determined and prepared than ever to overthrow the ruling theocracy and to establish democracy and national sovereignty in Iran, she said.

The Iranian Presidential Election: Pick Your Poison
Comment
Press Conference on the Status of the Iranian Regime's Nuclear Bomb Making Apparatus Details to Be Revealed