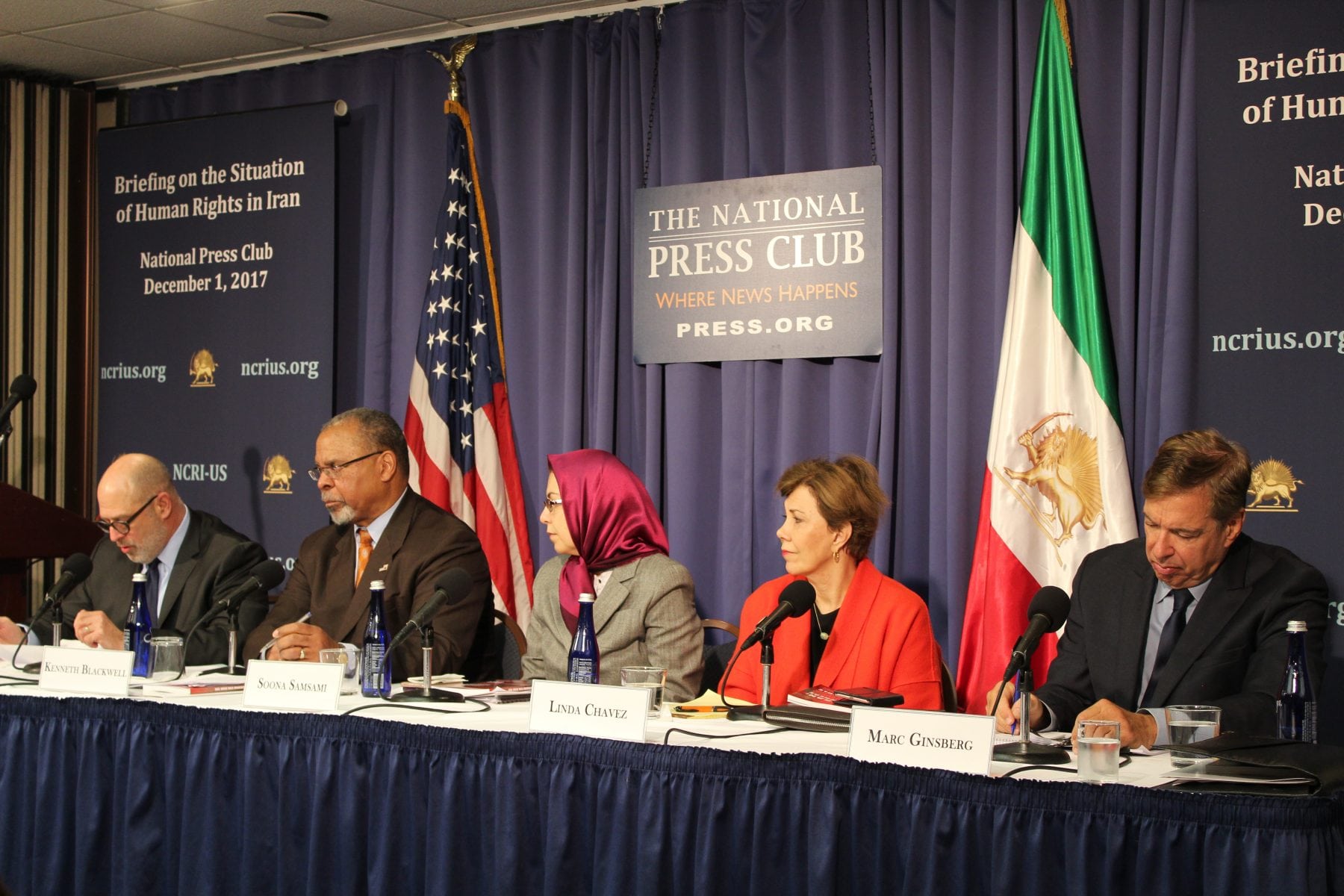 WASHINGTON, Dec. 4, 2017 /PRNewswire-USNewswire/ — In a panel at the National Press Club by the Washington Office of the National Council of Resistance of Iran (NCRI-US), human rights experts called for accountability for Iranian regime’s human rights abuses.

Referring to NCRI’s newly released book, “Iran, Where Mass Murderers Rule, The 1988 Massacre of 30,000 Political Prisoners and the Continuing Atrocities,” former U.S. Ambassador to the United Nations Human Rights Commission, Kenneth Blackwell, called for accountability into the 1988 massacre to “put pressure on the regime to give access so that we might shine light on the evils that were done… [to give] hope to [those] inside Iran.” Blackwell added, “our delegation at the U.N. [should] continue to be a leading voice, not only on international terrorism…by the regime, but …to bring justice to a regime … that is a threat to the basic fabric of humanity across the globe.”

Former Director of the White House Office of Public Liaison, Linda Chavez, referred to the role of women in the opposition. “It is no accident,” that Iran’s opposition movement “is led by a woman, Madame Maryam Rajavi. She stands as a real affront to this regime. The regime hates and fears the MEK [Mujahedin-e Khalq] because in the MEK women … are allowed to lead others. And men are willing to listen and to follow them; a major threat to a regime that wants to imprison half its people.”

NCRI’s U.S. Representative, Soona Samsami said, “why the regime continues to perpetrate such atrocities and continuing? The answer is simple; it fears its population. Despite harsh crackdown, Tehran has been unable to extinguish the Iranian people’s yearning for change, freedom, and human rights.”

Former U.S. Ambassador to Morocco, Marc Ginsberg emphasized, “The violation of human rights has become an inconvenient truth to those who have decided that the Iran nuclear agreement is what begins and ends our engagement with Iran… We need to begin holding Iran accountable.”

Former U.S. Ambassador to Bahrain, Adam Ereli, said, “Many of the perpetrators of this crime are in positions of high authority and this has produced a culture of impunity that Iran’s rulers exploit to continue arresting, torturing, and murdering at will and without consequences or penalty… The only way to stop rogue regimes from using terror and murder as tools of their rule is to hold them accountable for their crimes.”