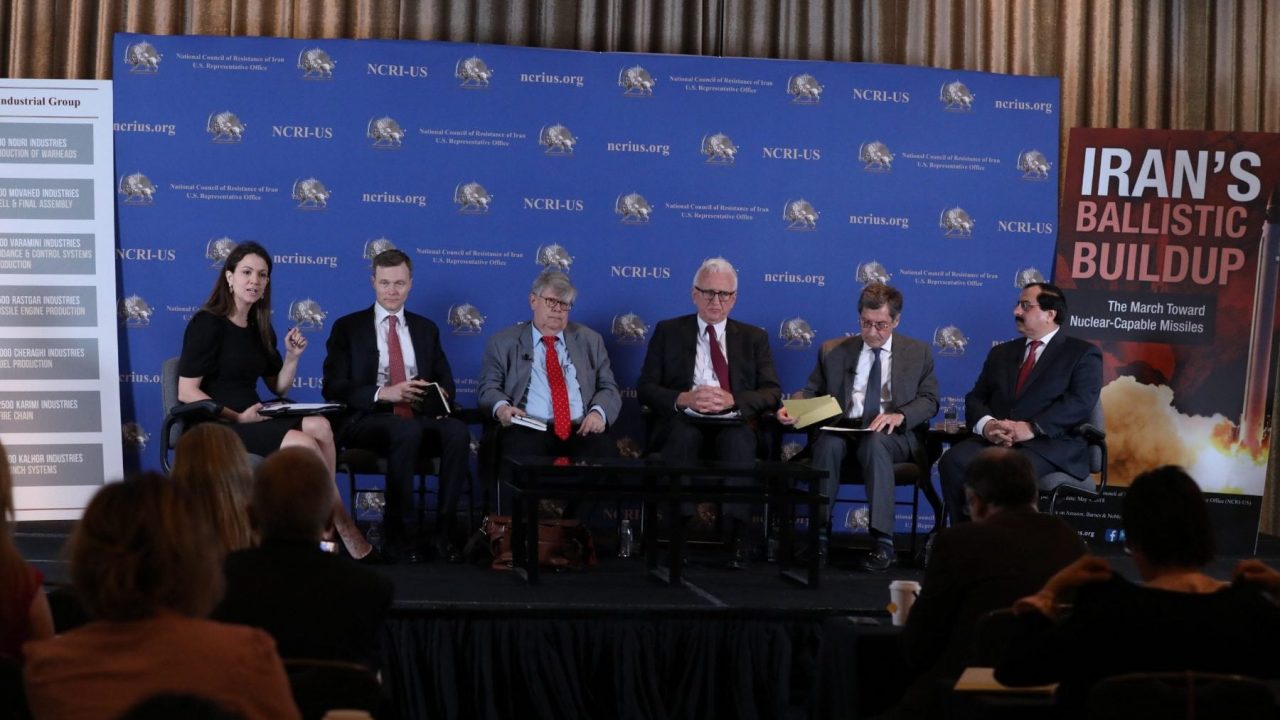 WASHINGTON, DC – On Wednesday, May 9, 2018, the National Council of Resistance of Iran-U.S. Representative Office (NCRI-US) hosted a panel of leading subject-matter experts to discuss Iran’s burgeoning missile program and its ties with the nuclear weapons program.

The new 133-page book by the NCRI-US, Iran’s Ballistic Buildup: The March Toward Nuclear-Capable Missiles, was also presented by Alireza Jafarzadeh, the deputy director of the NCRI’s Washington Office. The book, which has dozens of charts, pictures, satellite imageries, and maps, provides key details on crucial infrastructure of Tehran’s ballistic missile program.

Ambassador Joseph DeTrani, former Director of National Counter Proliferation Center and Special Adviser to the Director of National Intelligence; Dr. Olli Heinonen, a Senior Advisor on Science and Nonproliferation at the Foundation for Defense of Democracies, and former Deputy Director General of the International Atomic Energy Agency (IAEA), and head of its Department of Safeguards; Ambassador Robert Joseph, former Under Secretary of State for Arms Control and International Security; and Matthew Kroenig, Associate Professor, Edmund A. Walsh School of Foreign Service at Georgetown University, Deputy Director for Strategy, Scowcroft Center for Strategy and Security at The Atlantic Council, were the other panelists. Rebeccah Heinrichs, Senior Fellow at the Hudson Institute moderated the event, after Ali Safavi of the Foreign Affairs Committee of the NCRI welcomed the panelists.

Alireza Jafarzadeh, who is also the author of The Iran Threat, explained the strategy framework designed to ensure the survival of Iran’s ruling regime and its core elements.  He said, “To remain in power, the regime in Tehran functions on two foundations.  One is internal suppression and the other is crisis making and export of terror abroad. The second pillar has three components itself which complement each other and are all part and parcel of the larger strategy for survival.  One would not work without the other.  First component is sponsorship of terrorism.  The second element is Iran’s nuclear weapons program.  And the third element is the ballistic missile program. For Tehran, these are critical issues for its survival; that’s why it has never abandoned any of them, and it never will.”

Exposing the details of the inner working of the regime’s Aerospace Industries Organization, the Hemmat Missile Industrial Group, and Aerospace Force of the IRGC, Mr. Jafarzadeh stated, “there are 15 sites associated with the Aerospace Industries Organization and 27 sites associated with Aerospace Force of the IRGC.” He provided the names, specific functions and their internal codenames, command and control structure, and location of these sites.

Jafarzadeh concluded his presentation by saying, “The Iranian regime right now is engulfed in large scale protests and uprising that started last December and is still continuing. The economy is in shambles, currency is plunging further, and there’s extensive institutionalized corruption.  So, the long-term and lasting solution to the threat posed by Tehran is internal change.  The people inside Iran are calling for change by the people of Iran.  That’s when we’re going to see those three threats resolved.”

Ambassador Joseph, noting the failure of the 2015 deal “to address Iran’s regional aggression and its activities in Syria, in Yemen, and elsewhere., and of course, Iran’s continued support for terrorism,” explained that “In the past, when Iran has been presented with strength in opposition to its ambitions, it has backed down.  It did that in 2003 and it’s done that since 2003.  Iran, I think, will once again feel the full pressure of international sanctions.”

He concluded his remarks by saying “the most important part of the President’s statement was his outreach to the Iranian people and his stated support for their aspirations, for democracy, and for human rights.  This is the number one threat to the regime—a regime that cannot reform and will not reform.  And I think ultimately it will be the end of this regime that resolves the nuclear and missile threats as well as the broader Iranian threats.”

“A lot of the underpinning of the JCPOA was it was going to be transformational, that it would be an incentive for Iran to change its behavior. And it certainly hasn’t been transformational because we’ve seen the [Iran’s] regional aggression, we’ve seen the elements of support to terrorist movements, and other aspects to that,” added Mr. DeTrani.

Professor Kroenig of the Atlantic Council commented on the NCRI-US new book, Iran’s Ballistic Buildup: The March Toward Nuclear-Capable Missiles and said “It’s the most informative account I’ve seen of the Iran ballistic missile program… it is a major contribution to our understanding of Iranian security policies, missile program, so I would highly recommend it.”

Professor Kroenig concluded “The benefit of pulling out is that the United States can really bring back significant economic and political pressure on the regime to force them to the table… I’m hoping that a maximum pressure and engagement strategy for Iran could have a similar outcome, bring Iran to the table to discuss a deal that doesn’t just kick the can down the road, but eliminates this nuclear and missile threat.

Dr. Heinonen remarked that “The first step for the international community, since the JCPOA is still [in place even though] U.S. has left it, to ask Iran to explain what is there, let the IAEA go to see the rest of the equipment and rest of the materials, and then do the proper verification to ensure them that Iran is in full compliance.

“We should take note of those things, fix the JCPOA, look at how it can be (adjusted) in such a way that it includes adequate provisions to deter Iran to produce nuclear weapons material in short period of time. Get to the bottom of the missile program. And thirdly, visit those sunset provisions and make sure also that the IAEA has adequate authority to have an access also to the people, equipment, and military sites upon the need and with sophistication so that we can get assurances that Iran is fully complying its NPT and JCPOA obligations without any doubt,” he said.

Heinrichs concluded, “there was not a change in the nature of the regime before Iran was given the stamp of approval on their enrichment program and flooded with cash and basically legitimized as a legitimate nation-state again, which is what the JCPOA did. I think those are the two big things that the agreement did—legitimize the country, flooded it with cash, and allowed it to continue its malign activities but with more money.”